And Now For Something Completely Different 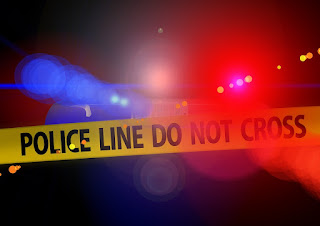 When we talk about our El Galeon time, people often ask us how we managed to get our positions aboard. I tell them I lucked out - I was in the right place at the right time. I was picking up my mail, and chatting with the person next to me...who turned out to be the ship's business manager. Who invited us to see the ship; then to come back for a photo shoot; then next thing we knew, it was "bring your passport, you're in bunk #10 on the starboard side, we're going sailing."

Just because we couldn't spend this summer on El Galeon due to Dan's hip issue doesn't mean I won't be having adventures and learning new things and having a novel answer if I were to write a "How I Spent My Summer Vacation" essay in adult life the way we used to on our first day back in school every September. And once again, I was at the right place at the right time to learn about a cool opportunity. For the next 12 weeks I'll be going behind the scenes at the St John's County Sheriff's office, learning everything from driving a cop car in the rain, to how interrogations of suspects really work, processing a crime scene, and how they make a split-second shoot/don't shoot decision. (Is that guy pointing an iPhone at you, or a gun? Do you assume a different answer if he's black or if he's white?) I'll ride along with an officer on a patrol shift, and sit in the 911 call center.

Last night was our first class, orientation. It was mostly introductions and logistics, but there were also several inspiring stories. The course coordinator told us that he was fourth-generation law enforcement in Florida -- his great-grandfather was the sheriff in neighboring Palatka, Putnam County; grandfather, father, and uncles were variously police and firefighters, and then here he was, a 20+ year veteran with the sheriff's office in St Augustine in St John's County. His career, he said, spanned the wide range of activities the office is associated with, from the adrenaline rush of the S.W.A.T. team, and what he called the "hard-charging" bomb squad and dive team, to the warm fuzziness of handing out teddy bears to traumatized children. The stories he told spanned an equally wide range. He told us about the time he was part of a team that staged a "bank robbery" as part of a training, and how none of the eye witnesses were able to provide reliable accounts of pretty much anything they saw. He told the sad story of one arrest gone wrong with the best of intentions as the arresting officer tried to treat the woman he was arresting with respect; she had soiled herself in the stress of the moment, and the deputy gave her the chance to keep her dignity and go clean herself up before she was taken to the holding area, but she shot herself instead.

The 35 attendees introduced themselves and their reasons for being in the class. A few were ex-military or contemplating careers in law enforcement, others were members of neighborhood HOAs, still others were just curious. I was particularly touched by one woman's story. She was the mother of three adopted African-American kids who were just coming into their rebellious years, distrusting police and concerned about being judged more harshly because of their skin color. Me, I can't exactly say why I was so intrigued to be in the course. I grew up very insulated in an upper-middle-class bubble. (Did you? Check out this interesting quiz.) So this was going to give me exposure to a world I knew nothing about except in novels, and characters I wouldn't otherwise have any chance to meet other than in the stories of the district court judge who was my carpool-mate during my Washington, DC days. We'd entertain each other on the long traffic-filled ride home with stories from our respective work days. He'd tell me about the most outrageous delinquents he saw in the courtroom, and I'd tell him about what was really in his drinking water. My other reason for interest in the class is that I'm an engineer, I love to know how things work. The cool analytical aspects of processing a crime scene will appeal to my science background. I'm curious about the detective work that investigates internet crimes or child porn, and there's even a session on the shooting range. I've shot a shotgun at an empty beer can a friend placed on a fence post for me, but that's about it so far. But I'm also fascinated with the tensions that my classmate listed as her reason for participating. People, on both sides, are not monolithic blocs, and I'm anticipating learning that many situations are more complex than our sound-bitey media portray. I think it's going to be enlightening. Oh, and fun --admittedly I also want to drive a car really fast, and play with the sirens and flashing lights.
Posted by Dan N Jaye at 22:00