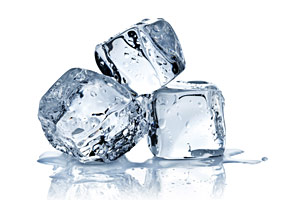 Around 20 years ago, we kicked around the idea of retiring really early (we'd have been in our 40s), and living aboard Cinderella in the Virgin Islands. To supplement our income, in this fantasy, I'd learn marine refrigeration and air conditioning. Surely there'd be lots of demand for that particular service in the tropics! And it would fit nicely with my science background. I had known the theory of the refrigeration cycle since thermodynamics in college, so it would be a matter of working through the practical applications. I imagined it being both fun and profitable. I even named the business in my mind. Refrigeration girl? Ice Queen!

Although our lives didn't end up going in that direction, I've still always been intrigued by the process of making cold. It has an element of magic in a way that making heat doesn't. Humans have known fire and been making heat, by burning something, for thousands of years; we've only been making cold for a little over a hundred.  (Yes, we've had ice blocks and ice houses for longer than that, but that isn't actually making cold, that's mining it like a resource during the winter and storing it for the summer.)

The practical knowledge would have been nice to have. In the last year or so we've had one problem or another with either our air conditioning system or the refrigerator, it seems every couple of months. Last year, after our marina was partially destroyed during Hurricane Irma, we lived at anchor for several weeks. Fortunately the weather was benign during that time. South of town where we anchored was a nice combination of airy and protected. It was peaceful, with dolphins and pelicans for entertainment. Making our own power with solar, we were better off than friends in town who were in some cases still without power. It would have been a nice relaxing time to catch up on our reading and do some creative cooking, except the fridge was broken. Logistics and other complications of our location made it impractical to get to the store more than once or twice a week for fresh food, so we learned to make do with the fridge-less life, a bit of a challenge for people who love to play with food. We managed a small ice box for protein sources like cheese, eggs, yogurt, fish, and tofu, and explored canned food, dried beans and rice and pasta, powdered milk, and sturdy vegetables like carrots and cabbage. I now have 14 different classes of recipes featuring canned tuna.

I expected to feel really, really frustrated by this, on top of the stress of the hurricane. But we discovered something interesting over time. Dan described living without a fridge as "liberating." He meant it in two ways. It was liberating in that the fridge is often the biggest power draw on the boat. We chose the model fridge we did because it was just about the quietest and most energy efficient style on the market at the time (pretty much still is, shout-out to our 12-V keel cooler) and sized our solar panels to be able to generally make enough power to run it as long as the days are mostly sunny. But it's a close thing, and we have to be very attentive to our other power uses (lights, stereo, computers) so we don't go over our power budget for the day. Suddenly, without the fridge, we had loads of excess power. We didn't have to budget it, or watch the battery monitor, or just even think about it. Liberating. You know what else was liberating? In meal planning, we always have in the back of our minds, a running list of which foods are getting ready to go spoil and must be used soonest. Sometimes that leads to odd combinations of flavors as we prioritize, and sometimes we're just a step away from a cookbook that a cruising acquaintance fantasized about writing that would be called, "Cooking with Rotten Fruits and Vegetables."  We were pretty much liberated from that as well. On Day 1 and 2 after grocery shopping we might have broccoli or spinach, but after that it pretty much didn't matter, as everything that remained was shelf stable and we could eat it whenever. It was surprising that we'd never really noticed that nagging little voice in the back of our minds, until it was gone.

After our third service call on the unit in just over a year, our awesome marine refrigeration tech Chris cut into his own profits by teaching me how to charge the unit myself. I know, the real solution is replacement, and we've got that on next year's schedule. Hey, the thing is 15 years old, even a land refrigerator doesn't have a much longer life span than that. So we're just trying to limp this unit along until our haulout next year. Knowledge, self-reliance, independence? Most liberating of all!