And Here We Go!

About 3 weeks ago, I posted on Life Afloat's facebook page a photo of the utter chaos that is our main cabin, with an insanity of provisions yet to be stowed.  It didn't look much better yesterday, but we followed the advice of friend Debbie when we were leaving for our first cruise: "Get Off The Dock!."  Pick a day and go.  You'll never be 100% ready, she said, but if this is to be your new life, then live it.  She advised us to just go around the corner to a nearby anchorage, drop the hook, and do all the stowing there.  At least we would have begun the adventure.

So yesterday, that's what we did.  We had already sold our cars and given up our marina slip, the last "things" that tied us to land.  We motored away from our (former!) marina, in pretty weather, but no wind, hence the motor instead of sailing, and headed for the Rhode River.  We would join the SSCA gam (sailors/boats gathering) and at the same time, just hang out and organize our stuff.  Two other boats would join us, and after the gam, weather permitting, we'd start our southbound journey in earnest on Monday.

I'm really struggling with the idea of leaving, this time.  Previous trips were just winter commutes; our cars and marina slip were waiting for us when we got back "home."  But this time is different, as everything we own is with us, except for the sentimental heirlooms in long-term storage with friends in Pennsylvania.  The good thing about this impending rootlessness is that travel is, after all, what boats are for.  The bad thing is that I haven't found in our travels any place I'd rather be than Annapolis.  Sure, Florida was fun and Aruba was beautiful, but culturally the Annapolis/Washington DC area is where I feel at home.  Its weird that we don't have that many friends of the deep friendship kind here, though we have many friends of convenience, and many of our deep friends have moved on.  But still, random people I meet are more likely to share my values than are random people I meet in, say, Wyoming.

As we went about our last days, we had been commenting to each other, "Wow, I sure won't miss THAT," while pointing to things like our neighbor the hoarder or the other neighbor with the stinky cigars, or town politics or our sketchy internet connection or the bad water quality in the creek.  I don't like this negative attitude in myself.  Partly I think this finding flaws in our living situation is our way of easing the ache of pulling up those roots, and intentionally self-serving "sour grapes" attitude that we're doing to ourselves just now, these things were only tiny annoyances before.  I wonder, though, if its really the opposite: have we always had to have a protective Pollyanna shield to make life here pleasant, and are we now for the first time seeing our town having taken off the rose-colored glasses we've worn for the last 11 years?

More than anything, what I think I'll miss is what writer Mary LoVerde calls being known.  But at the same time, I am also attracted to Suzanne's statement that she would never again lock herself into an annual marina contract, because it would prevent her from moving when she was ready to.  My friend Stuart says that the best guarantee of successful cruising and living aboard is to own nothing -- NOTHING -- on land.  That's the only way you can truly be mobile, no strings at all.

Its crazy, when people ask us our plans.  They are so nebulous.  We hope to return to St Augustine for the holidays.  After that, well, it depends on how the winter weather shapes up.  If its cold, we're going to head further south, maybe the Florida Keys or the Gulf Coast.  If it's warm, we'll hang out, and maybe do the northern Bahamas in the spring.  We have every intention of coming back to Annapolis, probably in about a year and a half.  But first, I want to explore the southern Chesapeake Bay next summer, and North Carolina's Outer Banks.  I want to try for a while to live in this un-anchored way.
Posted by Dan N Jaye at 16:07 2 comments:

My bloggy colleagues over at The Monkey's Fist are making posts for the wonderfully helpful topic of things that make life aboard better and of course I love lists, and tips that promise to make my life better, so I had to join in!  Hmm, things that make my life aboard better ... let's see, a cold alcoholic beverage, a bright sunny day, 10-15 knots of breeze on the starboard quarter ... Nevermind.

Over the years we've done a lot of improvising, new uses for items the manufacturer never dreamed of, to solve the unique problems of living aboard.  Here are a few: 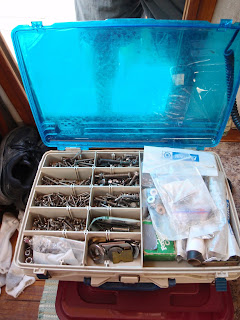 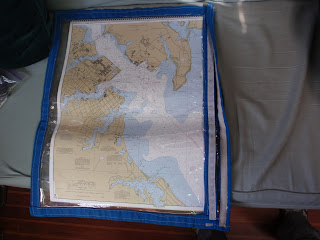 
When we did our first ICW trip, some wonderful mentors held our virtual hands all the way from the time we left Annapolis to the time we anchored at Morgan's Bluff to check into the Bahamas.  They taught us some cool tricks and kept us safe and on track and shared their knowledge ... (and far too many glasses of wine!) The next few trips we traveled alone, totally, blissfully free.  We can never, ever pay them back for the wonderful opportunity for nautical knowledge and personal growth they provided.  Now, though, we can pass it on.

When we head south this autumn we're traveling in loose company with several other boats of ICW first timers.  I'm both honored, and scared, by the responsibility.  I hope we can give them enough skills and confidence that they don't feel a need to remain in eyesight of us at all times like Mama Duck leading the ducklings all the way down to Florida...but there are so very many things to know, above and beyond basic sailing and boat-handling and navigation and weather wisdom and anchoring skills.  Talk about information overload.  Wow.  Where ... HOW ... to start?

We can recommend nautical charts and guidebooks and other resources for the trip.  We can provide a "script" for talking on the marine radio to request openings for the many "drawbridges" they will have to transit:  ("Mudpuddle Bridgetender, Mudpuddle Bridgetender, this is southbound sailing vessel Wind Machine, standing by for your next scheduled opening.")   We can teach them about "ICW slow passes:" (Suppose you're chugging along down the ICW at sailboat speed of about 6 knots and a powerboat that can do 10, 15, or more knots comes up behind you and wants to pass.  If he passes you at full speed, you're going to get one crazy rocking and rolling wake.  But if hail him on the radio and request a slow pass, or he hails you, you slow way down for a few minutes, he can come up behind you and slow way down also, pass you gently then speed back up when he gets in front of you again.)

And how am I gonna remember not only the seamanship stuff, but the non-obvious tiny hints of cruiser-etiquette that will make them popular at the anchorage?  (Tip: When you're going to a cruisers' potluck on shore, bring your own plate and flatware.  Few boats carry dinner service for sixteen, and you may not be in range of a store that sells paper plates for an impromptu get-together.)  (Tip:  At a dinghy dock, tie your dinghy on a long painter so you're not blocking access for latecomers.)   Et cetera.  Et cetera.  Et-freaking-cetera!

And then I remember stories of boats running aground or breaking down or even crashing into bridges, thunderstorms and anchor-dragging.  How to advise them about all of this?  In the ICWs soft mud, these incidents can result in anything from minor delays until the tide rises again, or TowBoat U.S. arrives, to boat damage, but almost never in loss of life except in cases of extreme stupidity.  It could be delay your trip by days, weeks (like our v-drive experience several years ago and even though it felt like forever, I put it into context and realized that I wouldn't be 85 years old and still stuck in that location, one way or another we'd get through), or even months, (like this unfortunate incident which led to Matt and Jessica spending three unplanned months on the hard in St Augustine); and cost a little money or a lot, but it is not likely to be life-and-limb-threateningly dangerous.  So here's the single biggest piece of advice for new cruisers I can give, to quote my friend Beth:

"The secret to my happiness is understanding the difference between an inconvenience and a tragedy."


= = = =
(Visit The Monkey's Fist for other bloggers advice to first-timers, in a new topic available September 13)

And just 'cuz you never know what you don't know, for the rest of September, I will post one random ICW fact or tip or bit of advice per day on Life Afloat's Facebook page.

A Silver Lining (Blast from the Past Picture Essay)

We're heading south in just 3 weeks, hurricane season permitting.  The only ice Dan wants to see this winter is in his drink glass.  But in previous winters, we weren't so lucky, and had to stay here in the Chesapeake for our jobs. Our boat, though, was designed for the tropics, designed to stay cool, not hot.  So we prepared for winter by shrinkwrapping, or in our case just taping heavy-duty translucent plastic painters dropcloths.  To help retain heat inside and minimize condensation, we taped Reflectix (silver bubble wrap) everywhere.  My friend Ellen called the result our "silver lining."  It worked really well!  But this year, I think going south will do an even better job of keeping us warm. 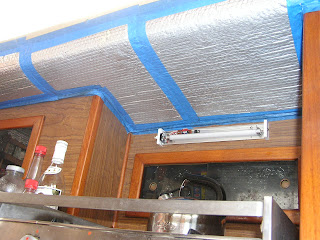 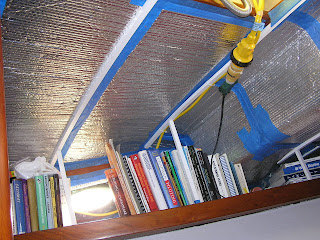 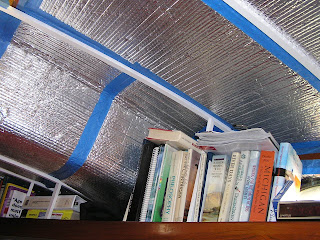 And outside, we built a frame of wood and PVC and draped plastic drop cloth.  We got a wonderful greenhouse effect on sunny days. 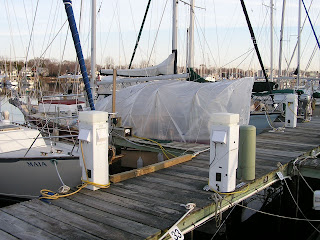 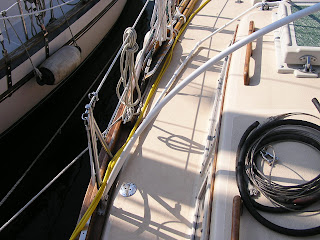 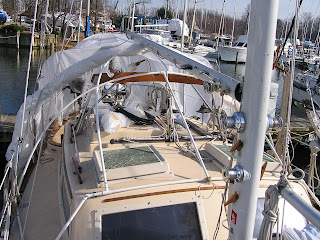