I haven’t written any blog posts in that time because, well, this is supposed to be a sailing blog and we haven’t done any sailing.  We've just been tied to the dock and use the boat like a very small condo that’s prone to mildew.  It’s not quite like land life if we were to live in a small condo, though, because when we meet new people and tell them where we live, the boat gives us a major “cool factor.” There’s something to be said for automatically being interesting.

But the downside of not writing for several months is that playing catch-up on a blog is a horribly overwhelming task.  (Bear with me, I’ll try anyway.) So, what have we been up to?  We've mostly been getting used to life without a car, and occasionally rented a car to explore other parts of Florida and visit friends.  We had several amazing parties including our 30th anniversary celebration, and three glorious weeks’ vacation in Aruba (saving that for a separate post).  But mostly, we have been giving our time/energy/expertise to help create the world we want to live in – exactly what we’d hoped to be able to do once we retired, projects we value without having to worry about where the money comes from.  We’re volunteering at the Castillo de San Marcos national monument; at the visiting historic reproduction ship El Galeon; and with the St AugustineCruisers Net group.

We volunteer at the beautiful old fort Castillo de San Marcos that has defended the town since the late 1600s.  Last time we were here I felt a powerful energy coming from this place that was so well-designed and built (and with a good bit of luck) that it has never fallen in battle.  A couple of days a week we dress like Spanish soldiers from the year 1740 and chat one-on-one with visitors to tell them the fort’s history.  We spend a lot of time on the top deck (the gun deck) where our predecessors would have come in some of their off-duty hours to reflect (probably not to write letters home, as many were illiterate), or on duty to watch for enemy ships coming toward the inlet, or friendly ones bringing supplies.

Most of the questions people ask are pretty predictable -- How far do the cannons shoot? How many soldiers were at the fort?; some seem surprisingly obvious -- Where is the Atlantic Ocean, can you see it from here?  The most common, though, is “can we take a photo with you?” I especially enjoy the way people don’t quite know how to react when they figure out that I’m clearly a girl wearing guys clothing. Most kids are unfazed, and I’ve never figured out whether it’s wonderful that they take it for granted that girls can be soldiers now, or horrible that they don’t realize how recent and hard-earned that freedom is.  So I decided to take advantage of the opportunity to sneak in my own message.  I quickly tell the kids that the only way an adventurous or patriotic woman could serve her country in “my time” was to disguise herself as a guy, that there are plenty of examples of this in history, but of course we only know about the ones who got found out, we never can know how many were never caught.

One day a mom came to visit with her 3 kids, two boys maybe 8 and 12 years old, and the world’s cutest 4-year-old girl.  Mom wanted me to pose for a photo with her family, the boys were awkward, but the girl was scared.  So I told her to forget the picture for now, I’d tell her a story.  The mom started to call the boys over and I said to the girl, no no, just us girls, it’s a secret.  Then I talked about how girls had to disguise themselves, and asked the child not to blow my cover.  All afternoon, as the little girl and her siblings went from room to room and back into the courtyard, she’d peek at me over her shoulder and shyly wave whenever she saw me.  As they left at the end of their visit she looked at me with big eyes and told me that she had seen another soldier upstairs “but don’t worry I didn’t tell him about you.”  The look on her face makes me think she’ll remember this living history lesson for a long time!

When we’re not being Spanish “soldados” we talk maritime history on a visiting ship from Spain, a wonderful replica of a galleon (armed cargo (treasure) carrier 17th century style).  And we get to continue the theme of playing in costume by doing our guiding on that ship while dressed as pirates.  Since pirates seem to have a romantic appeal in our culture right now (maybe because so many of us spend our days sitting in gray cubicles staring at computer screens, being a swashbuckling rogue or rebel has a lot to recommend it) We sometimes get grief from the self-righteous about glorifying pirates who were actually bad guys; my take on this is that I don’t care how we ‘hook’ the kids to get their interest, we’ll meet them where they are.  They can’t learn if they aren’t listening to us, and if a sword and a tricorn is what it takes to get their attention, that’s what we’ll do.  Once we get their attention we can put the pirates in their real historical context, not their Disney context.  And at 180 feet and dominating the skyline, the Galeon is a heck of a platform to catch their attention and deliver our message, when we tell them that the reason the ship has cannons is to defend their treasure from pirates “like us”!  We ask the kids if they want to join the crew and swab the decks and climb the rigging, arrrrgh.  We explain that we like to use kids for the latter because they’re light and agile and … disposable. “If one falls into the sea, no worries, we’ll just pick one up in the next port,” we tell the parents.  Then when they look appropriately horrified, we advise the kids to stay in school and study reading math and geography, because most of the crew back in our time was illiterate, but if they had more education then they could join the crew later as the navigator, a much better job than swabbing the decks, and they get to sleep in this nice cabin instead of a hammock slung between the cannons below on the gun decks. Corny?  Maybe – but what parent is going to complain that some random stranger encouraged their kid to stay in school?

Meanwhile, back in the 21st century, the St Augustine Cruiser’sNet is a group that promotes “safety, communication and community in this old city and surrounding waters” for local and visiting boaters, according to its mission statement.  In our case the “community” part of the mission seems to feature prominently as we've made a lot of friends of fellow boaters here.  We've had far too many beers at far too many happy hours in local restaurants with the group.  Once a month they host a has a happy hour dubbed “Think and Drink” that includes a speaker on some boat-related topic, so it’s not all just parties.  They also run a radio net on VHF every morning at 9 AM.  (For the non-boaters, this is like a giant teleconference where people can get weather and tide information, connect, ask for advice or local services, buy and sell boat-related things, help each other, or generally act like a community.) We volunteered to lead the ‘net every Thursday and some Saturdays, which has given me great VHF practice and visibility. Serendipity: I couldn't have volunteered for this if we hadn't replaced the radio while we were in Oriental NC on the trip south because the old one could neither hear nor broadcast far enough.

We celebrated a low key New Years Eve at the home of friends Tony and Michelle.  Gathered around their fire pit, we had wonderful conversations about "what was your most memorable day of 2013?" and the inevitable "do you have any resolutions for 2014?" (We couldn't narrow it down to one single awesome day in 2013; but our only resolution for this year was not one of the usual diet/excercise/save money variety, it was simply "Have More Adventures.")  Then in contrast to that quiet party, on January 4 we celebrated 30 years of marriage with a wild and rowdy party aboard the Black Raven’s adults-only (somewhat risqué) pirate-themed night cruise.  Several of our wonderful friends came from out of town, and good-naturedly dressed up in pirate costumes to celebrate with us. Much rum was consumed. 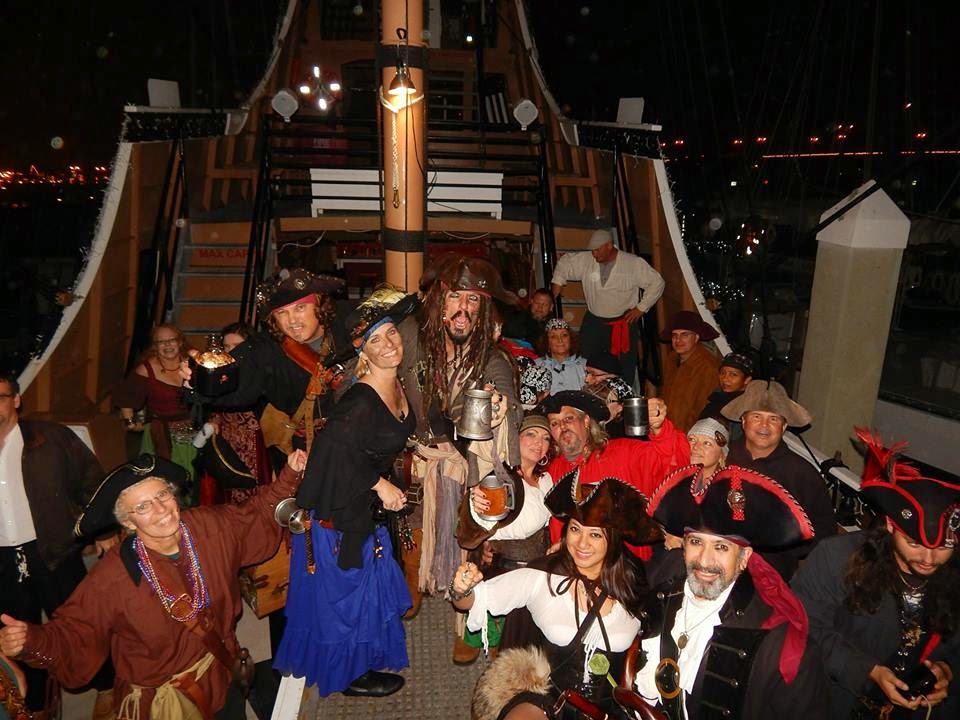 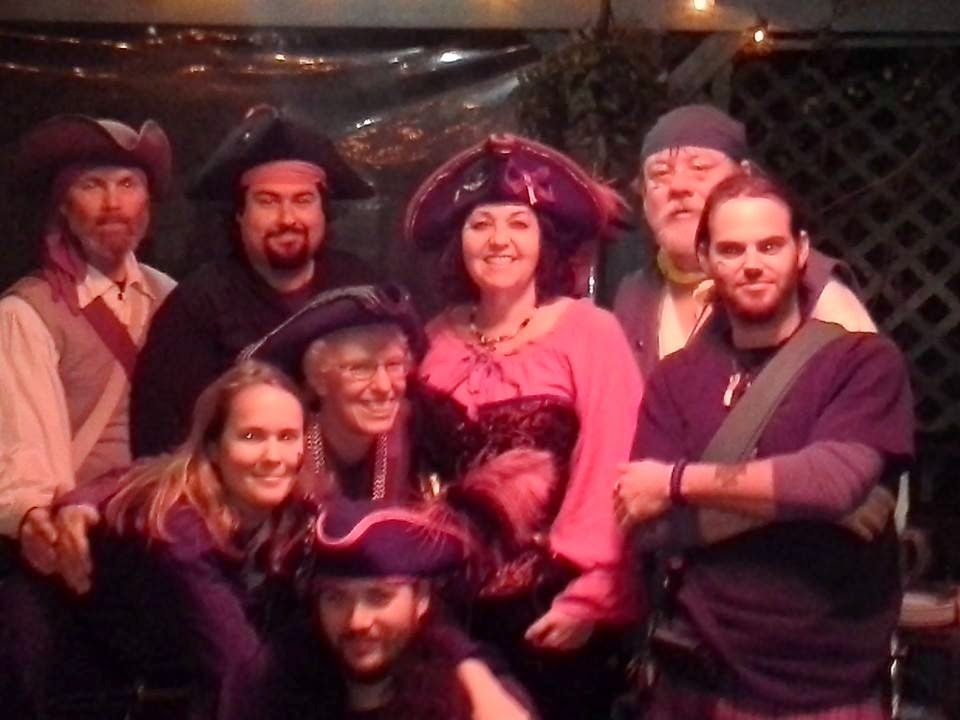 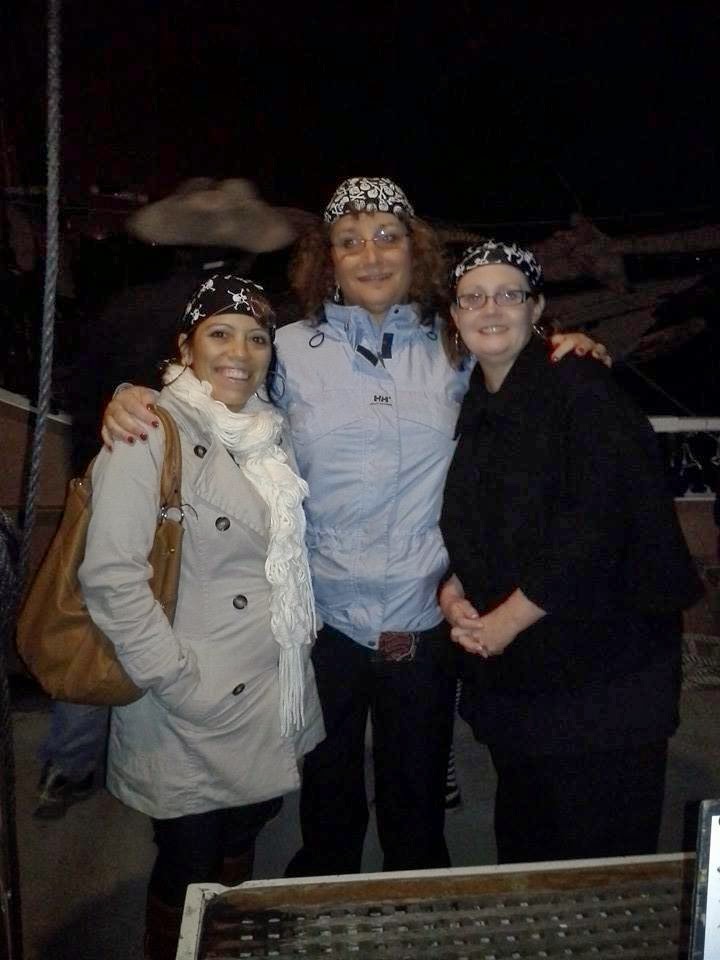 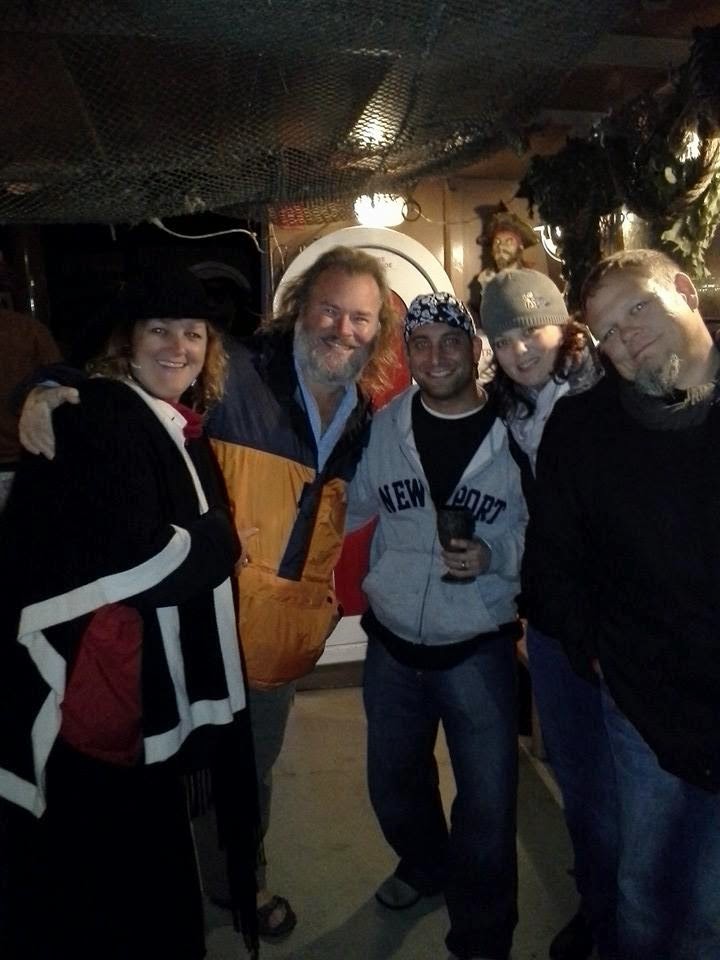 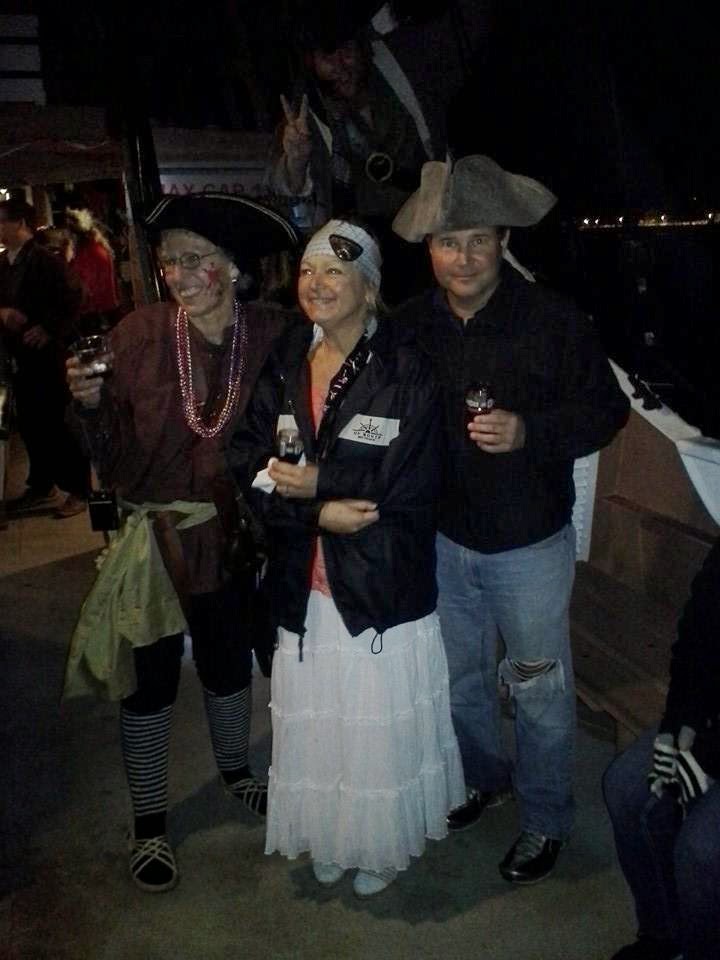 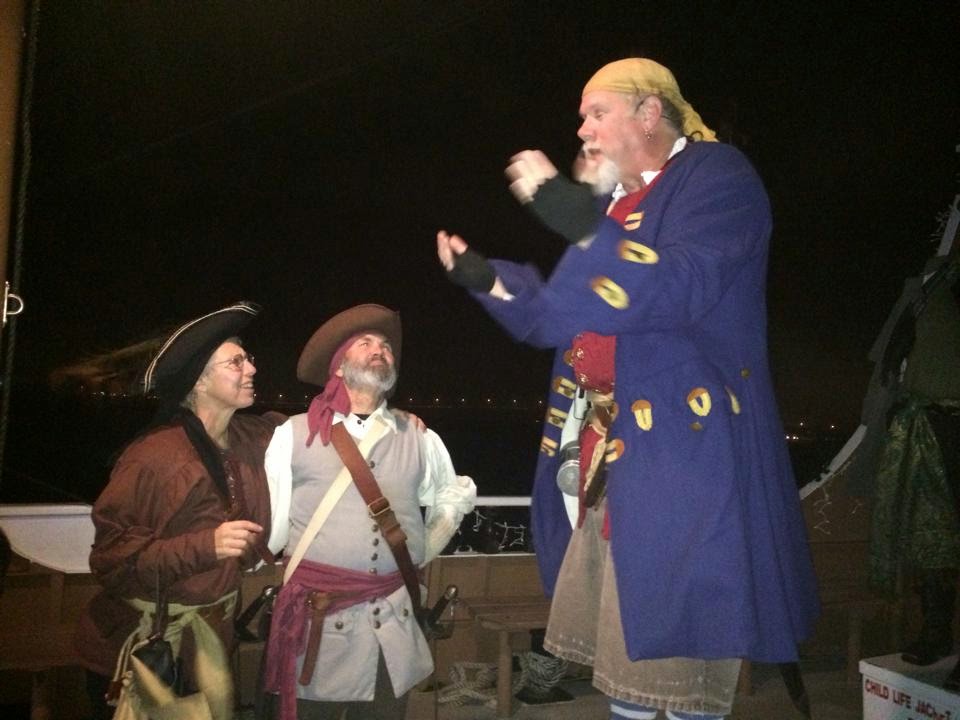 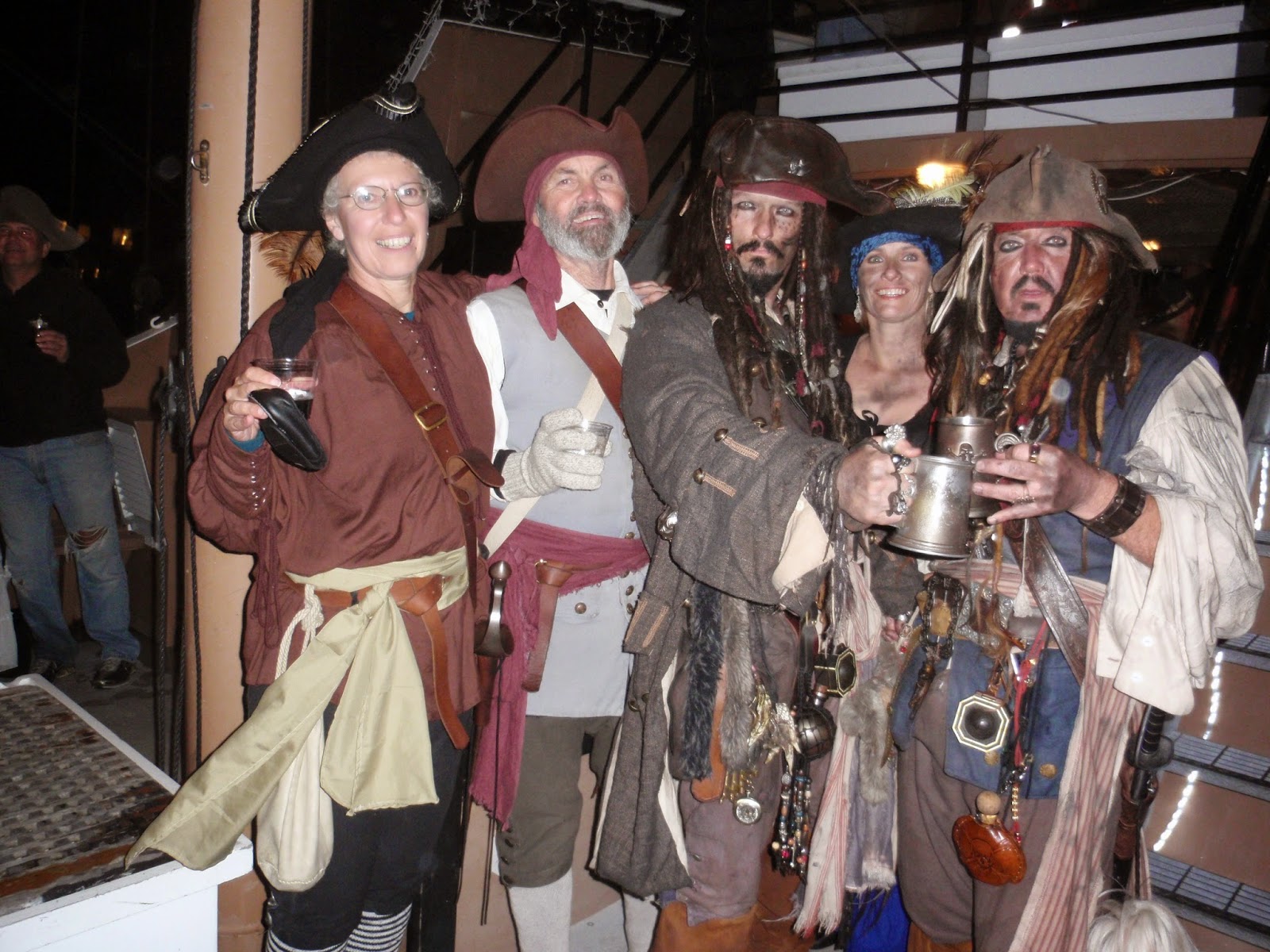 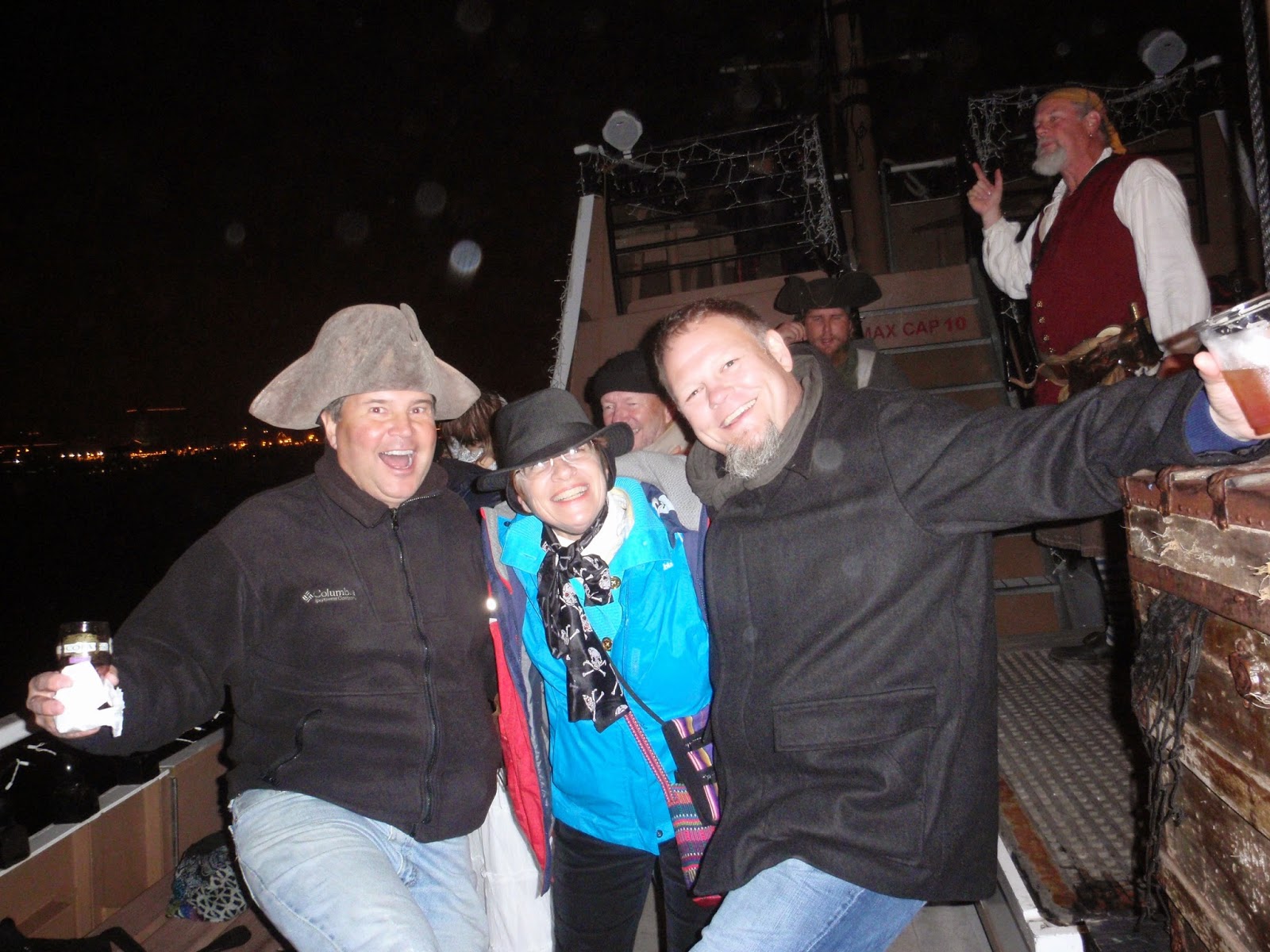 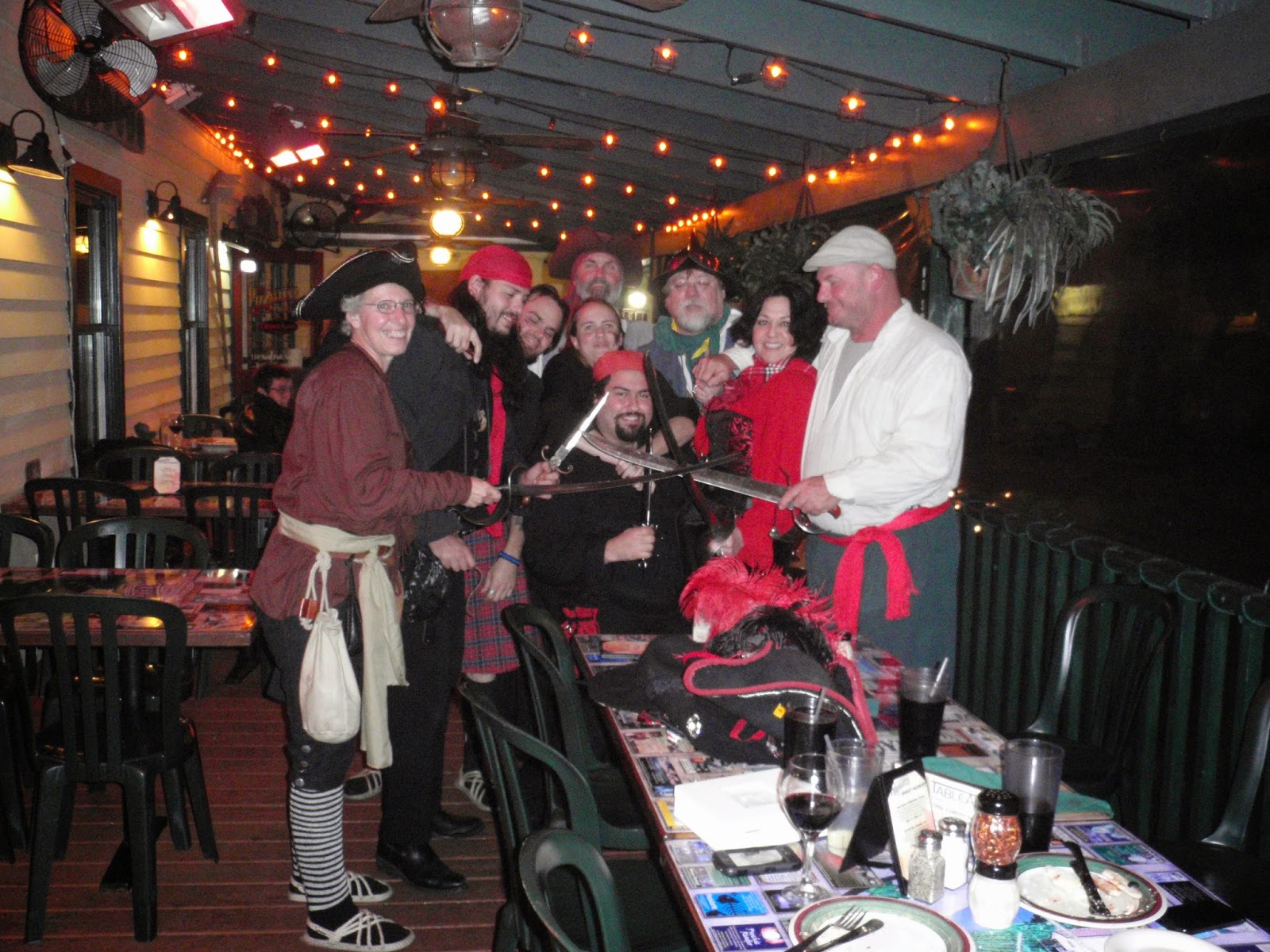 And finally, the winter has been filled with below-normal temperatures, and wild winds and storms that make us think this was the right year to become Florida residents.  Many more memories and mental images but if I don’t stop here this will become even more of an overwhelming post than it is already!  (Who am I kidding?  It's already overwhelming.  But since this blog has become as much of a record for me as a communication method to you, I'll be adding pix and refining this post as I discover more things I want to remember of the winter.  Except the cold.  Don't need to remember the cold.)