Quebec City was a favourite. It really was like visiting Europe, without the bother of an Atlantic crossing. Gaspe and Rimouski both had a French feel, but this city was the real deal. And it was a perfect time of year to be a tourist here. Many of the crew had arranged for their parents to visit them here as well. It brought me up short a couple of times. I was intellectually aware, of course, that we were older than our shipmates, but I'd gotten used to thinking of them as our team and the difference melted away. But now I was meeting their families and being reminded that not only was I older than my crew mates, in many cases I was as old or older than their parents!

Quebec City was a busy stop in many ways. The entire tall ship fleet was reunited here, after they had scattered to various ports around eastern Canada for the previous three weeks. No city was big enough to host everyone at once until now. So there were lots of crowds and lots of events both public and private. There were cobblestone streets and sidewalk cafes, croissants and crepes and wonderful scenery. It was also a city of steep hills perched on the ancient granite. On one day off, my tracker told me we had walked 11 km. What it neglected to measure was that those kilometers were all vertical. Another of those days when we were eager to get back to work because having days off and wanting to cram too many experiences into too few hours was exhausting. 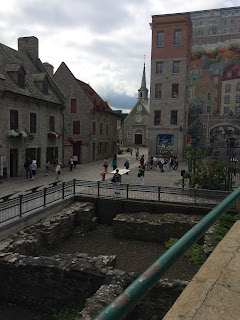 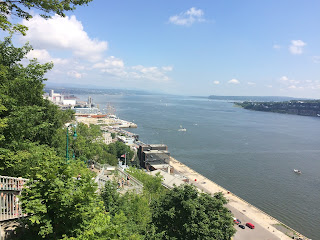 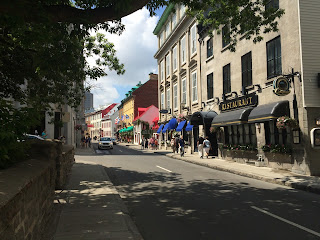 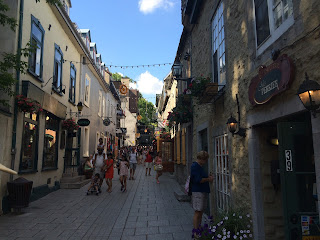 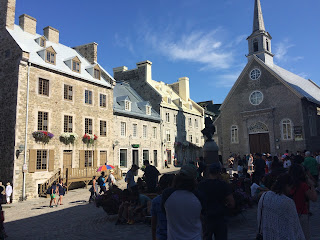 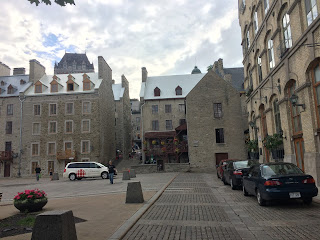 There is no such thing in English as a single shenanigan or hijink -- these things, like pants and scissors, only exist in plural. ("Travesuras" in Spanish) We are generally a work-hard-play-hard crew. 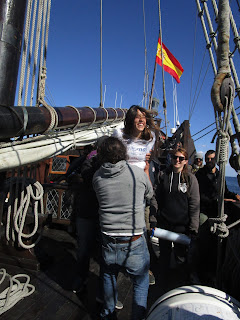 I've written before about the symbolic importance of lighthouses to sailors. Really, though, I just like to be up high and see the view. 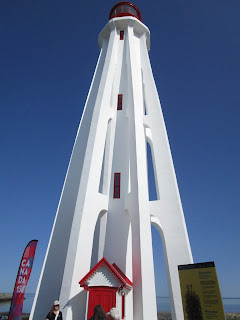 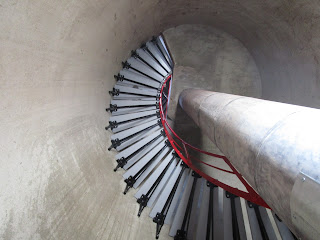 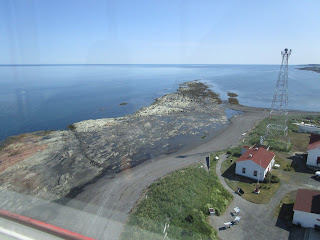 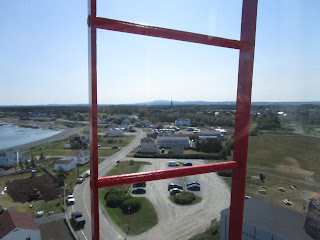 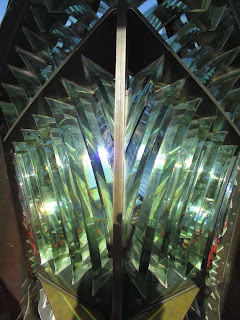 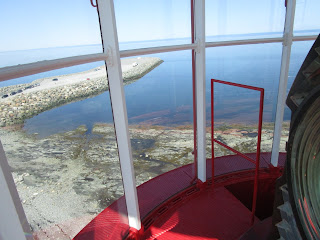 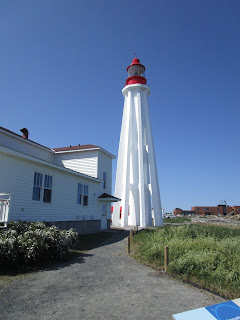 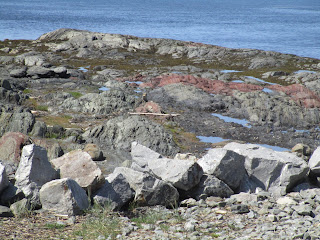 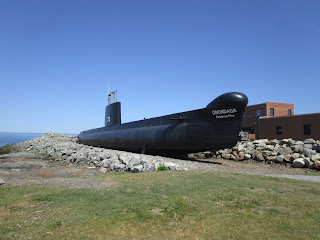 
I had some trepidation as we got underway from Pictou -- our next 3 ports were going to be in French-speaking Quebec. What good is a tour guide who can't speak your language to tell you what you're seeing? And I speak exactly zero French. I find all those silent letters intimidating (as I do with any word I learned while reading and don't want to use in conversation out of concern that I'll mispronounce it). I find the accent lovely to listen to, fluid and melodic, but again, intimidating and impossible to duplicate.

Trying to be prepared, I made myself a list of the most commonly asked questions aboard -- things like when the ship was built, how many crew, and where we are going next.  Then I had a serious session with Google Translate and headphones to translate the answers into French. The questions, too, so I could recognize what was being asked, and then I wrote a phonetic shortcut to memorize what to say in response. And what I feared would become my most-used phrase: "Sorry, I don't speak French. Do you speak English or Spanish?"

My first day in our first French-speaking port, Gaspe, turned out to be a day off, and I quickly found the local bar.  "Beer" and "biere" sound about the same, BTW. A helpful bilingual waitress double-checked my translation. I'm not sure whether the tasty beer, the lovely setting, or her confirmation that I was saying what I intended was the most reassuring, but anyway I had a lovely afternoon. She also echoed what my French-speaking friends Margo and Karen had already told me: as long as you give it even half a try, people will be welcoming. And likely each group will have at least one person who speaks some English and can translate for the rest.

And that was indeed the way it happened. People were delightful, warm, and interested.  (Why is it that French Canadians have such a terrible -- and sadly sometimes deserved -- reputation for rudeness, arrogance, and bad seamanship on the ICW, and yet were so gracious and welcoming when we visited their province?) I learned to swallow my "r" when I said "bonjour" or "bienvenue a bord" even though it hurt my throat by the end of the day. I also learned to count to three because so many people asked me to take their photo. I learned to speak slowly so one member of a group could translate for the others. When that failed, a lot of sign language was involved, Gestures, and laughter. People wanted to connect with us, wanted to understand, and made it happen. And really, in their questions and interests they were more similar than different to people we'd met throughout the U.S. Makes sense, of course, if you give it half a thought. We are both nations of immigrants.


On our first short walk exploring this tiny town we saw banners on all the streets with names like MacDonald, Sutherland, Douglas, Cameron. One of our crew perks was free admission to the local history museum, and since I love learning the stories that towns tell about themselves, that was the focus of our day off.  (Well, that and the bar...)


The town was settled in the 1770s by the Dutch ship Hector, about half our size but carrying 189 emigrants from the Scottish Highlands after a tough 3-month voyage. The ship was past its prime and better suited for carrying cargo on coastal runs than passengers across the North Atlantic. They were within sight of land on this continent when a strong gale blew them back to sea, costing 2 weeks they couldn't afford. They finally landed in September with insufficient time to prepare for winter. I hadn't realized how desperately poor they were, suffering the double whammy of tough farming conditions at home (short season, bad soil, transitioning from cattle which used land densely and employed many to sheep which had lower profit per head) and in addition what profits they could make were skimmed by a (corrupt) land management system and middle men. The theme was similar to the stories we told of the Spanish settlers on the galleons 2 centuries earlier, though different in the exact details and context. A difficult, dangerous voyage that people willingly undertook -- because that risk was better for their families than staying in Europe would be. Lots of detail about the history of the voyage and the settlement is here. One of my favourite stories about the trip was the story of the bagpiper who couldn't afford to pay his passage; the other emigrants said they would share their rations with him if he would play the songs of home to keep their spirits up on the long voyage. (They did, and he did.) Another story tells how, early in the voyage, people would throw away the "biscuit" (a bread similar to hard tack) that had gone moldy. One frugal gentleman kept these castoffs; and after the ship was blown off course by the storm, was able to help the nearly starving passengers by offering these old crusts back again.

Once I understood the background it didn't take all that long for me to translate "Nova Scotia" to "New Scotland." I saw the heritage everywhere -- in the glorious red hair of the children who came to visit the ship, and the pipes and drums that greeted us. 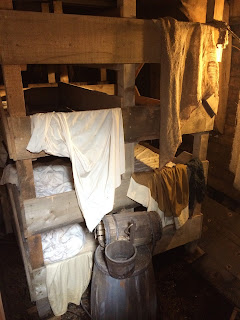 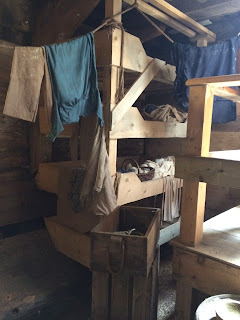