I had a bit of an unfair advantage in that challenge. After all, on the Galeon I live in a target-rich environment. There's almost nowhere you can point a camera and not have an option for a unique picture. The black and white got me thinking about the details and textures of the things in my life, and I'm really glad to have had the motivation to see my world through a different lens (no pun intended), as black and white is all about detail and silhouette and texture.  At the same time, I'm more of a writer than a photographer, and the restriction against explanations really chafed! So I'm republishing the photos here, this time with captions.

Not the Downsizing Post I Thought I Was Going To Write

Can you stand one more post from me about downsizing, minimalism, and a surfeit of possessions? Because I really need to process this.

A friend's brother had died unexpectedly last summer while we were touring with the Galeon and she was left to clean his apartment and put it on the market for sale. He had lived just a few hours drive from us so we went over to help. The brother had been an extreme hoarder and even  though friend and her husband and son had already spent weeks working on cleaning the place before we arrived, it was still crammed with possessions. I mean, extreme television-show-hoarders/shopping-addicts level of crammed.

The things someone chooses to surround themselves with always give a window into the person. Some of the sad possessions were aspirational -- a fruit juicer and cookbook, still in its packaging, may have hinted at hopes of healthier eating. There was an extensive collection of NASCAR memorabilia, and lots of creature comforts for car camping, obviously a hobby he enjoyed. There were far too many televisions a single person in a two-bedroom apartment. And there were some things that made no sense -- two space heaters and a humidifier, in south Florida?

His life, full of possessions, was exactly the opposite end of the spectrum from our necessarily sparse one.  Maximum to minimum. A quiet, perhaps somewhat sad and lonely, homebody surrounded by his "stuff," rarely traveling further than the couple hours' drive to Daytona for the races; and my crazy-busy tumbleweed life, crammed with adventures and friends and travel but almost no "stuff" by modern American standards. In fact, we joke that we can always recognize former cruisers, even when they move back on land, because their apartments or houses are always sparsely furnished, mostly with new furnishings, because they sold everything and don't have the accumulated clutter of a lifetime that people of that age would normally have.

It's become a truism in the liveaboard community that first you have to get rid of all your possessions in order to move onto a boat. Almost every boat blogger I know has written on the topic, the weird relationship we have to our "things," and how they can weigh you down. I know I have been one of those writers, racking up a total of 15 posts on one aspect or another, tagged "organizing/downsizing." And I thought that the process of helping clean up my friend's brother's apartment was going to be another example of the same thing, decrying the impulse to acquire that is, in fact, built into us by our evolution; in prehistoric times it would have been an advantage. Obviously, in the case of hoarding that impulse has run amok, though that doesn't necessarily mean that acquiring, itself, is always an unmitigated evil.

But that's not the direction the story went. We gathered all the NASCAR memorabilia and consigned it with a collectibles store in Daytona. We commented on the irony that it was entirely possible, given the location, that he had first purchased some of these items from this same store, and they were coming full circle -- ah, the waste of materialism.  But maybe, maybe not. Getting rid of possessions and living a life of freedom on a boat or RV or housesitting or traveling is one way to have a good life, but certainly not the only way. There is nothing wrong with hanging out at home and surrounding yourself with things that make you comfortable, or are useful, or that spark happy memories or that you think beautiful. It's just another way to make a life that works. Different, but no less valid. Would it be ironic if this collection had gone full circle? Yes, ironic, but that does necessarily make the collecting itself necessarily futile. On their circular journey, these things stopped along the way, to make someone happy.
Posted by Dan N Jaye at 18:53 No comments:

As we traveled port to port in Canada, we offered the opportunity for people to buy passage with us, as trainees or as simple passengers. I was initially somewhat skeptical of the idea, though of course the extra income for the Foundation was welcome. I was concerned that although they seemed to be pleasant enough people, we didn't show them the best time.

We got off to a bad start (literally) when we had trouble with engine oil pressure and had to return to the dock overnight on our departure, while the engineers worked deep into the night. Next morning we made a weirdly slow exit from the dock, just to make sure everything was okay (it was). We deployed the sails, but a block burst spectacularly while we were hoisting the mizzen sail. I learned a few new Spanish words: "chapuza" kind of a half-assed fix or lazy jury-rig; and "gafe," or jinx.

I coached those who wished to learn to steer, and other crew took our more athletic trainees for a climb up the rigging.  All with photos for their social media, of course. Conversations aboard became trilingual. You could hear "good morning," "buenas dias," and "bonjour" in the galley every morning. Still, it was hard to remember all the little things they needed to know to fit in. I remember coming on watch one evening and discovered the trainees had commandeered both sets of binoculars for whale watching, leaving nothing on the bridge for, you know, actually using to identify other ships or potential obstacles near us. Not really their fault; no one had remembered to tell them that the binoculars were not allowed to be taken off the bridge.

One enthusiastic guest convinced Captain Pablo to steer close to shore as we passed her tiny hometown in the dusk so her family could see the ship. (I had visions of a Costa Concordia-style disaster  (the Italian cruise ship that ran aground and sank when its captain showed off by sailing too close to shore) but no worries, our Captain Pablo was better than that. And the guest also wanted to ring the ship's bell as we passed, which of course would wake the poor off watch if she rang it loud enough to be heard on shore. I was frustrated -- somehow the whole cruise felt like we needed a bit of adult supervision.

But Captain Pablo said to cut her some slack, this was a once-in-a-lifetime experience for her, growing up in the tiny fogbound coastal town. And we later saw, with the care she spent collecting memories of her short time with us, that he was right -- even to her begging signatures from the entire crew on her souvenir (book? t-shirt? I don't remember nor was it important.) My resentment lessened as I told Pablo he was right -- our life aboard this ship is really extraordinary. The things we take for granted are unique -- we are the only Spanish galleon sailing the seas today -- and sometimes it takes the fresh eyes of our visitors to remind us how incredibly lucky we are to be here. 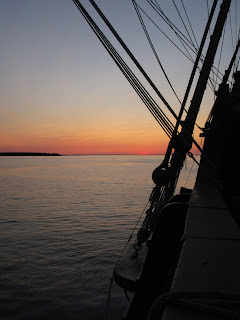 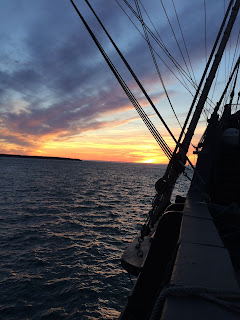 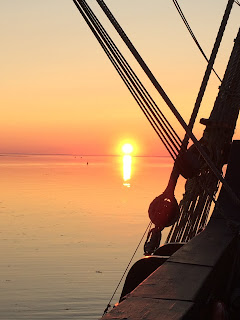