Hey There Colorado! (You Both Can, and Can't, Go Home Again)


Exactly one year ago we went back to Colorado for a short visit, the first time we've been "home" this century. For so long after college, my best friends worked in New York and Philly and longed to live in Colorado as we did. They held that dream, it would be so cool to live near each other again, and finally after retirement they were able to move west ... though we had so sadly moved away, back to the East Coast and the boat. So it was phenomenal to go back for a visit to see them in their new digs. They indulged us with a tour down memory lane.

I expected the visit to be weird and disorienting ... and it was. After all, we're different people than the people we were when we lived there - older, weaker, slower, and we hope wiser. And the place itself is different too - more developed, more crowded, maybe less wild.  So in that sense we couldn't go home again because "home" didn't exist. But the mountains - the thing that drew us to Colorado from the beginning - the mountains were wild and steady and reliable and unchanging. Draped over them was this grid of human development trying to tame and flatten them.

The days before we left were a mad scramble, as we prepared Cinderella for storage and ourselves for a summer of adventures. All of our possessions, save for one backpack and one duffel bag each, were removed from the boat and boxed in storage. Somehow in the chaos I'd managed to pack the camera to bring along on the trip, but lost the charge cable. Typical -- I've never yet had "enough" time to organize things properly for a move, so books, spices, and tools all shared a packing box, one of 46 (!!) filling every last available cubic inch of our storage unit. A pair of earrings and a flashlight were misplaced, and a laundry bag we hadn't seen for years came to light.

We needed to turn in our rental car by midnight (like Cinderella!) and be at the airport by 4 AM. We really couldn't talk ourselves into paying $100 for a motel room we could only use for half the night, so we planned to just cat nap in the airport lounge until check-in. Which meant that we were technically homeless for one night. We spent the afternoon hanging out in the public library, one of very few places in the city other than work or home where people are free to hang out without the expectation of buying something. We were not hungry and didn't want to get drunk, so that ruled out restaurants and brew pubs, we aren't movie people, and didn't want to go shopping.  When you think of it, there just aren't that many options. We did in fact cat nap at the airport, along with a surprising number of other people, until time for our flight.

Our friends met us at the airport and all tiredness was forgotten as we caught each other up on our news, and we eagerly looked out the car windows at all the changes Denver had shown after 20 years away.


We visited our old home town of Boulder. It both was, and wasn't, the place we remembered. Could we visualize living here again someday? The rocks haven't changed, lots of new development so the human landscape has changed quite a bit. Most of all, we've changed. Some of the nostalgia I feel isn't really about the place, as much as its about who we were when we lived in this place -- younger, stronger, broke-er, dumber. And our futures stretched before us, wide and green and forever. All in all though, if losing that optimism is the price to be paid for gaining amazing experiences, long durable friendships, and some wisdom, patience, and empathy... I'll take aging, creaky body and all. I still have love, health, money, and time enough to enjoy them, yay retirement!


Thirty-odd years ago, we helped some friends build an Indian restaurant. We have so many stories from that time. No money, but Dan came home from work every night with fabulous curry; we didn't cook at home for months. Every time one of the staff went home to India on vacation they came home with artwork to decorate the new restaurant, or specialized cookware, or whatever. They weren't allowed to store any food on premises until the health department okayed the site, so we kept the spices in our guest room, including a 50-pound (!!) bag of cinnamon. (Can you even imagine how delicious our house smelled?) I remember the executive chef sitting on the floor during construction, shaping an asphalt floor tile holding it and the knife in exactly the same pose as he would peel a potato (and looking just as comfortable). We went to the restaurant's new location; they have moved twice since then but still have behind the bar, the framed dollar bill we gave them for luck when they first opened. We still have aboard Cinderella (part of) the thali set they gave us - we use the small dishes for snacks and nuts when we host happy hour or for mise-en-place, though the engraving on them has been worn smooth. (The rest of the set is not gone, just too big for the sailboat, is in storage with our other treasures, for "someday" when we move back to land.) Still the BEST Indian food in Denver! The owner's son, now a charming 30-something and working at the restaurant also, mentioned a funny memory he had as a 7-year-old, pulling out one of our measuring tapes to see how far it could go, and then not being able to get it back into its case. How remarkable that that stuck in his head, so many years later.

In addition to the fellow college alumni, we had two other sets of longtime friends in the area. We would much have preferred to get with them one-on-one but there just weren't enough hours in the day, so we all got together in a trendy microbrewery in south Denver. The shortest of these friendships, is still over 25 years. 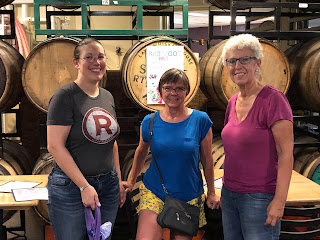 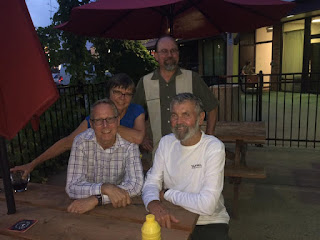 On our way to drop us at the airport, our friends took us to visit our old workplace, Rocky Mountain Arsenal.  Chemical weapons were built there during WWII, Dan worked there in the 1970s after returning from Korea, while it was an active installation; Jaye worked there in the 1990s as part of the environmental cleanup after the place was decommissioned. (Probably my favourite job of my entire career.) All the buildings are gone now, their frantic and desperate history preserved only in a few educational plaques scattered around the site, and the buffalo literally roam. Of course, turning a Superfund site into a park is the definition of success; and it's the nature of environmental cleanup that it's a good thing if you make your job unnecessary. But still, when I worked there I would sometimes drive through the old plant area, the pipes and tubing and enigmatic buildings, and feel like I could almost, almost sense the camaraderie and shared sacrifice and archetypical American pluckiness of the workers there then, and leaving every evening, driving past the billboards that said "Thanks for the help!" on my way out the gate and I'd always smile a little internal, "No problem! You are welcome any time!" and wonder how modern visitors such as our hosts could ever understand the scope of what had happened here.

All in all, an awesome visit, over way too fast. We promised to return for a longer time next year (this year, hah!) which of course can't happen now. So instead, it's just a lovely thing to look forward to, some future year.
Posted by Dan N Jaye at 19:36 No comments: