First off, we are okay. Cinderella is okay. That's the perspective. The details and the scramble in between were incredibly stressful ... and we didn't lose anything! The only real damages were to our wallets and sleep cycles, yet the stress was intense.  I Just. Cannot. Imagine. what it must be like for friends who lost homes, boats, and businesses to this hurricane storm, or to hurricane Maria that followed.

The initial storm track and size looked serious enough for us to want Cinderella on the hard. Such peace of mind to have paid to reserve our spot at the beginning of the season. One boatyard here in town when we arrived 4 years ago has a "hurricane club." For $250, you are guaranteed space to haul out if there is a named storm. If there are no storms, you wasted some money. This had been the case for us the last 3 years, but this year, we were getting mega value for that guarantee.  Our insurance company was very, very happy.

Except when we called to arrange the haul, the less-than-helpful owner told us that he couldn't haul any boats because his travel lift was broken.  What dreadful timing! And of course because we had the guarantee, we hadn't made any backup arrangements and now everyone in town was full. Plan B was a protected marina 2 days travel away, that had one remaining slip. We'd have to get moving.

After a sleepless night filled with visions of charts and tides, the co-owner called and said that the problems with the lift were fixed and we scheduled our haul after all. Giant sigh of relief! Turned out that when they had done previously-scheduled maintenance on the travel lift, the mechanic had put back the controls in a new and unfamiliar pattern. The operator, the grumpy guy I had first talked to, was absolutely unwilling to learn a new system when he had many many boats to move quickly in the days before the storm, and rightly so. He had scheduled his work assuming he would be able to handle the lift nearly on autopilot as he had done with that particular system for many years. But now the mechanic came back and reorganized it the way it had been and the boatyard, and we, were back in business.

After Cindy was secured, we evacuated with a few things to a motel about 5 miles inland. It was at the same location as the county's emergency services operation was set up, so we figured it was a safe spot.  After all, if it was good enough for them...  There was a mini-fridge and microwave in the room, and we brought our electric induction single burner cooktop and some pans and food, and we were ready for whatever the weather would bring (we thought). We were even happily planning some internet time. Our air conditioning on the boat had no been working so we were looking forward to sleeping cool and dry.  I brought a bottle of maple syrup also because there was an ihop restaurant attached to the motel.  There were also two raunchy "sex toy shops" directly across the street, but we didn't know that at the time we made the reservations!

Things went comfortably until 5 AM during the height of the storm, when there was a pounding on our motel door.  Earlier I had dimly heard thumps and running feet, heard someone yell to shut off the power, "Yes, the entire building." Turned out we were being evacuated from our evacuation because the roof had blown off the motel! If we hadn't had a rental car we would have been totally SOL, but since we did, we loaded our possessions into it and after the wind quieted later in the day, we drove to another motel. Of course since everyone everywhere had evacuated, the only motel we could find was one that had no power itself -- but that was better than one with no roof.  We settled in with our lanterns and paper books and had a dinner of leftover cold foods.

The storm had taken its toll. We were glad we had hauled out, although the motel stay and car rental ruined the progress we had been making on paying off old debt. Could have been so, so much worse. While the boat was out of the water anyway we serviced the seacocks, painted the prop and replaced the zincs, all necessary maintenance.  And discovered a few things we hadn't been aware of that needed attention. The boatyard was a depressing place that Dan nicknamed "Boatyard of Lost Dreams." There were many forlorn boats that would clearly never see saltwater again. One had been converted into some sort of standing shack, the props and drives removed and the holes fiberglassed in.  The people living on these "shack hulls" were not malicious, just directionless, jobless, and frequently drunk.  Some were theoretically working on their boats, the others didn't even pretend. And there were cockroaches everywhere.  With our through hulls taken out and soaking in buckets of vinegar there was nothing stopping them from coming aboard.  Still, we were safe and undamaged! We could deal with the insects, and the colorful characters who were our temporary neighbors.  Still we were delighted when the jobs were done and, with the weather benign again we "splashed" the boat back into the water. Nowhere to go, though, with the marina destroyed.  Fortunately it is a pleasant weather season in this part of Florida, because we'll be living at anchor for a while.

One Crazy Day in Boston

Boston was the first stop on the boat show festival circuit for the summer.  I counted 51 participating ships on the official website (which also has some lovely photos of the event in their banner); even if not all of the ships made it there were still plenty of ships and crowded docks.  Our ship was so popular that our jobs were more traffic control than tourguide; we never really had opportunities to chat with the visitors so no good stories there.

The crowds were intense and we were busy on our working days, so when we had our day off we made the most of it.  FOMO (jokingly referred to as "fear of missing out" inspired by social media pressure) is real, and I'm quite susceptible to it. We ended up having a day off so active, we couldn't wait to get back to work to "rest!" 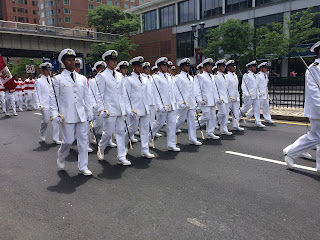 El Galeon in Baltimore -- Not the Summer I Expected


After our long winterlude in the Keys, we anticipated a quiet, lazy summer back in St Augustine. A trip to Annapolis to see friends, family, and do what we call our "medical monitoring marathon;" possibly the annual Aruba trip that we usually take in February but had delayed this year because we were already in a warm interesting place; and in general just enjoying the simple pleasures of home and friends and a slower pace. But that wasn't the way it turned out.

Instead, we had another chance to crew on the Galeon for the summer as they toured eastern Canada. Dan was all for it from the start, I was a bit more reluctant. I remembered the crew and the ship fondly, and was curious about the ports on the schedule, and any opportunity to get out of Florida's summertime heat and humidity was welcome, but most of all I remembered that those tall ship adventures weren't free. I loved both the sailing and the opportunity to use the ship in port as a platform for fascinating conversations with visitors, but the hours were often long and we gave up control of our own schedules. I often described crewing on the Galeon as a lot of work and a lot of fun all in the same package, and to be honest, this retired girl wasn't looking forward to the work part!

Still, it wasn't all that hard for Dan to convince me (and truth be told, for me to convince myself) that the opportunities far outweighed the effort. We spent the month of April promptly sailing Cinderella back to our home marina in St Augustine, then about 3 weeks dealing with logistics, packing, and readying the boat to be left alone for 3 months, and before the end of May found ourselves in a rental car headed north to meet up with the ship in Baltimore. (Pro tip: we got lucky with the car rental. Hertz needed cars moved north for the summer. They charged us a fantastic $10/day, unlimited mileage, and no one-way drop off fee -- as long as we promised to drop the car outside of the state of Florida. Yeah, we can do that!)

We arrived in Baltimore shortly before the ship was due to dock at 10 pm. This was the first time ever we participated in docking the ship from the shore -- usually we were aboard when docking -- and were interested to add this view to our repertoire. We were with ship's agent Bosco, who was much better than us at spotting the dark silhouette against the confusing lights of the Inner Harbor, but once it was pointed out to us we happily anticipated our reunions with the crew we'd met before, and the chance to meet the new members, and to enjoy the beauty of the ship itself.

Once aboard, we quickly fell into the familiar rhythms: up at 08:00 or earlier for breakfast, dressed and ready to work by 08:30, ship maintenace or cleaning chores until we opened for the public at 10:00, chatting with visitors all day, with breaks around 1:30 pm for lunch and a hour or so mid to late afternoon for siesta (which we often spent exploring the ship's immediate surroundings) , then working again until close. After we closed to visitors around 7:00 pm, there were more light tasks like topping up the water tank and shutting down the video projectors, and we basically chilled out until dinner around 8 or 8:30. After dinner we'd share a quiet beer or rum and conversation on the foredeck and watch the city lights, till finally tired but happy we'd head to our bunks for the night. And next day, do it again.

A few pictures, with stories, of our time in Baltimore: