I always thought of Steve and Michele as the couple down the dock with the little powerboat and big dog. But this season they traded in the powerboat for a brand-new 40-something foot Jenneau sailboat, and now they’re spending every weekend aboard in Annapolis, and loving it. Suddenly, living aboard became a real possibility for them. There are a lot of things that could be obstacles, such as whether the move would make their commutes impossible, or simply dreadful; and aging parents; and the state of the real estate market. Other than showing them my super secret-agent route across the District, that avoids some of the traffic congestion, some of the time, I can’t help with most of their challenges. But one concern that Michele voiced, “What do you do about your stuff?” – that, we could talk about. Food for thought for some land-based downsizers, as well.
Moving from a house to a boat is a huge attitude adjustment. Can you say, “storage space?” Of course, none of your furniture comes with you, tables and seating are built in. But what about the rest? For scale, think about what you would chose to bring if everything – every. single. thing. – you contemplated bringing had to fit in the kitchen cabinets of your land-based house or apartment. That’s all the space you have, and in that space you need to find homes for not just pots and pans and dishes and food, but also all your clothing and your backpack and your toolbox and your books and the spare sheets for the guest bed and … you get the idea. When we were first thinking of moving aboard I asked my friend Linda Glaser how to prioritize and she said, “First, all your safety stuff. Then, your tools. Then, everything else.” That was almost 10 years ago and I still chant that like a mantra. It’s a sobering reflection on the difference between things you need, and things you want.
I hope I didn’t scare Michele – I haven’t seen her around the docks in the last week or so. But regardless, given the current economy, I know a lot of people who are reconsidering their relationship with their possessions – even the ones who aren’t toying with the idea of moving onto a sailboat.
Posted by Dan N Jaye at 16:59 No comments:

One day our neighbor Charlee found that the wind-sensing instruments at the top of her mast weren't working. She considered trying to enlist the help of a passing seagull to fly to the top and assist ... um, with the expected result ... or lack of one. Instead, she asked if we would help her get up the mast on Saturday.
She got into her bosun's chair, a canvas sling that is a cross between child's swing and a mountain-climbing harness, and the standard equipment for sailors needing to go up the mast to make repairs. We attached two lines to her. Dan took the main halyard (strong, non-stretchy rope line that is normally used for raising the mainsail), and I held a completely separate second halyard for safety in the unlikely event that the first one broke. Using the winches usually used for raising the sail, up she (slowly) went. Our calling back and forth to each other didn't go unheard, and fellow liveaboard Cathy G. snapped this photo of the process from the next dock. 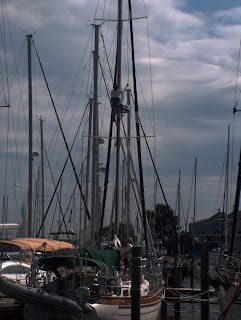 The trip is not for the faint of heart! Her mast is almost as tall as a 6-story building and she was at the top. Luckily we picked a calm day, because any swaying would be magnified as she was at the end of the pendulum. The job went quickly and before she knew it we were bringing her back down. If you don't mind heights, going up the mast can be a fun experience; here's the view she had of the mouth of Back Creek. 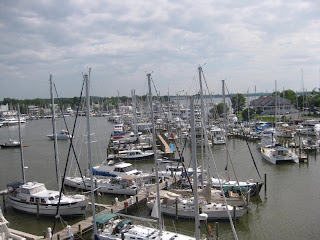 One of the joys of being in an outside slip in our marina is that we can sit in the cockpit and watch the parade of boats going up and down the creek. On a beautiful holiday weekend like this one there's a steady line of everything from kayaks and sailing dinghies to big gleaming cruisers to the graceful charter schooners the Woodwind and Woodwind II. Early this morning we watched a medium size sailboat that seemed to be floundering around in circles, finally we realized they had a skipper on board, were probably relatively new, and were practicing docking to get the feel of their boat (good for them!). I'm intrigued with the range of names, some very self-important, and some more light-hearted. There were a whole batch of puns, such as "Fanta-sea" and "Seas the Day" and "Sea-duction."
I was particularly taken by one group of names. You can just imagine these are designed to allow a secretary to tell the literal truth when fielding calls for a boss who's playing hooky from the office. There are two different sailboats here called "A Sales Call" (Sails Call). Can't you just hear it? "I'm sorry, Dr Jones can't come to the phone right now, he's on A Sales Call, I'm expecting him back late this afternoon." There must be a lot of truth-telling secretaries and receptionists here, because in the same vein, I've also seen boats named "The Other Line" (with a picture of a telephone as their logo), "In Surgery," "Field Office," and my new favorite, "O-fish-ial Business."
Posted by Dan N Jaye at 16:34 No comments:

That’s boatspeak for “back into the water” and far more comfortable than being “on the hard” as were for the last week and a half. The marina drove a kind of motorized frame over our boat and lifted it in a pair of giant webbing slings. Then they drove to a special slip designed for the purpose, and lowered us back into the water. 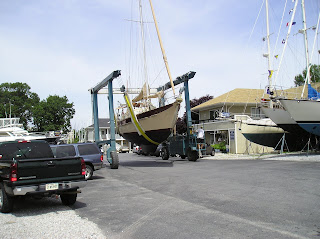 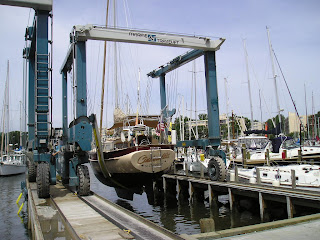 While we were hanging in the slings we asked them what the boat weighed – 21,000 pounds. Interesting, when we first bought the boat and had it moved by truck from Texas to Michigan, the driver told us – and charged us – for 17,000 pounds. So where did the extra 4,000 pounds come from? Part of it was fuel and water, the tanks were completely empty for the drive, but full last week. 120 gallons of water weighs about 1,000 pounds, and 50-odd gallons of diesel, another 350 pounds. And there’s some new equipment that we added, an autopilot and a windlass and 2 large anchors and 100 feet of anchor chain. All told, maybe another 500 or 600 pounds. Still, there’s 2000 pounds of additional weight unaccounted for. The only thing left is our personal possessions. That means that despite all our talk of simplifying and downsizing, after living aboard for seven years … we still have A TON OF STUFF!!! Literally!!!
Posted by Dan N Jaye at 16:23 No comments:

I half-remember a children's story about a little girl who lived high in the mountains, and for whatever reason, she relocated to the city. Poignantly, the first few nights when she heard the unfamiliar sound of cars passing in the distance, she assumed the sound was wind in the pine trees - the thing she was familiar with.
Here on the hard, every time I hear a car pass, I interpret it to be a dinghy passing our stern, and flex my knees to take up the shock as I "know" that in another minute, our boat will be bobbing in their wake.
Can you tell I can't wait to get back in the water?
Posted by Dan N Jaye at 16:18 No comments: 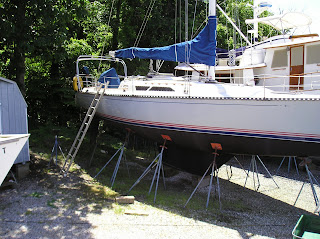 When I first heard a boat-savvy friend use the phrase “on the hard” I had all these poetic romantic thoughts about how static and unyielding land is compared to the restless ever-changing ocean. Now that we live aboard, when we’re hauled for maintenance, the phrase “fish out of water” seems a lot more apt. I think “on the hard” just describes what life is like when you live on a boat that’s temporarily out of its native element. Life on the hard is, well … hard … as living aboard begins to resemble camping out.

First there’s the climbing a ladder to come aboard. It’s interesting to be eye level with the trees, and it’s a new perspective to look down from the cockpit and see the tops of our cars parked just behind the boat. That’s about where the fun ends, though. It seems like just a few posts ago I was smugly pointing out how we conserve water by using seawater to flush. And how seawater also cools our refrigerator system, and air conditioning. Mmmm, right. No seawater up here. So bathroom, refrigerator, and A/C are replaced by older, simpler solutions -- bucket, ice blocks, and wishful thinking. It’s really good weather for painting, though, so hopefully we’ll get the jobs done and back in the water soonest.
Posted by Dan N Jaye at 16:12 No comments: