Yuck!! We started the year to learn we have cockroaches!

We've always been wary.  We are careful of what we bring aboard that critters or their eggs could hide in.  We have a "no cardboard aboard" policy rooted in the traditional cruiser knowledge that, especially in warm climates, the little nooks and crannies, and tasty glues, of corrugated cardboard serve as lovely roach nurseries. (Okay, we're not perfect; some cardboard does come aboard, specifically the boxes from red wine and laundry detergent, but we try to transfer the contents promptly and get the packaging off the boat.) But it wouldn't really matter what we do, how perfect we are aboard, because a friend here at the marina told me she has seen them crawling down the dock and up onto a boat from there!!!  We also keep a few roach tablets in the likeliest places, under the sink and in the trash can locker for example, and that has always been sufficient, until now.

It had been chilly and rainy, and moisture makes the pills less effective, and heck, if the insects had crawled aboard from dockside (yikes!) no amount of housekeeping we could do would prevent them totally. We claimed there were two species of roaches aboard: damn roaches, these are the ones that were quickly turned into squished flat roaches with the aid of a slipper or piece of paper towel; and f-ing roaches, these being the ones that scurried away too quickly for us to kill.

So we spent New Year's Day cleaning out and sterilizing all the lockers in preparation for a store run for borax to poison the little beasts when the stores reopened January second. In the process I discovered enough dried lentils, powdered coconut milk, jars of vegetarian "chicken soup" concentrate, and Gatorade/Crystal Light to soothe even the most extreme food hoarder. How had this happened? We seemed to have two reactions when finding a particular food or specialty ingredient that we liked.  Either we'd buy a bunch of it in case we didn't find it again when we wanted it or where we were currently cruising ... only to discover that after a while we burned out on it and had a bunch extra never to be used.  Or, we wouldn't stock up, assuming we could buy it when we wanted it next ... and then once we got to counting on it, next time we went shopping it was discontinued or only available in stores in the previous region we had been cruising in. Lose-lose.

Next came a game of Provisioning Tetris with the food storage containers to put everything back in the lockers. When I said one of my New Year's resolutions was to dump some baggage this was not what I had in mind.

By Day 3, after we had doubled down on the roach pills, I found a big juicy dead one in our kitchen utensils drawer. (The good news is that sucker was dead, the bad news was, well, **gasp,** roaches.) The drawer was also quite wet from our recent rainy humid weather, chilly enough for condensation, and several plastic spatulas and tools were showing dark mildew. I soaked everything in a solution of Clorox bleach and lukewarm water, then scrubbed, rinsed, and air dried. Sprayed the inside of the drawer itself with a clorox sanitizing solution. Sorted through the contents and got rid of duplicate tools and reorganized; again not the kind of "dumping baggage" for the New Year that I had intended. Then I faced this most important question: I found 3 wine cork removers and two beer bottle openers cluttering our very limited and very precious space; what drink should I reward myself with?

All seemed well for about 2 weeks, and then we had another insect population explosion.  Fortunately my friends had warned me to expect this; it was the second generation. Although we had killed off all the adults shortly after New Year's Day, the eggs they had laid continued to grow and had now hatched.

This time we decided to dust everything with boric acid roach powder.  The stuff worked great, although application was surprisingly tricky.  The package instructions said to "create a barrier through which cockroaches and other insects must crawl."  They advise putting it under sinks and stoves, below the bottom drawer of dressers or cabinets, around baseboards.  We did that, and added a heavy application in the engine room, but in the analysis we learned how terribly three-dimensional our boat-living situation is, as we found they could crawl not only up from the bilge into our living space, but across from wiring or plumbing access or down through vents.

Roach update: we have now emptied and cleaned and reorganized every single locker on the boat. Every locker, and odd little spaces like under the trash can and next to the water pump, have been recharged with roach pellets and/or dusted with roach powder . No further evidence of the little nasties. Side benefit: after this thorough sorting of our possessions, we're one more item checked off the list of "things we have to do before we head out cruising again." (But I still can't bring myself to say thank you to the little insect who gave hizzer life to get me motivated!)
Posted by Dan N Jaye at 21:11 No comments:

The "Last Step" -- Completion of the Stairs Project


Here it is, the final form of the stairs: 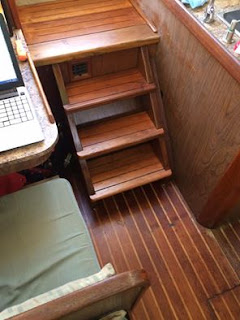 We posted photos of  the "before" and "during" phases back in early November 2015, but the project technically began in the summer of 2014. Which means that all in all, we spent a year and a half working this thing.  And a huge amount of frustration and finicky details.  There are several places where the result is not perfect ... but it is perfect for us! Now on to more interesting projects, as we continue being energized to do all sorts of things aboard, getting psyched for next winter in the Keys.
Posted by Dan N Jaye at 17:24 No comments: