Islands You Can Drive To (Florida Keys)


A chain of low limestone and coral islands over 100 miles long ... connected by a highway? Marathon, in the middle keys, has quite a reputation among cruisers as an easy place to spend the winter, and since we'd never been there, we decided to give it a try. Not as party-crazy Key West, nor as crowded as the keys closer to Miami, we were delighted to find the spot had a casual, laid-back Caribbean island feel. At the same time, it had the convenience of not having to leave the US.  In fact, the convenience extended so far as being only a couple of hours drive (drive! from an island!) to Miami and all the consumer goods we would want. Yet like the Caribbean we had palm trees and sandy beaches and clear water for snorkeling or kayaking, and warm, dry weather.

Marathon is really a small town on a group of small islands (less than 10,000 people per the last census) with a population boom during the dry season. (a.k.a., winter, but there's no such thing as winter here, no snow or frost ever recorded.)  There are literally hundreds of boats anchored or on moorings in the harbor or docked in marinas, and a similar influx of RVs.  The look, I've learned a new word, is "keysie," -- kitschy with a tropical nonchalance. It has something of a casual 50s vibe, with million-dollar homes just a few blocks away from trailer parks, and everything just a few blocks from the ocean. It has concrete block buildings with paint faded by the tropical sun -- not ill-maintained, just that the combination of strong sun and salt spray isn't kind to finishes. I'm getting used to that 50s look in south Florida.  Even though the islands were reachable by Flagler's railroad that connected them to the mainland nearly 100 years ago, large numbers of year-round residents didn't settle until air conditioning became accessible at the individual house level ... which happened, not at all coincidentally, in the 1950s, and I recognize that influence in many of the buildings here. For the rest, it does feel like we're on an extended vacation.  Dressing up means wearing the nicer of your pairs of flipflops, and a chilly day means wearing a hoodie and long pants.

The island we're on, by the way, is Key Vaca.  Vaca -- Spanish for cow.  But we're not talking moo cows here, the "cow" is the sea cow, the nickname for the manatee.

The marina itself is wonderful as well. It's got a few amenities we love, a nice lounge, a gym where I can do my physical therapy workout routine, a pool, a restaurant/bar with a good happy hour, and because it's on the west end of the island, an unobstructed view of the sunset. Our slip has a fixed, somewhat stubby concrete finger pier, and a view of a mangrove-lined cove where we can watch pelicans crash-dive for their breakfast while we sit in the cockpit drinking coffee.   Walking distance to two nearby restaurants, one Mexican and one Greek, in addition to the one on the marina grounds, and an inexpensive taxi ride to the grocery store or the beach complete our little world for now. 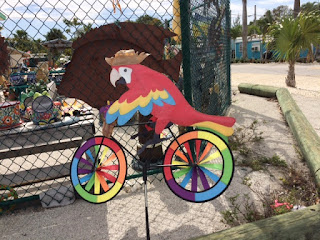 Second Half of the Cruise: Less of a Marathon to Marathon

So I had this profound insight: even a great job has bad days. And having an awesome life doesn't mean that every single minute of every single day is perfect, or even pleasant. That ridiculously obvious perspective shift was all that it took for me to refocus my thinking after Vero Beach and start enjoying the trip again, taking the days more or less as they came.  Patience is not my strong suit, never was and never will be, but my new perspective helped me maintain my mental balance. We had just over 200 miles to go, and expected to arrive at our destination in about 2 weeks.  We can do this!

And it turned out that it was a good thing that I had my "revelation" because we continued to be constrained by weather the rest of the trip. We stayed inside the ICW the entire way to Miami, tackling many timed bridges in preference to being in the ocean in high winds. We had a Coast Guard security escort due to a VIP visitor at Palm Beach; spent a great layover day Thanksgiving Day at the apartment of friends Phil and Kay (Under the Boom) joined by the crew of Octopussy; and pulled into an anchorage near Miami and were surprised to be greeted by friends Bill and Erin who informed us that this spot was a longtime favorite of theirs. Then it was an easy hop to Marine Stadium, one of our favorite anchorages near Miami, where we settled in sheltered from what we knew would be several days of 20+ knot winds. We were almost immediately greeted by a couple of guys, friendly strangers, from one of the other boats also anchored there. They had an odd accent that I couldn't place. Turned out they were a couple of engineers from Israel who, along with the girlfriend of one of them, were restoring a classic Hunter sailboat. We had lots of geeky conversations about LEDs and solar power and amp-hours and watts to pass the time while the wind howled. Also, too many beers!

Just south of Marine Stadium, when the wind finally lessened four days later, we sailed into what was the beginning of new territory for us. We saw historic Stiltsville in the distance as we headed to the south end of Biscayne Bay with a strong but weakening north wind behind us, and at the end of the day were anchored near the end of Angelfish Creek, a pretty mangrove-lined cut leading out to Hawk Channel and the Gulf. The entrance and exit were somewhat shallow, so we waited for morning, and a higher tide, to motor through.

The Hawk Channel lies on the ocean side of the Florida Keys, protected by the second-longest coral reef in the world. Only Australia's Great Barrier Reef is longer. It looks and feels like sailing in the ocean, but it's only 20-30 feet deep even several miles from shore. It was plenty bouncy, but the reef softened the worst of the waves. The water was a stunning turquoise color and clear.  Unfortunately it was also filled with lobster pots, so we took turns with one of us standing on the side rail keeping a lookout while the other steered.

More patience was required as the anchorage we'd been hoping to stop at to break the trip into two easy days proved untenable with the larger-than-expected waves rolling in from the south. Two hours farther along we found our next option, and tucked in just as darkness and a huge rainstorm fell. It had been a long day, but the good news was that we only had a half-day for our final day and we could explore our new winter home in the city of Marathon in the middle of the Florida Keys.

Our final travel day had a colorful sunrise ... and proved the old sailor's adage "red sky at morning, sailors take warning," because by the time we'd had our coffee and had the anchor up, ominous gray clouds were building all around us. It looked like we were going to get wet for sure, so we got our foulies ready. The sky on the horizon ahead was such a dark gray it was almost blue, and we were headed right for that storm cell.  Oh joy.

At sea with the limitless horizon, you can generally see weather developing hours before it will reach you. This visibility increases the dread factor, and at the same time gives you plenty of time to get ready. And we watched the individual thunderstorm cells build and track slowly along the horizon.

We were already on double-reefed mainsail plus staysail, a very stable sail configuration for our boat in bigger winds, so we weren't concerned on that score. And those sails were adding about a knot of boat speed to what we could get by motor alone. But it still looked like we were going to get rained on before we could reach the marina.  Old sailing lessons were recalled as we watched one particular nasty cell build and slowly track in front of us, across our path ahead from left to right. We quickly checked the weather radar on the cellphone and confirmed it.  If we slowed down, and steered about 20 degrees left of our true course, further out to sea, we could miss the worst of the storm as it crossed in front of us.  More patience! It cost us an extra hour rocking and rolling in the ocean, but amazingly we stayed completely dry.

The curve of the island and the shoals seemed to go on forever, but finally our new home was in sight, and the sun was shining again. We motored down a sheltered, mangrove-lined channel and followed instructions to our new slip.  With stress, but no drama, we nosed in and handed the docklines to the waiting attendant.  Time for some sleep ... after a celebratory glass of rum!

Some sights we saw along the way: