Back in 1998 when we met our first sailing mentor in the Virgin Islands, a full time liveaboard who chartered a boat only 4 feet longer than Cinderella, we privately dubbed him, "the man without possessions." I just couldn't figure out how one could live happily having given up tools, and bookcases, and photo albums and Grandma's quilt. (Remember, this was before the era in which you could scan these things. Now, all my library, my record collection, and the family photos fit in my pocket!)

So when we moved aboard, we got rid of a lot, but didn't get rid of everything. We weren't sure how long our life afloat was going to continue to be fun, though if I'd known it was going to be 16 years and counting I definitely would have made some different decisions! We kept some things that will be useful when we move to land again. And other things that remind me of people and places in my past that make me smile. The basic guideline was that we kept enough to furnish a one-bedroom apartment, plus anything that couldn't be replaced simply with cash; i.e., all the sentimental stuff. That softened the pain of giving away all of our history There really weren't many resources for downsizing back in 2002, so we sort of stumbled through by trial and error and wrote our own. And our things lived securely in a good friend's basement ... until this year, when the friends decided to sell their big house and move to Colorado. And that's how we ended up in a basement in Philadelphia, in January, going through boxes and boxes of saved possessions.

There were a few things that had us scratching our heads -- what were we thinking when we decided to store and not jettison this? Some things it had made sense at the time to store, but were overtaken by events, like tax records we needed to keep for 7 years (but that was 15 years ago, so out they go!). But mostly, there were a lot more, "hello, old friend" moments than "huh???" moments when we uncovered some bit of our past. I guess the bottom line is that while I try to be pretty thoughtful about possessions, I'd have to call us "streamlined" but not full-on Spartan minimalists.

Remember my friend "M"?  She's the one who was giving up her life in sunny "Key West" to move to the frozen north in order to get her son the help he needed. (Not exactly Key West, that's one of the details I changed to protect her privacy; the real move is an overseas one.)  I was texting with her a few weeks ago, the morning before she and her family were ready to go to their new home. She told me they had downsized to the very very max, because shipping was going to be so expensive. They had checked a total of 160 kg (about 350 pounds) of possessions, for a family of 4, plus their carryons -- and that was all they owned anymore. Everything else had been sold, all their furniture, cars. The hardest for her, she said, was her books, but she found someone who had studied a similar subject in college who was delighted to have them, so that finding of a good home helped considerably. The boys also got into the act, selecting which toys to take and which to give away, and sorting through a lot of broken stuff. I joked that she was ready to live on a boat, like us. She said that with the going through everything, she found so many things that looked like they would be handy when first purchased, but in reality she only used them once or twice. Her house felt so much bigger with those gone. The last two weeks, they were living with just the basics, those essential things that were coming north with them. And, she said, "I'm definitely going to try to keep it small," in the next place. "I really enjoyed living with just the basics."

We get it, we really do. In some ways our last 16 years on the boat, has been a long vacation from our own "stuff" that has been in storage.

What Is Successful Cruising?

How do you define "successful cruising?" For some, it can be pretty objective. If you've set out to sail around the world, then you have achieved "success" when you've circled the globe and come back home. Or on a smaller scale, if you've set out to spend the winter in the Florida Keys, then you're successful if your boat is still floating in the spring. But if your plans are less specific, then your definition of "success" gets fuzzier as well. Or does it?

A few of my friends have had to pause their cruising for a while recently, for extensive boat work, for medical issues, to earn some money. And one of them posted in his blog yesterday, certainly not defeated but almost apologetic, twice over. Seeming apologies once as though he was letting his readers down by not having new stories to tell. Seeming apologies a second time because he had always been a proponent of "go small, go NOW." But after two years he and his wife had since decided that living on that much of a shoestring wasn't fun, so they were going to take a break and come back with a comfier budget.

I posted back to him, "But, you have gone! You've had adventures, and learned, and are refining your original plan based on what you've learned. Think of it as preparing for the next adventure. Some days are wild and some days are ... mild. And sometimes you just lay low while the bank account rebounds." Plans evolve. Or as our cruising mentors have quipped, "Plans are firmly cast in jello." "Plans are written in sand at low tide." I'm pretty sure my friend will be back, just in a different way and timing than he first expected. With the additional self-knowledge gained from his experience, it will probably be better than ever, because he and his wife are smart like that.

Heck, we're in somewhat in that not-quite-the-way-we'd-planned-it situation ourselves; between Dan's hip surgery and recovering the expenses of 2017 from winter in the Keys to summer in Canada on El Galeon to Hurricane Irma to reclaiming the possessions stored in my BFF's basement, Cinderella has been stationary the last year. And taking advantage of unexpected delightful opportunities is easier when plans are viewed as guidelines and not promises.

I thought we'd take Cinderella down to the Caribbean. It didn't quite turn out that way. I had visions of jumping off the stern to go snorkeling every afternoon, like we did when we were on vacation. Our first cruise took us down the ICW to the Bahamas. Two months getting there, then we spent three months in the islands, learning and exploring, and then three months headed back to Annapolis where we started. After we returned we spent some time comparing the reality to the fantasy. What I learned was, you can't be on vacation forever. Well, maybe you can. I can't. I get bored, want to learn new things, make a contribution, be part of a community. We learned that we love living on the boat, and we learned that about three months at a time was about as long as we preferred to live out of the U.S./Canada. Actually we'd known that last, the three-month limit, about ourselves before, and had proved it to ourselves multiple times; this latest was just reconfirming that. So our plans evolved, as plans are wont to do. We still have plenty of time in the Caribbean every year, just, not year round and not on this boat.

With what we've learned about ourselves so far we are designing a cruising life that fits our personalities even better than the one we first visualized, and it continues to evolve. Ours, we have now learned, involves tall ships, and road trips, and periodically, something new and wildly different. (Got one coming up this fall that I'll tell you about soon!) That's also part of the freedom of living a possession-light life, on a boat. You get to change your plans easily. When your only new year's resolution is, "have more adventures," it's pretty easy to declare the resolution honored. I never set out to be a great sailor. I wanted to have a great life, while sailing. I call that, "success."
Posted by Dan N Jaye at 15:38 10 comments:


What were the biggest adjustments moving aboard after living on land? Well, certainly a major one was the drastic difference in square footage. We could take about 1/20 of our land-based possessions, and none of our furniture. We sought digital books except for reference books, scanned photos, ripped CDs, and converted recipe cards to tidy computer files. We prioritized what would come with us: first safety, then tools, then "everything else." And that "everything" had to fit in the equivalent of your kitchen cabinets -- not just pots and pans and food, but backpacks and winter sweaters and screwdrivers and blankets and hiking boots and beach towels -- so the downsizing was extreme.

Another big adjustment was -- it moves! That implied both that we could never set anything down unattended on a flat surface; an errant wave could dump your coffee cup in your lap. It also meant our freedom, as we could explore the world without ever leaving the comforts of home, because we traveled like a turtle and brought our home with us. (Also like a turtle as, laden with everything we own, we don't exactly sail fast.)

Past those two, the biggest adjustment involved no longer being connected to the limitless conveniences of life on land, like infinite water and power. If we're at sea, or anchored out, the water and fuel we brought with us is all we have until we make our next port. We might get lucky with a rainstorm to top up our fuel tanks, but the gasoline we brought with us for the dinghy is all we have until we're back in civilization.

And limited, not-so-environmentally-friendly fuel wasn't the only problem with the dinghy's propulsion. Add a bigger, heavier outboard than we would have preferred, and we began thinking about options. You've already learned of the crazy string of small world coincidences that led to our new-to-us folding dinghy to replace the inflatable. The existing 9.8 hp motor, weighing about 90 pounds, was massively oversized to be usable on the light and nimble folding boat. 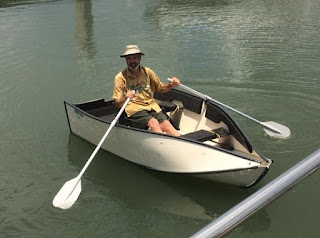 I jokingly told my friends that we had equipped the new folding dinghy (now nicknamed "Pumpkin II") with a "reliable two-stroke engine." And it does row easily. Oars never need fuel and remind us of good times with our old rowing dinghy in Michigan. And for the times that rowing is not quite going to be enough?

Meet "Mouse," named for the mice that became horses and footmen for Cinderella's pumpkin-turned-coach. Like those mice, our "Mouse" is small and gray and slightly magical. Mouse is an electric Torqeedo motor that pairs perfectly with the new dinghy. Electric means that we won't have any further issues with ethanol in gasoline when we travel north or to places with unreliable fuel, or fuel at all, ever, really. We can charge its lithium batteries with our solar panels, doesn't get to be much more of a renewable resource than that! 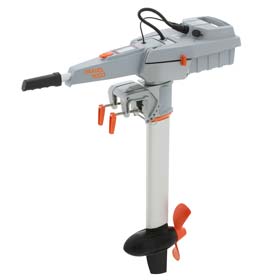 We can set up or collapse the folding dinghy on the bow of Cinderella; here's a sequence of pictures showing the process, which took one person about 10 minutes. As fast or faster than pumping up an inflatable. 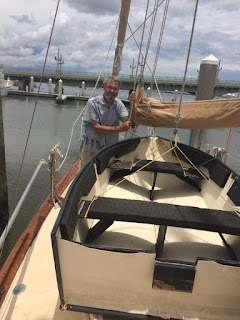