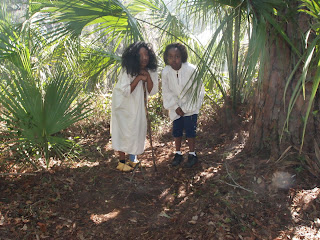 Some people I know travel with the apparent objective of collecting photographs of themselves with various iconic landmarks in the background. A tour through their photo album might be like – “Here’s me in front of the Eiffel Tower; and here’s me at the Grand Canyon; and here’s me at the Washington Monument” – more like a giant timed scavenger hunt through life than a viewpoint-widening adventure.

Here’s a hint: if the above describes your style, think about doing most of your traveling by car or airplane. Don’t travel by sailboat. It’d be waaaaay too slow.

On the other hand, if you’re all about digging deep and discovering unexpected tidbits about the places you pass through, then traveling and living on a boat may give you the time at each spot along the way to do that. That explains why, after we’d seen the major tourist highlights of the town (lighthouse, check; old fort, check; St George Street, check; Fountain of Youth, check), we found ourselves at an unprepossessing state park that just happened to be the site of the first free black settlement in the U.S.

The site itself is peaceful and parklike now; nothing remained of the wooden fort, Fort Mose, that once stood here. We strolled the boardwalk and watched the herons and egrets and wood storks that congregated there, and tried to imagine the scene here 250 years ago.

The famous “Underground Railroad” for runaway slaves ran to the SOUTH here, not north. You see, Florida was Spanish, not British. So runaways who were brave and resourceful enough to survive the flight through nearly 400 miles of swampy terrain between South Carolina and Florida could essentially cross the border into another jurisdiction. The Spanish welcomed the runaways and promised them freedom on 3 conditions: they had to swear an oath of loyalty to Spain, convert to Catholicism, and serve in the militia. Spain and Britain were (*ahem*) not on the best of terms during this period, so this was quite a win for Spain. They could chip away at the enemy’s economic resource, increase their own population, and fill their militia with intensely loyal motivated soldiers. What an amazing story! Remember I made a commitment to myself to read one non-fiction book per month? I just figured out what I want to read more about for February.
= = = =
More photos from this event are at Life Afloat on Facebook.
Posted by Dan N Jaye at 23:29