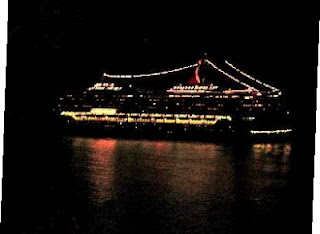 Cruise ship at night - it is easy to tell what this is from its lights, but not all vessels are so readily identified. (Photo modified from Villa Serendipity, St Lucia)

Our boat doesn’t have radar.  At night, especially, we keep a good watch and have learned to identify other boats by their lights, and to call them on VHF radio to avoid collision.  It’s counterintuitive, but the ocean is actually easier than the Chesapeake Bay for night sailing, there’s just less traffic to interact with.  In the Bay you are constantly alert, over the course of the night there was always at least one set of lights somewhere in our field of vision.  On the ocean you can go hours, sometimes days, between sighting other vessels.

This happened last week on our overnight trip up the Chesapeake Bay.  It was some time after midnight and the moon was not yet up.  Dan was asleep; I was alone on watch with the stars and my thoughts.  There wasn’t a lot to do, the autopilot was humming happily, every few minutes I’d look carefully in all directions to make sure there were no surprises.  But even if I wasn’t keeping watch, I’d want to look around anyway, the night was mild and pretty, stars peeking in and out through light clouds.  So I watched.  And thought.  There’s nothing, nothing, like being alone at sea, at night, for figuring out if you like yourself.

We’d passed and been passed by four of ships in the last couple of hours.  Busy night!  Ahead, very small, were the lights of yet another ship.  It was too far away to be a concern yet, but I decided to watch it to make sure we weren’t on a collision course.

Fifteen minutes later, it was almost imperceptibly larger and closer, and hadn’t deviated – it was still directly on our bow.  I couldn’t figure out what it was based on its lights, but if it kept getting closer and the direction didn’t change, we were going to collide.  I remembered our training – a small reaction or course change early does as much good, and is certainly preferable, to a big panicky change later.  I tried altering course by 20 degrees, and waited to see what would happen.  Nope, they’re still there.  Okay, call them on VHF radio and see what they’re up to.  Nope, radio silence.  This is starting to get serious.  What else to try?

Another ten minutes, they’re Still. Right. There.  Bigger, weirdly-shaped, but Still. Right. There.  Time to wake Dan up, I don’t quite understand what we’re up against, it might take two.  But he didn’t have any ideas either.  We continued, both of us alert now.  Bright and large, it loomed closer.  Until finally the mystery ship began to drift to our left, we still didn’t know what it was, but at least we were no longer going to crash.

As we came alongside, we finally understood – it wasn’t a ship at all, but the lights of the nuclear plant at Calvert Cliffs.  And this understanding was even more worrisome than an unidentified ship.  We sail totally sober – always – but our thoughts were so addled, it was as though we had had several drinks.  Learning how profoundly tiredness affected our decisionmaking was (forgive the pun) truly eye-opening.

(Turns out, this trouble with lights at night isn’t that unusual.  We told our story to our sailing mentors James and Ellen, who sheepishly admitted that each of them once did almost the same thing mistaking the glow of the rising moon below the ocean horizon for an oncoming ship.)