A Rant: Generalizations About Liveaboards


May I vent, please?

So, someone has bought a boat, and rented a marina slip, and they’re limited in the number of nights they can sleep aboard their own boat in their own marina slip because the marina doesn’t allow living aboard?  Whazzup wi’ that?

Some marinas, like ours, welcome liveaboards.  Others forbid it.  I don’t mind if a marina wants to ban living aboard at their facility; they’re a private organization that can associate with whoever they choose, or not associate.  There are all sorts of completely logical and impartial reasons to restrict living aboard at a particular marina. For example, there may not be sufficient infrastructure (electricity or parking spaces, say, or accommodations for winter conditions) to support a fulltime population.  Or, more nebulous but still reasoned, the owners may be trying to create a particular ambiance welcoming to transient boats and cruising travelers.  These owners might be concerned about creating a vibe that long term liveaboards on a dock would perceive as a tight-knit community, but that transient newcomers would perceive as cliquishness.

But when marinas ban living aboard because of incorrect generalizations about what people who choose to live aboard are like, and what problems liveaboards may cause or avert, then I have issues. There are numerous myths and assumptions about liveaboards, that they are all dropouts and losers (far from it – our liveaboard neighbors have included a District Court judge, a retired physicist, nurses, pilots, IT  and telecom professionals, a jeweler, several artists, writers, and Washington bureaucrats); or that liveaboards use resources without paying property taxes (um, no, we pay property taxes the way any other renter would, by subsidizing the landlord’s taxes on his property incorporated into the rent of an apartment or marina slip); or that this is the best they could do and they are one step away from being homeless (no, I’m houseless, not homeless, and I’ve chosen this liveaboard lifestyle that relies less on material consumption and more on being in touch with nature); or the generalization that’s irritating me today, that liveaboards are slobs with derelict boats that will ruin the image of the marina.

I don’t accept “We don’t want liveaboards because they are all messy and all their boats are ill-kept floating junk,” as a valid reason for banning liveaboards.  Liveaboards are no different than any other group of people.  Some are good citizens, and some are a bit sketchy.

Not all liveaboard boats are messy, and not all messy boats are lived aboard.  If a marina business is concerned about appearances, they can ban liveaboards, but there’s a problem with this solution.  Banning liveaboards will keep out the messy liveaboards, those whose boats are unable to travel under their own power and are just floating very small condos, and those whose clutter expands to the deck of their boat, and then the surrounding finger pier and dock.  But that ban will also eliminate some good folks, like the liveaboards who provide security for the entire marina by noticing potential problems with neighboring boats, or people who don’t belong.  In addition, if a marina implements the “ban liveaboards” solution, some messiness will remain, from people who only visit their boats on weekends, are not invested in the community, and have messy boats because they are not there to see the boat very often and the condition of their boat is out of sight and out of mind.  If a marina is concerned about clutter, they could simply make an objective rule that nothing is allowed on docks or common areas – simpler to explain, measure and enforce, and more likely to achieve the desired result, than counting or restricting the number of nights owners can visit their boats.  Similarly, if they’re concerned about boats rotting at the docks, they can require that the boat leave its slip at least [once a month/once a season/ whenever] to prove that it’s seaworthy.

So, a modest challenge: can you spot the liveaboard boats in these photos?  All the pix were taken 28 December 2012, on our dock at our marina. 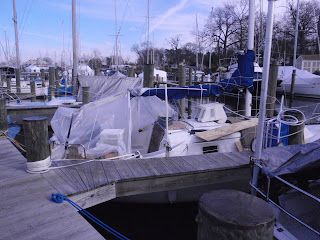 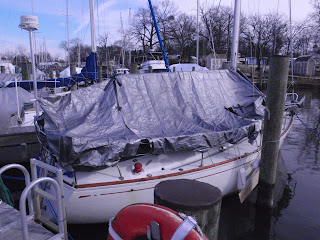 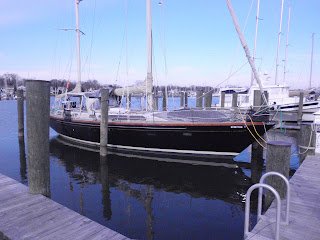 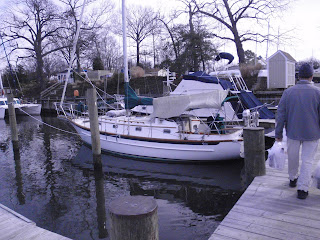 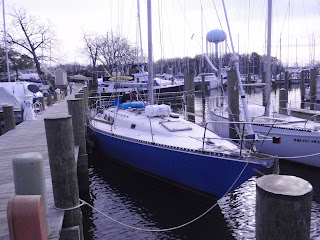 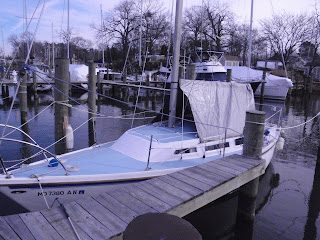 [Were you able to guess just by looking?  Numbers 1, 3, and 5 are permanent full-time liveaboards; numbers 2, 4, and 6 are occasionally visited by their owners on weekends.  The owner of one of the neatest of these boats, a retired physicist in his 70s, has lived aboard for many years; the owner of one of the messiest is a very congenial local doctor who is too busy to get to the boat as often as he would like.  So much for assumptions.]

If you’re concerned about something, have the honesty and courage to address it directly.  Don’t make generalizations about a group of people and assume that all members of that group have the characteristic you’re concerned about.  Okay, vent over; thanx.  And now, back to our regularly scheduled programming.