Our Aruba Vacation: Part 1 - The Basics, A Geography Lesson

(reprinted from my blog from 2011, last time we were here we stayed all winter) 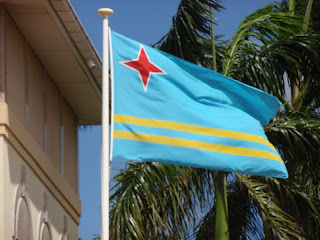 Yes, we love this desert island in the southeastern Caribbean. Here’s your geography lesson for the week (winking at H. if she’s reading).The island is 19 miles long and 6 miles wide. Politically, it is part of the Netherlands but has a semi-independent status. As I understand it, the island is self-governing but Holland takes care of some things such as national defense; I think it’s somewhat analogous to the relationship between the U.S. and Puerto Rico. The local language is Papiamento (more on that in a moment), but everyone is wonderfully multilingual and generally speak 3 other languages in addition – Dutch (Dutch is used for official business, and also there are many tourists from the Netherlands), English, and Spanish. 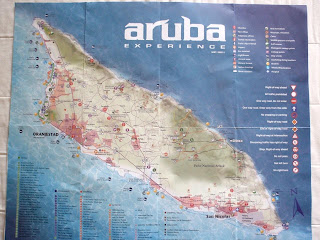 We studied a bit of Papiamento; I love the insights you get into a culture by understanding the structure of the language. In Papiamento, the pronouns for ‘he’ and ‘she’ are the same – does this imply an underlying gender equality? There are 3 different words for ‘relax’ but only one for ‘work’ – don’t you love those priorities? (We have no way in English, for example, to distinguish between ‘relaxing by resting’ and ‘relaxing by playing,’ if you get the idea). Best of all, they have no word for weather, and no jobs for weather forecasters!Why bother? It’s always 82 degrees and sunny, and south of the hurricane belt. 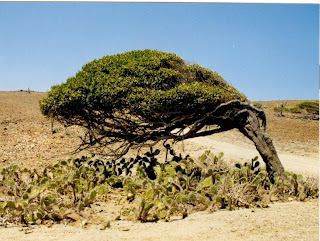 The trade winds blow constantly from the east. The iconic divi-divi tree, something of an island symbol, shows the effects of these winds by growing only in one direction [photo – divi tree]. The windward (northeastern) side of the island is wild – rugged, dry, and desolate, waves crash on rocky cliffs.[photo – crashers and splashers] The leeward (southwestern) side is mild, with miles of gorgeous sandy beaches and extensive development – tourism is the number one industry. [photo – palm beach] There is also a bit of oil revenue and a refinery. There’s somewhat less grinding poverty, and somewhat higher education, than many other islands we’ve been on. The total population is about 100,000 (?) mostly concentrated on the downwind side. [pink areas on the map are population centers] Most of all, the people are utterly fantastic, friendly not because you’re a tourist and they want your money, but just because that's the way they are. 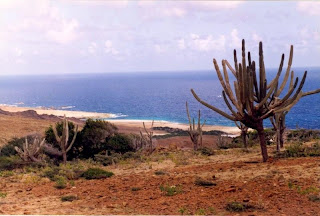 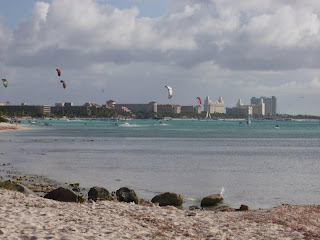 Or, to put the geographic location in a different perspective: 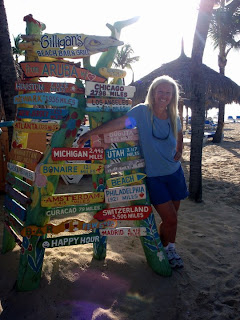