Do the First Part 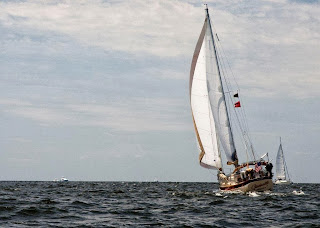 Back when I was a manager in the business world, I attended a team-building/leadership retreat (actually, I attended many, but this one stood out in my mind for several reasons).  One of our group’s exercises during this retreat involved a 5-gallon bucket brim-full of water.  We had to move it without touching it or spilling any of the water, using only some ropes of varying lengths that we were given.  There were a convoluted set of rules: for part one, we had to move the bucket down the hall without setting it down; for part two we had to get the bucket to the middle of a 10-foot circle that none of us was allowed to set foot inside.  If any of various fouls, faults or “accidents” occurred along the way, our team would incur a penalty and have to complete the exercise with some members blindfolded or one-armed.

We planned how we would do part one, suspending the bucket on a rope stretched taut between two team members, and walking it to the edge of the circle.  But we were unable to reach a consensus during the planning meeting about how to manage part two: if we tried to drag the bucket across the circle using a single line, would we risk spilling it?  If we tried to stretch the line from part one with a couple of team members on opposite sides of the circle, would we be able to lift it high enough? Would we be strong enough?  Back and forth the ideas went.

“Hey, guys, listen,” I said.  “We don’t know how to do part two, but we know what we want to do for part one.  So, let’s do part one, and stop when we get to the edge of the circle.  Maybe we’ll learn something doing the first part that will help us figure out how to do what comes next.”

During the debrief, the instructor pointed to this as a leadership moment.  Wait, leadership?  Who, me?  I got credit for it, but, all of you are my readers and my friends, so I’ll let you in on a secret.    If that moment was leadership,  it was accidental leadership, a byproduct of impatience.   I was just frustrated with standing around, I wanted to do something. We couldn’t figure out what to do next without more information, and we couldn’t get more information just standing around speculating about how the bucket would behave without actually, you know, manipulating the bucket.

There are some new cruisers-to-be on our dock, diligently getting their old boat ready to go.  Timing a departure is always a careful balance, and even more so in the autumn.  There’s a narrow weather window – leave too early and you risk hurricanes, leave too late and there are bitter cold winds and nor’easters.  You want to take the time you need to make your boat safe and ready and comfortable, but the clock is ticking and Old Man Winter is nipping at your heels.  Our neighbors were suffering a bit of analysis paralysis.   Last week it was about anchor chain.  The previous owner had left them several anchors and 300 feet of chain, which was sufficient for anchoring in the varied and extreme conditions of a round-the-world voyage.  But  most of the chain had rusted into an unusable mess.  The new owners were able to salvage 75 feet of this and attached it, along with 200 feet of rope rode, to the best of the anchors.  Then they began researching the best way to replace the other 225 feet, the best kind of anchor to attach it to, and the best way to store it to keep the rust from happening again.  They asked lots of people for advice and what to do, including us and our friend Dave.  But it was Dave’s answer that was the most startling.  Because what he advised them to do was … nothing.

Seventy-five feet of chain, plus 200 feet of rope rode, with the anchor they already had, Dave explained, was all they needed for their planned trip down the ICW to the Bahamas.  Once they had done that trip, they would know if they wanted to make living on a boat and traveling a permanent lifestyle and go further, or whether it was just a pleasant interlude and they were done and would sell the boat and move back to land.  If they decided this life wasn’t for them, they wouldn’t have invested unnecessary time and money in additional anchors. “If you decide to keep going,” Dave said, then you’ll need more that that 75 feet that was adequate for the first part of the trip.  “Just move that 75 feet to be your backup anchor, and get a new bigger primary and more chain. By then, you’ll know what you need for your boat and the way you like to cruise.”

In other words, do the part you already know, part one – get off the dock and GO.  Maybe you’ll learn something doing that first part that will help you figure out how to do what comes next.