Ironic that this post immediately follows the one about the spa-cum-ordinary-land-based-shower, but sometimes thoughts just happen when they happen. I must be subconsciously pondering the topic of physical comfort, because this is the flip side of the coin. Discomfort ... in service to a greater goal.

When we were on the Galeon, I'd sometimes get in conversations with visitors about the details of life aboard. Most people would look at me with a bit of wonder, and say, "Oh, I could never do what you do." The most common reason they'd give was a tendency to seasickness. I've only be seriously seasick once, and it was because I was hung over, so it was my own fault. But the experience gave me a lot of insight, and if I were prone to seasickness, I would never have moved aboard either.  Once past the seasickness conversation, people's reasons varied. Older women in particular (not always, but common enough to be a trend) would often announce that they would be unwilling to handle close quarters, lack of privacy, being away from their grandkids, and the comforts of home.

I explain that it's kind of a package deal. Physical comfort is nice, but ... overrated. Okay, I like being comfortable and wouldn't voluntarily be uncomfortable for the heck of it, but I'm quite willing to be uncomfortable if that's the price I pay for an astounding adventure, like spending a summer on a traveling tall ship. It wasn't the first time we traded comfort for experiences. When we lived in Colorado, we went backpacking one October to listen to the elk bugling. Not because I like being cold and sleeping on the hard ground, but because we wanted to see and hear this phenomenon for ourselves. (Turn your computer sound up when you check out the above YouTube video, it's remarkable. National Geographic also has an interesting video about it.) It was every bit as amazing as we expected, and being stiff and sore the next several days, from the long hike and bad sleeping, was a price we were happy to have paid. 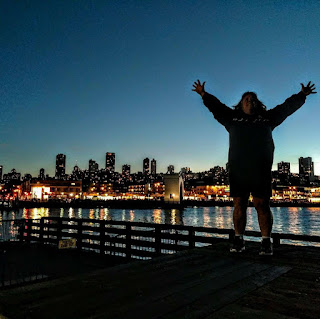 But our willingness to endure discomfort as the price of the admission ticket for adventure pales in comparison to that of my friend Kristine. She's really one of my heroes, and her latest undertaking has inspired me. She was the bartender at our local pub, and she had a dream of backpacking around the world. Of course, money was going to be an issue, but this girl gives new meaning to the word "determination." In service to her dream, she was willing to do anything that was ethical. (Not necessarily legal; sadly, those two words are not synonymous.) She pinched every penny she had. Up to the point of deciding to live in her truck for 14 months, voluntarily homeless, to save rent money. She wrote about the decision in her blog, and one evening she told us stories of couch surfing with friends or sleeping behind the bar after close when it was too cold to stay in the truck. She posted lovely sunrise photos from the parking garage (how does one tend bar until closing time at 2 AM and still wake up in time for sunrise?) She made healthy meals from the sandwiches they served at the bar -- however repetitive and boring after a while, she used her employee discount to save money. A lot of her clothing came from thrift stores. And then she took seven months off, packed a single rucksack and a sturdy pair of boots, and planned an itinerary that included lots of buses and hostels, and would literally take her around the world, from Florida to California to New Zealand and Australia (so far), and fills my Facebook feed with spectacular photos including the ones I've included, in what she now calls her "signature pose," celebrating life to the fullest possible. She's got a YouTube channel ("Rucksack Rambler") and a blog that I'm sincerely anxious to see her update, but right now she's too busy having adventures to write about them. Admirable. 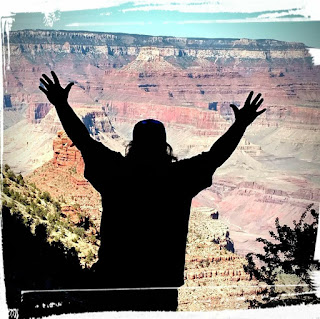 (Note: In a weird coincidence, another blog I follow posted encouraging you to think about the heroes in your life, on exactly the same day that I first drafted this post about Kristine, the first of a few planned posts about people I consider admirable.)