Political Rant: Do We Still Deserve the Statue of Liberty?


Virtually all of my El Galeon shipmates have photos or selfies with the Statue of Liberty in the background as we came into New York harbor last summer. Not me, I was at the helm at the time, so that's my view above. And I reminisced that exactly 100 years previously my grandmother would have had a similar view as she entered New York harbor by boat as I was -- except she and her family were fleeing World War I Russia when she was a young teenager.

But our current political immigration crisis has me wondering whether we deserve this graceful lady any more. I can't even fathom my former "friends" who aren't horrified.

One of my friends on the political right asked where I thought we go from here. Obviously I'm not setting policy in this administration but here's what I wish would happen:


Not like the brazen giant of Greek fame,
With conquering limbs astride from land to land;
Here at our sea-washed, sunset gates shall stand
A mighty woman with a torch, whose flame
Is the imprisoned lightning, and her name
MOTHER OF EXILES. From her beacon-hand
Glows world-wide welcome; her mild eyes command
The air-bridged harbor that twin cities frame.

"Keep, ancient lands, your storied pomp!" cries she
With silent lips. "Give me your tired, your poor,
Your huddled masses yearning to breathe free,
The wretched refuse of your teeming shore.
Send these, the homeless, tempest-tost to me,
I lift my lamp beside the golden door!"

The Washington Post has a great fact checker piece on this here.

Here's a few additional facts from Michelle Martin, PhD Cal State Fullerton. She summarizes a lot of misinformation that is floating around about the issue; after each point is a link to the original article.

"There is so much misinformation out there about the Trump administration's new "zero tolerance" policy that requires criminal prosecution, which then warrants the separating of parents and children at the border. Before responding to a post defending this policy, please do your research...As a professor at a local Cal State, I research and write about these issues, so here, I'll make it easier for you:

Myth: This is not a new policy and was practiced under Obama and Clinton - FALSE. The policy to separate parents and children is new and was instituted on 4/6/2018. It was the brainchild of John Kelly and Stephen Miller to serve as a deterrent for undocumented immigration, approved by Trump, and adopted by Sessions. Prior administrations detained migrant families, but didn’t have a practice of forcibly separating parents from their children unless the adults were deemed unfit. link

Myth: This is the only way to deter undocumented immigration - FALSE. Annual trends show that arrests for undocumented entry are at a 46 year low, and undocumented crossings dropped in 2007, with a net loss (more people leaving than arriving). Deportations have increased steadily though (spiking in 1996 and more recently), because several laws that were passed since 1996 have made it legally more difficult to gain legal status for people already here, and thus increased their deportations (I address this later under the myth that it's the Democrats' fault). What we mostly have now are people crossing the border illegally because they've already been hired by a US company, or because they are seeking political asylum. Economic migrants come to this country because our country has kept the demand going. But again, many of these people impacted by Trump's "zero tolerance" policy appear to be political asylum-seekers. link

Myth: Most of the people coming across the border are just trying to take advantage of our country by taking our jobs - FALSE. Most of the parents who have been impacted by Trump's "zero tolerance" policy have presented themselves as political asylum-seekers at a U.S. port-of-entry, from El Salvador, Guatemala, and Honduras. Rather than processing their claims, they have been taken into custody on the spot and had their children ripped from their arms. The ACLU alleges that this practice violates the Asylum Act, and the UN asserts that it violates the UN Treaty on the State of Refugees, one of the few treaties the US has ratified. This is an illegal act on the part of the United States government, not to mention morally and ethically reprehensible. link

Myth: We're a country that respects the Rule of Law, and if people break the law, this is what they get - FALSE. We are a country that has an above-ground system of immigration and an underground system. Our government (under both parties) has always been aware that US companies recruit workers in the poorest parts of Mexico for cheap labor, and ICE (and its predecessor INS) has looked the other way because this underground economy benefits our country to the tune of billions of dollars annually. Thus, even though the majority of people crossing the border now are asylum-seekers, those who are economic migrants (migrant workers) likely have been recruited here to do jobs Americans will not do.  link

Myth: The children have to be separated from their parents because there parents must be arrested and it would be cruel to put children in jail with their parents - FALSE. First, in the case of economic migrants crossing the border illegally, criminal prosecution has not been the legal norm, and families have been kept together at all cost. Also, crossing the border without documentation is a typically a misdemeanor not requiring arrest, but rather a civil proceeding. Additionally, parents who have been detained have historically been detained with their children in ICE "family residential centers," again, for civil processing. The Trump administration's shift in policy is for political purposes only, not legal ones. See p. 18:  link

Myth: We have rampant fraud in our asylum process the proof of which is the significant increase we have in the number of people applying for asylum. FALSE. The increase in asylum seekers is a direct result of the increase in civil conflict and violence across the globe. While some people may believe that we shouldn't allow any refugees into our country because "it's not our problem," neither our current asylum law, nor our ideological foundation as a country support such an isolationist approach. There is very little evidence to support Sessions' claim that abuse of our asylum-seeking policies is rampant. Also, what Sessions failed to mention is that the majority of asylum seekers are from China, not South of the border. Here is a very fair and balanced assessment of his statements: link

Myth: The Democrats caused this, "it's their law." FALSE. Neither the Republicans nor the Democrats caused this, the Trump administration did (although the Republicans could fix this today, and have refused). I believe what this myth refers to is the passage of the Illegal Immigration Reform and Immigrant Responsibility Act, which were both passed under Clinton in 1996. These laws essentially made unauthorized entry into the US a crime (typically a misdemeanor for first-time offenders), but under both Republicans and Democrats, these cases were handled through civil deportation proceedings, not a criminal proceeding, which did not require separation. And again, even in cases where detainment was required, families were always kept together in family residential centers, unless the parents were deemed unfit (as mentioned above). Thus, Trump's assertion that he hates this policy but has no choice but to separate the parents from their children, because the Democrats "gave us this law" is false and nothing more than propaganda designed to compel negotiation on bad policy. link https://www.independent.co.uk/…/trump-democrats-us-border-m…

Myth: The parents and children will be reunited shortly, once the parents' court cases are finalized. FALSE. Criminal court is a vastly different beast than civil court proceedings. Also, the children are being processed as unaccompanied minors ("unaccompanied alien children"), which typically means they are sent into the custody of the Office of Refugee Resettlement (ORR), which is part of the Department of Health and Human Services (DHS). Under normal circumstances when a child enters the country without his or her parent, ORR attempts to locate a family member within a few weeks, and the child is then released to a family member, or if a family member cannot be located, the child is placed in a residential center (anywhere in the country), or in some cases, foster care. Prior to Trump's new policy, ORR was operating at 95% capacity, and they simply cannot effectively manage the influx of 2000+ children, some as young as 4 months. Also, keep in mind, these are not unaccompanied minor children, they have parents. There is great legal ambiguity on how and even whether the parents will get their children back because we are in uncharted territory right now. According to the ACLU lawsuit (see below), there is currently no easy vehicle for reuniting parents with their children. Additionally, according to a May 2018 report, numerous cases of verbal, physical and sexual abuse were found to have occurred in these residential centers. link

Myth: This policy is legal. LIKELY FALSE. The ACLU filed a lawsuit against the Trump administration on 5/6/18, and a recent court ruling denied the government's motion to dismiss the suit. The judge deciding the case stated that the Trump Administration policy is "brutal, offensive, and fails to comport with traditional notions of fair play and decency." The case is moving forward because it was deemed to have legal merit. link

And finally, context matters!! There's this: 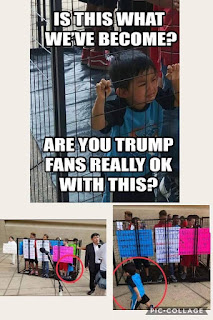 The original, upper pic was a facebook meme on the left; the two below are debunking it as "fake news." Well, what, exactly, is fake? I mean, the child really was looking through a wire grate. It's a picture of a real thing. But it's been cropped. The implication, that this child is sad because he's detained away from his parents, apparently that is not his particular context,thus fake. (Besides, the cages, "separations that happen to have been made of chicken wire" as the unfortunate spokesman for the administration put it, weren't this smooth.) The excuse now seems to have been, that since people didn't have access to the child custody facility that this was okay in order to elicit the intended response. It is unfortunate that, as my Marine Corps friend Matt put it, "politicos with agendas are maximizing the opportunity for propaganda with stuff like this. Can't blame them, it is effective, although misleading. Problem being that when one gets caught doing this it damages credibility, takes away from the message and hurts the cause. It shows a level of insincerity that screams politics over compassion." Similarly on the right, my friend Paula said she saw a picture of "child being taken away from his family in Miami at gunpoint to be returned to the country he came from" during the Clinton administration; without the context that the child was Elian Gonzalez and the family was the extended family that had refused to release him so he could be returned to his father. This whole thing stinks.