Replacing the chain plates is a project that I'd wanted to do for a long time. The chain plates are the bases that the standing rigging (the cables that hold up the mast) attach to, so their integrity is pretty important! Ours were as old as the boat, 40 years. Because they pass through the deck and are buried in fiberglass, it was impossible to inspect them completely, so we just made the assumption, erring on the side of caution, and bit the pricey bullet to replace them while the boat was out of the water for the summer. It also helped that we had removed all our possessions and taken them with us to the townhouse, as the work would involve getting into many of the storage lockers.

Access to remove and replace them was going to be problematic. It looked like there was no way to do the job without destroying some cabinetry. We proposed instead to install the new ones on the outside of the boat, leaving the old ones in place to use as backing plates. This would give it a strappy, classic look that we were grudgingly coming to accept, though not as sleek as the original, it would do the job safely and well. It was also the approach that many people on the CSY owners forums had taken.

So we were surprised and delighted when the staff at Oasis said they thought they could give us internal replacement chain plates that exactly matched the originals and that approach would be cheaper than the external installation we anticipated. Yes! Let's do this!

And now for the work on Cinderella: 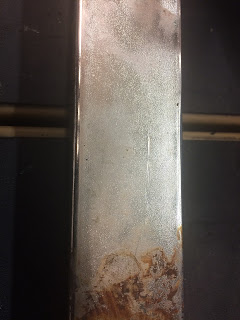