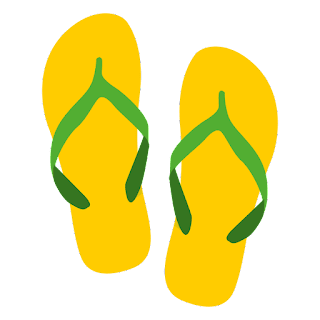 I got them with my friend M when we went to a launch party for a new brand of beer. The company had gone to considerable effort with the party, going so far as to close the street and truck in enough sand to make a "beach" party. (I'm not exactly sure why they did that when the real beach was just a couple of blocks away. Whatever.) The bands were excellent, there was tons of food and swag and free beer. The problem was that the beer was awful. M and I joked about how bad this beer was, it remains a running joke between us now even though she has since moved halfway around the world.  I won this pair of flip flops at that party. They are not comfortable. Really cheaply made, they don't fit right -- too long in the toes and too short in the heels. But they make up for being uncomfortable by being ugly. The soles are printed with the logo of that tasteless beer in gaudy colors.

So, to summarize: I have flip flops I don't like, advertising a beer that I don't like, that I'm not at all sentimental about, taking up space in our storage. (Granted, they don't take a lot of space.) And I have much much better memories of friend M that I can call to mind whenever I want, photos and books and adventures we had together. So I really don't need these particular tangible reminders. Why, then, haven't they been thrown away?

Well, it's precisely because I can call M to mind whenever I want. But I have to actively decide to think about her. The ugly flip flops ambush my vision at totally random times and bring her up unexpectedly. Like she pops into my brain of her own volition, and says, "Hey, remember that time I brought the boys to your place and you went down the slide with them over and over again?" or "Remember when the Indonesian restaurant did a pop-up dinner in the middle of the mall?". Always a pleasant surprise. So that's why I still have those stupid ugly flip flops ... just for the randomness of it.