The average American kitchen has so many small electric appliances, and we take so much for granted that there's a "labor-saving" tool for every task. Downsizing these was one of the more dramatic adaptations we had to make when moving aboard. Here at the marina, we have electricity, but as you saw in the photo from the previous post, we have so little space in the galley that we had to prioritize on which to keep. Prioritzing meant, no one-purpose items - blender, okay; Belgian waffle iron, not so much. Now when someone asks me about a bread-maker or dishwasher, I hold up both hands and wiggle my fingers - "This is my dishwasher."

For those times we are anchored out, not attached to the shore power, hand-operated appliances are key. Here, the issue - in addition to space - is power usage. Things that use electricity to make heat, like a crockpot or toaster, are very inefficient and use huge amounts of battery power. After having a coffeemaker since college days, I'd almost forgotten that you can make coffee the low-tech way by pouring almost-boiling water through coffee grounds in a filter or French press.

Anchoring out does not mean "camping out." Although many of our meals aboard are one-dish soups and stews, we've done some pretty elaborate 4 or 5 course meals, even without electric appliances. Our favorite show-off meal is a cheese souffle. We once made this meal for our good friend and sailing mentor David Kummerle, and this led by a not-too-circuitous route to one of our favorite airport security stories. (Doesn't everyone have at least one?)

David has lived aboard a boat which is the big sister ship to ours for many years in the Virgin Islands. He hosts private learn-to-sail vacations there, where he also serves as gourmet cook. Every year, he visits us for a week sailing in the Chesapeake, and we visit him for a week sailing in the VI. One year when he was visiting, we made our signature souffle, using an old hand-crank eggbeater to whip the egg whites. (How many people have those any more? Where would you even buy one outside of an antique store, now that most cooks have KitchenAid mixers and their ilk?) He was suitably impressed with the final result, and speculated about learning to do this for his charter guests.

So the next time we flew down to visit him, we packed a house gift in our luggage - a beautiful white ceramic souffle dish and an eggbeater. Going through security at BWI was no problem, but somehow, by the time we changed planes in Puerto Rico, something raised a red flag. One screener frowned and called another one over and pointed to something on the monitor while they carried on a discussion too rapid for me to follow with my limited Spanish. Then they asked (in English) if I would mind if they searched my luggage. So while I'm smilingly saying "No, of course, go ahead" I'm thinking "Yikes! What are they seeing?"

Well, it seems the eggbeater showed a puzzling shape in the xray machine. The first screener didn't know what to make of it - is this a weapon? - but another woman working with him snatched it up with a cry of delight and started cranking it in midair. We couldn't make out most of the conversation but I caught one word - abuela (grandmother) - and the body language said it all. She hadn't seen one of these in years, but her grandmother used one to make birthday cakes. Next thing we knew, she had "borrowed" our eggbeater and was in the next screening lane, still madly cranking the air. There was laughter, and they called another woman from yet another lane over.

Finally when traffic had been disrupted for long enough and laughter and reminiscing had died down to a chuckle, a smiling security guard returned our tool and waved us on to our plane. 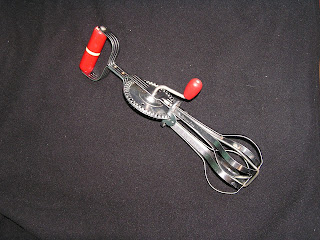