It's the kind of gray and blustery day that can only be warmed by a pot of soup bubbling on the stove. Something spicy and bright-colored, maybe gold or orange. Hmm, pumpkin? curried yellow split pea?

From my favorite writing spot at the nav station I look across to the galley for inspiration. Several boat guests have described it as one of the best laid out galleys they've seen, yet by land standards it's utterly cramped.

In what seems to be a former life, Dan had a kitchen design-remodel business. For most clients, bigger was definitely better, for the small percentage of those who didn't want walls moved, it was about adding bigger appliances, long unbroken sweeps of counter space, maybe an added island or peninsula. In 15 years of the business, no one ever asked us to make their kitchen smaller. Yet our galley measures 4'x6' - about the size of the powder room in our townhouse.

We get our share of "the cobbler's children always go barefoot" jokes about the kitchen designer's tiny floating kitchen, but they miss their target - there are reasons for most of the design anomalies aboard. By land standards, or by the rules of kitchen design, the space between range and sink looks cramped. The kitchen design rules want the space between parallel counters to be 4 feet or wider; here it's a smidge under 2 feet. That narrow space, though, means you can lean against something solid if you're cooking at sea - and a wave can't hurl you across the cabin as it could in a more open plan. The apartment-size stove means I'll never roast a 20-lb turkey, but it's mounted on gimbals to stay level even if we're heeled (leaning sideways) underway.

The fridge is a pair of deep boxes that open from the top rather than the front, so that neither cold air nor food can spill out when it's opened. You can just make out the brass rings that are used for lifting the lids, directly below the spice rack. The boxes are so deep in fact that only 6-foot-tall Dan can reach the bottom of the box when it's time for cleaning and defrosting -- and we could certainly tell stories about the amazing things that were forgotten on the bottom that we rediscover weeks or months later! All the lockers have latches and the shelves have lips to keep things stowed when it gets lumpy out. 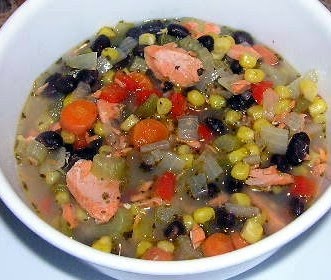 I'm so accustomed to small kitchen appliances, though, that giving them up was the most dramatic adaptation we had to make when moving aboard. I've got so many stories to tell about that adventure that it'll have to be saved for another post. Meanwhile, not to tread on fellow blogger Louise Kirk's territory, dinner turned out to be a fish chowder brightened with carrots, red bell peppers, corn, and black beans.