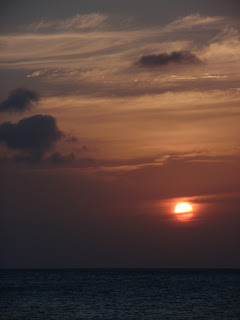 So for Earth Day Dan and I:
Yay me!

Our plan for the following weekend was to have a nice fish dinner Friday evening, then install our solar panels Saturday morning (the clamps had arrived in Friday's mail). The weather was predicted perfect (80s during the day, 60-ish at night, moderate winds) so we'd planned to anchor out in the undeveloped Rhode River where I could do some long-overdue writing after we finished the solar panel project.

The weekend started great. Salmon brushed with some lemon-pepper-garlic oil that friend Melissa had given us at Xmastime, rice medley with portabello mushrooms and cream (NOT from a Campells soup can, either!) and green beans, and a bottle of wine. But then on Saturday morning, the solar panel installation proved to be more complex logistically than we'd expected. So by 3:00 in the afternoon, we had only the first of the two panels up, and no wiring connected.

We decided that finishing the project would be more gratifying than going out for the weekend. And in many ways, staying in our slip is almost as nice as being out. We're paying the upgrade for an "outside" slip directly on Back Creek, with a great unobstructed view of passing boat traffic - and worth every penny of it!
So we stayed in the slip and stayed on the job and, to make a long story short, two trips to the marine supply store, a lot of trial and error, a fair dose of self-doubt, and reading and rereading the instructions, plus two different textbooks on boat systems, and by mid-afternoon Sunday .... success!

One way or another, sailboats have to be their own power company. You can't very well run an extension cord out to the middle of the Atlantic, so you have to be self-sufficient. When power is limited, you get very aware of every usage, and every waste. The refrigerator is our biggest power drain, which didn't seem so surprising. But the fact that the computer was second-largest, was unexpected. I was pretty confident of my calculations for our power use. If the panels lived up to their advertising, and we continued to conserve as we've done in the past, we'd be able to make ALL our power needs on sunny days, until we have 3 cloudy days in a row. The only thing we wouldn't be able to provide is air conditioning. For that, we'd still need shore power. Of course, if we're on the water, its cooler and breezier so perhaps we'll need it less often.

The first couple of days after the installation were warm and sunny, and the panels produced exactly as expected. We were making 100% of our power needs! We were fixated on the battery monitors the way other people are glued to the TV. Our dinner conversation showcased our engineering nerdiness and contained such scintillating gems as, "Hey, babe, did you know that the fridge is using 4 amps when it runs?" and "What does the panel show now?" By Wednesday when the cloudy weather began, we were still able to keep up, but only because the relatively cool water this time of year did not tax the fridge overly much. Of course, now, after a week of steady clouds, we're unable to keep up until we get couple of good sunny days and needing to supplement with shore power. I can't find much fault in the solar panels for that; after this many dreary gray days in a row, I also need a couple of days of good sunshine to perk up my energy level!