When we lived in a house and wanted to socialize with friends, the options were limited: go out somewhere together, or they’d come to our house, or we’d go to theirs. Living on boats, though, we have another option – bring OUR house to THEIR house. I.e., raft up. The biggest boat sets their anchor and the smaller boats tie onto the big boat so people can step easily from one boat to another. Most of the raftups we’ve attended have been fairly mellow – three or four boats getting together to spend an afternoon or overnight socializing. Last weekend our friends Scott and Lisa planned a far more ambitious version of a raftup. Instead of three or four boats, this raft had over twenty by the time the sun went down! [photo] Half a dozen more boats anchored nearby and came over to join the party by dinghy or kayak. 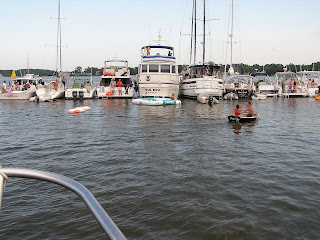 So what do you do when you’re rafted up? Chatting in the cockpit, touring each others’ boats, watching the sunset, maybe some swimming or exploring the shallower parts of the river by dinghy. As in many raftups, we spent the afternoon of this one visiting with folks on their boats – some were marina neighbors we see almost every day, others were new – and swimming in the river. But the mega-scale of this raftup allowed for some creativity. For entertainment, Scott staged blindfolded dinghy races. The person on each boat who was to row was blindfolded; a second person who was not blindfolded told the rower which way to go. Predictably, the result was good-natured chaos. [photo] 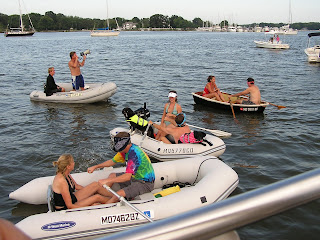 The outsize scale of this raft party continued after dark. Not content to blast music from someone’s ipod, Scott and Lisa hired local band The Geckos. They good-naturedly agreed to play the unusual venue – on the bow of a boat at anchor – which meant ferrying all their equipment and themselves by dinghy. Calm winds and a beautiful sunset contributed to the magic. 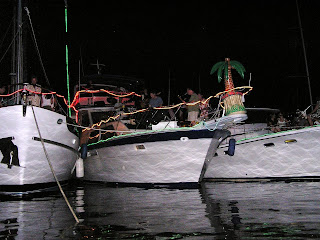 Finally, next day, back toward home. We passed the iconic Thomas Point light [photo] and back to the marina … and back to my last-ever week of work before retirement and full-time cruising. “Work” seems restful by comparison after a hard-to-top weekend like this one! 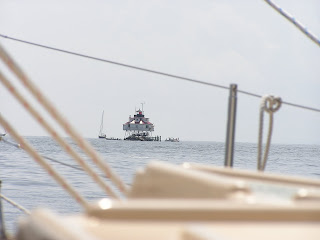