The next day, the seas were still rough after the storm but the day was crisp and clear, and with fair winds we decided to continue south. It was going to be another long day, 40-ish miles, so we started around 8. Or tried to; the docklines had tightened during the storm and by the time we got everything off, it was more like 8:30. We passed Fort Monroe at just exactly 5 PM close enough to hear the bugle, then anchored between the fort and a bridge causeway. I’m new enough at this retirement thing to feel a strange emotional sensation when I’m sitting in the cockpit watching cars stuck in rush hour traffic – I think it’s called “gloating.”
The next day was short, only about 3 hours. But it was interesting navigating Hampton Roads, passing and passed by laden container ships the size of a city block, numerous tugs and barges, and a warship headed out to sea. I’ve never ridden a bicycle on the Beltway at rush hour, but in terms of scale and power, it might feel something like this. We anchored at Hospital Point in Norfolk, at Mile 0 of the intracoastal waterway (ICW). After the adrenaline wore off and we knew the anchor was well-set, we took the dinghy ashore to explore. This is a process that takes about ½ hour since dinghy and motor each weigh a bit more than 100 pounds. It involves lifting the dinghy off the foredeck and lowering it into the water using our windlass, then rowing it to the stern of the boat where its motor is stored. Dan stays in the dinghy to guide the motor; I stay on the boat to lower the motor using a pulley system. We’d been traveling in company with another boat who have done this trip before, James and Ellen are mentoring us on this journey. Since our dinghy was already in the water there was no need to launch theirs; we shared the ride to shore where they sought fresh groceries and we toured the WWII battleship Wisconsin . The scale was even more overwhelming than when we’d passed the active ships on the way in, and I remember odd statistics like 4 acres of teak decks and a complement of 2,600 sailors during one tour. At day’s end, I was equally happy to sit in the cockpit and watch the traffic on the river. 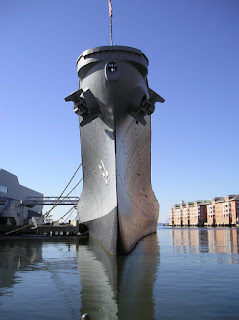 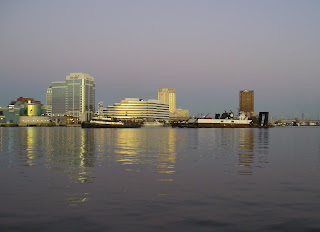 (photos: the formidable bow of the Wisconsin; tug and barge at Norfolk)
Next morning we started the “real” ICW – lots of traffic, more naval vessels, and railroad bridges. After an hour or so we were out of the commercial areas and turned toward the Dismal Swamp Canal (which didn’t look so dismal in the sunshine). Here we went through our first lock. About a dozen boats of various types and sizes motored in to a high-walled shadowy box and tied to the walls and each other under the direction of the lockmaster. No wind or current made it easier, but it was still a bit stressful nestling our home in between a group of other boats and a wall. Then the gates closed. Water was pumped in and we rose to the level of the canal like a boat elevator, and we were at ground level and back in the sunshine. “I’ll tell you when to leave,” said the lockmaster. “I didn’t scratch any of you coming in, and I won’t scratch any going out.” We certainly appreciated the pride he took in his work! We motored out and down the canal single file. Not much work for a navigator to do here. 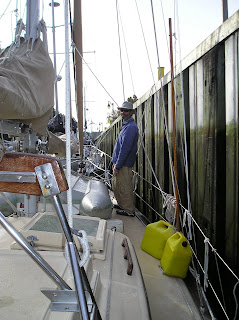 (before locking through - note the high walls) 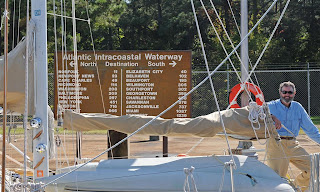 (after: back up at ground level. Photo by James Forsyth) 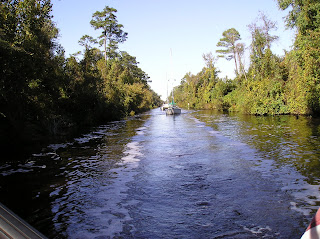