After Northport, the weather forecasts became iffy for boating, so we headed back to Melissa's marina in Charlevoix to do some land-cruising.  Shopping netted us a new glossy black pearl teakettle, a stack of books from what she described as her favorite indy bookstore, a pair of earrings and some art cards. Dinners consisted of local fish and chips, in a different restaurant every night.

And after dinner, cocktails and conversation and sunsets.  Those higher latitudes meant long lingering twilight and on several nights, incredible colors. 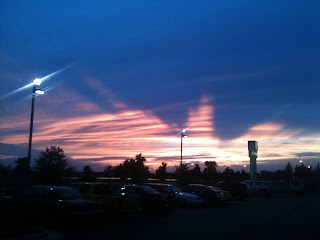 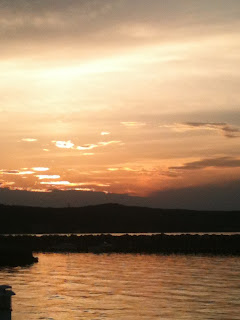 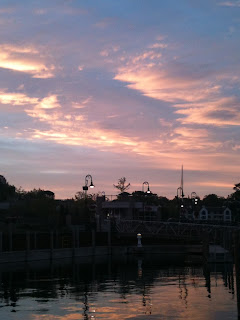 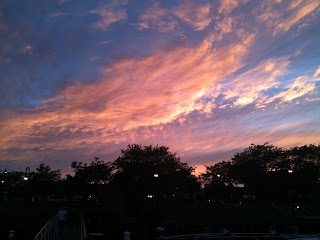 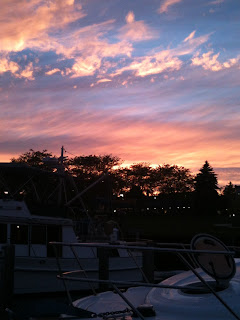 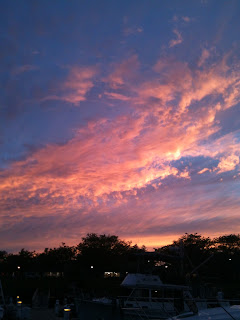 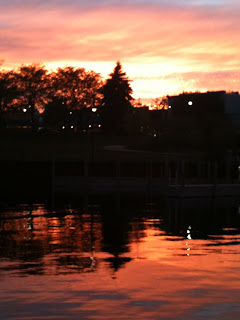 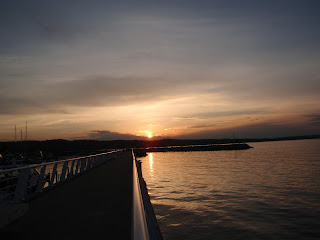 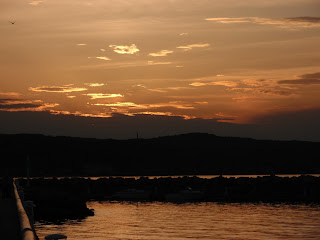 While we were in Charlevoix, we looked at the stone houses by Earl Young. He wasn't trained as an architect, but had an artistic eye and a love of local stone as a building material.  These houses are a local historical landmark (set of landmarks?); here are a few of my favorites.

A day outing with the boat on Lake Charlevoix yielded even more houses:

One way in which living on a boat has definitely changed my viewpoint forever, is the size of house that seems "reasonable" to me -- and it's more like cottage or cabin than palace.
Of course, settling into even the cutest house would mean giving up our life on the boat, and I can't call that a good trade.

But you know, "the rest of the story" wasn't about visiting our favorite nostalgic places.  It wasn't about shopping, or boating, or sunsets, or houses at all.  It was about connecting up with the people that made our time so special...and so memorable.

On the way home we met up with friend Cindy, a former colleague of Dan's.  We'd stayed very loosely in touch via Facebook, but although she knew what I'd had for breakfast that morning, we hadn't had in depth conversations about the big changes in each others' lives, like retirement.

Cindy literally knew what I had had for breakfast that morning, as I had posted something about "farm-fresh omelette where the locals eat, along with a side of sassy waitress" as our final breakfast before leaving northern Michigan.

It wasn't just catching up with old friends, it was our first chance for a physical meeting with online friend, fellow sailor and writer Brian.  For an extra couple of hours driving time -- plus however long it took us to cross the border -- we could detour into Canada where I could put a face to the name behind the funny comments.  We followed his directions to his marina, but then the confusion began.  His blog is named "Dock 6 Chronicles" but did the marina even have a "Dock 6?"

My guess is that you glazed over and scrolled quickly past the sunsets and houses, and slowed down a bit as you got down to this last half-dozen photos.  See?  It really is all about the people!