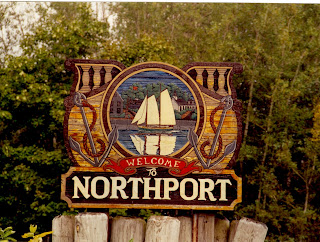 In 2002, we lived in a pretty-but-ordinary house in a suburb of Lansing, Michigan and had medium-stress careers -- Dan as a professor at a community college, me as a supervisor of 25 research scientists.  Every Friday afternoon at 3:00, Dan would show up at my office in an already-packed car and we’d make a quick getaway.  It was a 4-hour drive north to where our sailboat waited patiently on its mooring in front of a boatyard in a small town on Grand Traverse Bay.  Every summer weekend we made the trek, and recharged our mental batteries in this slow-paced, natural haven.  When we weren’t sailing or just relaxing aboard as we bobbed on the gentle waves or swimming in the clear cool water, we were touring the surrounding cherry orchards or vineyards or the historic lighthouse.

Our haven was the little town of Northport, Michigan, latitude 45 degrees, 21 minutes north – closer to the North Pole than the equator.  It’s a quiet town of only 600 permanent residents, with a small-town- America vibe, a grocery store, a liquor store, a hardware store, a couple of shops and restaurants, a marina and a boatyard.  It’s still the hailing port painted on our stern, and we remember it fondly.  We had heard vague news of it over the years; that its business had declined, it shrunk even more and almost vanished, then slowly began to recover as artists “discovered” it, but circumstances hadn't lined up for us to visit again after we left 11 years ago.

Until last month.  Our good friend and fellow boater Melissa has a pretty nice life - a house in Florida where she spends the winter, and a boat in the Great Lakes where she lives aboard in the summer.  This summer she was going to be exploring our old stomping grounds in northern Lake Michigan and invited us to join her on her boat for a week.  Brand new places to explore for her; a bit of a nostaligia tour for me.

Some things were as we remembered them; others were changed, evolved in unexpected directions.
====


We met Melissa in the charming town of Charlevoix
A fair amount of wine and lots of catching up filled the evening, then next morning we were underway.  Melissa's a former sailor who traded for a powerboat; I couldn't get used to the idea that a "good boating day" was flat calm, without the wind that we need to keep our sailboat moving.  Nor could I get used to the speeds she took for granted.  (On the other hand, with those white canvas triangles (sails) we have, the cost of fuel is not nearly as much of an issue for us as it is for her.  Tradeoffs, tradeoffs.)


Our first stop was the vibrant “big city” of Traverse City, 45 minutes by car or 3 hours by boat. We remembered it as a tourist town; it has lots of recreation and cultural opportunities and is influenced by 2 colleges.  The main street had some shops and pubs that we remembered and some intriguing new additions.  We checked them all out and definitely made our contributions to the local economy.


After eating, drinking, and shopping our fill, we headed for Northport.  I wasn't sure what to expect. Along the way, we passed forlorn "Gull Island."

Finally we came to the town of Northport, nestled in a curve of the hills.

We pulled into the marina and settled in behind a newly-expanded breakwall.  The marina had gotten a major upgrade, new seawall and bathhouse, and was lovely, though almost unrecognizeable.  Directly in front of our bow was a farmer's market that seemed to consist almost exclusively of cherry products.  Our lunch consisted of freshly-baked cherry scones, then we picked up several bags of dried cherries for later.  There was cherry juice, cherry jam, cherry wine, even cherry salsa and a guy selling lovely wooden cutting boards and bowls made from ... you guessed it ... cherry wood.

Next, we went for a walk around town.  Of course, we needed a photo in front of the first "Northport, Michigan" sign we found, which Melissa graciously snapped.


We noticed many art studios and new shops.  We walked the half-mile or so to our old boatyard.  The walk seemed much shorter than it had 11 years ago; maybe its because we're used to walking those kinds of distances now that we're living on the boat and traveling full time.  Or maybe its because there were a bunch of new cottages filling what used to be wooded area along the road.  Hmmm...  Anyway, the good folks at the boatyard remembered us, and we spent an hour or so chatting and exchanging news: they bought out the boatyard next door; this guy retired and that one was still driving his meticulously-restored shiny red 1966 Mustang around town; the guy who kept his century-old wooden boat on the mooring next to ours moved to New England; and many more tidbits.

When we got back to the boat and settled in for the evening with some cocktails, I was still on my nostalgic high.  "I could come back here..." I mused.  "What?!! Are you crazy?" burst from both Melissa and Dan at the same instant.  "Nice place to visit ... but why would you want to live here?  What would you do?  You'd be bored in a week!  And that's during summer!  There's nothing here!"

And when I stopped seeing what I remembered, and started seeing what was really there, I realized they were right.  There's such a thin line between restful and suffocating.  I didn't need undiluted calm, quiet relaxation, now that I no longer had a stressful job to need a break from.   I didn't need the comfortable everyone-knows-everyone-and-looks-out-for-each-other familiarity of a small town when I had the ongoing community of cruising liveaboard boaters for support, online and in physical "real life." I could go home again  ... that is, I could bring my body back to this place ... but I wasn't the person who fit there anymore.  That sounds sad, but it isn't; the baby bird doesn't fit back into the egg, either.

We had more adventures and a few more pictures, but this post is long enough, so I'll save them for Part II.