After the strong winds that ushered in November, came frosty cold nights.  Clear and beautiful for stargazing, but also a reminder that even South Carolina wasn't far south enough to be immune to what was forecast to be a harsh winter.  We began looking for a weather window to sail south through Georgia and into Florida.


We faced a decision.  If we stayed in the ICW, we would be winding through the marshes of Georgia.  Open and beautiful, we could anchor in the marsh grasses at night and sleep, and look at the stars.  The downside would be that we would have to time each day's travel to cross the numerous shoals at high tide, and deal with sometimes strong currents.  This route was 250 miles long; at our cruising speed of 5.5 - 6.0 knots would spread over about 40 hours, probably 6 travel days.  Our alternative was to sail overnight offshore, a straight line. about 200 miles nonstop, reenter the ICW at Fernandina Beach or Jacksonville, and arrive in St Augustine as soon as midday the following day.

The weather was excellent for a Tuesday pre-dawn departure, which also coincided with high slack tide -- very easy to depart the marina and granting us a fair-current boost for the first part of the trip whether we chose to go inside or outside.  There were also predicted mild winds and a near-full moon, near-perfect conditions for an outside overnight sail.  If the autopilot was fixed.  It was an intermittent problem, the hardest type to diagnose. It would be operating fine, then suddenly begin turning in aimless circles. not good.  Conversations with Raymarine tech support and investigation with our volt-ohm meter identified a broken compass.  The compass had been replaced, though it was not clear whether that would completely solve the problem.  If not, we had little choice but to stay in the ICW.  Hand-steering overnight for 30 hours straight would be absolutely exhausting even in the mildest weather.

The horse scents the barn, traditional knowledge states, and speeds up just to get home and be done with it.  And so too, it seemed, with us and our boat. We opted to try for the outside overnight route.  Both routes started with a run down Port Royal Sound before they diverged, so we had several hours before we reached the decision point.  We would test the repaired autopilot while we were still in the sound, before we committed to the outside ocean passage.  If it worked satisfactorily, we'd sail overnight, otherwise we'd turn off and take the slower inside route.

The compass worked fine in our tests, so we bypassed the turnoff to the ICW and headed out to sea.  We were alone, all the other boats stayed inside.  But not really alone, we were escorted by a couple of dolphins for a short stretch.  Then, nothing and no one.  We saw some bigger shipping off Tybee Roads (the entrance to Savannah), but they were easy to avoid.  Interestingly, this was the first time we'd ever crossed that area in daylight; all our other outside runs had us passing Savannah at 2 or 3 AM.  It was a lot less threatening to be able to actually see the other ships, instead of just a confusing collection of lights in the night. The seas were still 2-4 feet on our beam and quarter, leftovers from the previous weekend's gale, but the pressure of the wind in our sails kept the boat stable in a pleasant roll.  The fair current was phenomenal; we had, we suspected, caught a little spinoff eddy from the Gulf Stream and we were making far better time than expected.  We passed the time alternately in cheerful conversation or quiet introspection, enjoying the travel but at the same time anxious to settle down in one place for a while.

The afternoon wore on and the autopilot continued to work perfectly.  Unfortunately, the winds softened and were no longer sufficient to hold us against the seas.  Every wave rolled us first to the right, then to the left as it passed underneath us, hissing as it then continued on its way to the horizon. Although we had secured the cabin for sea, things below fell to the floor or slid around; things that were in lockers banged about inside against the doors.  We had a boatful of delicious food, but our meals were dreary -- lunch was a quick packet of ramen noodles in an oversize soup bowl to allow freeboard for sloshing, and our dinner was scheduled to be a dry cheese sandwich, that required no cooking and could be eaten with one hand while we held onto the railing with the other.   "This sucks!" I screamed to Dan.  "Let's never do this again!"  "Okay, I understand," he replied, looking wistfully at the horizon.

The sun slid down toward the west and the high light clouds turned cream-colored, then progressed through the spectrum to yellow, gold, and orange, the color reflected in the ocean not in shimmering rivers but in pieces tossed and broken in the waves. "Dolphin alert, starboard beam!" I called to Dan as one of the delightful mammals arced in the near distance.  Then another made its appearance, and another, and suddenly they were everywhere, maybe two dozen dolphins of various sizes, arcing and zigzagging all around a patch of ocean between us and the sunset.  One or two jumped completely out of the water, suspended against the glowing sky, a comma of inexpressible joy.  What brought them all together?  We had seen none all day since we left the sound, then this many all at once in the same place.  Maybe they were celebrating a dolphin birth or wedding, or the pretty sunset, or simply the conclusion of another day of freedom. The sun sank below the horizon, sparking a small but definite green flash.  A couple of dolphins swam alongside our boat for a minute, then left.  Maybe they wanted to race, but once they figured out that they could easily outrun us decided a race wouldn't be any fun, or maybe they were just politely acknowledging our existence ("Poor humans, they only get to visit the top skin of the ocean confined to that plastic shell of a boat, while we dolphins can glory in all of the depths.")   Then just as suddenly as they had appeared, the dolphins were gone, leaving us alone with the magenta afterglow of the sunset, and the full moon already risen on the opposite horizon. 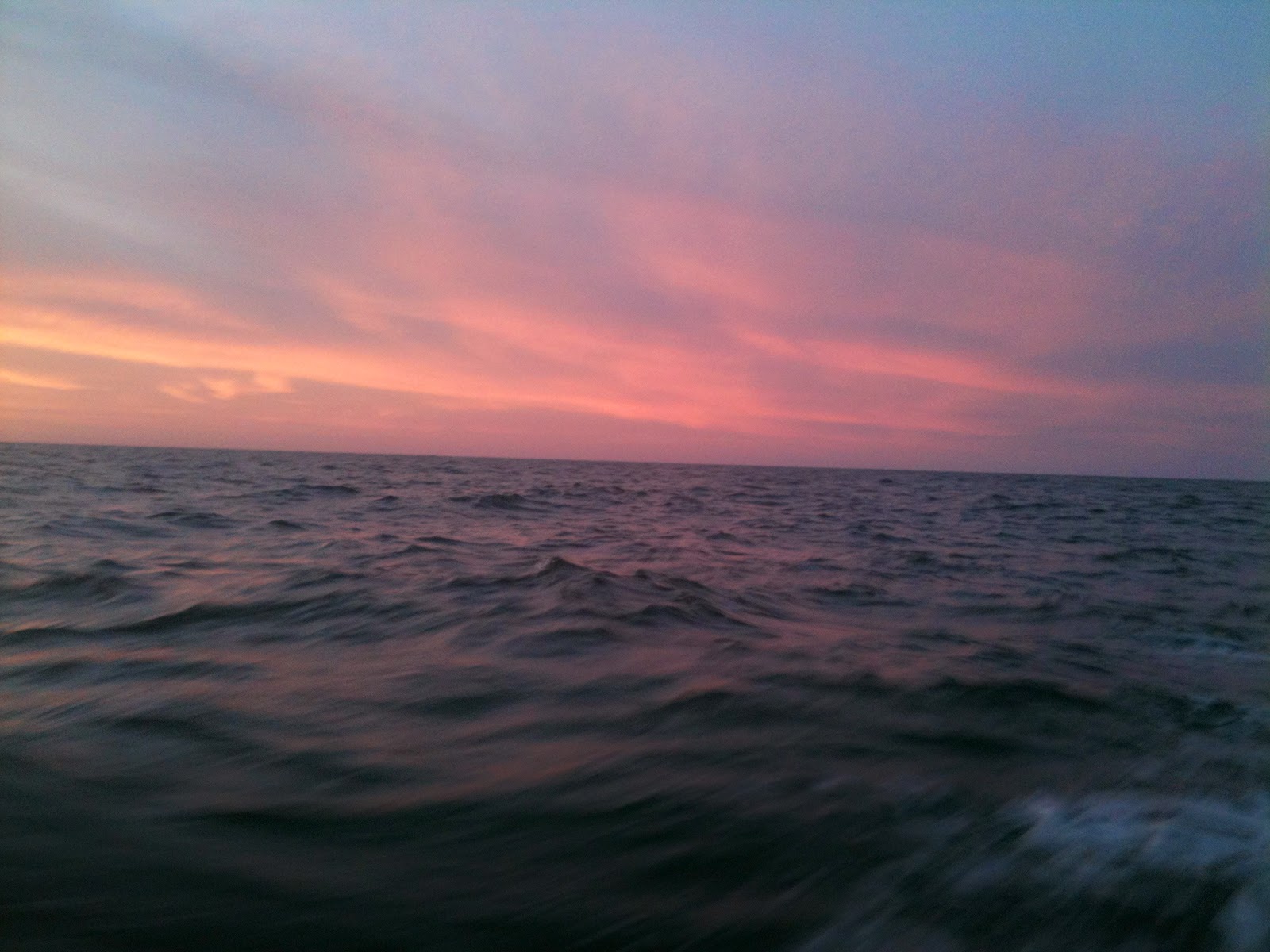 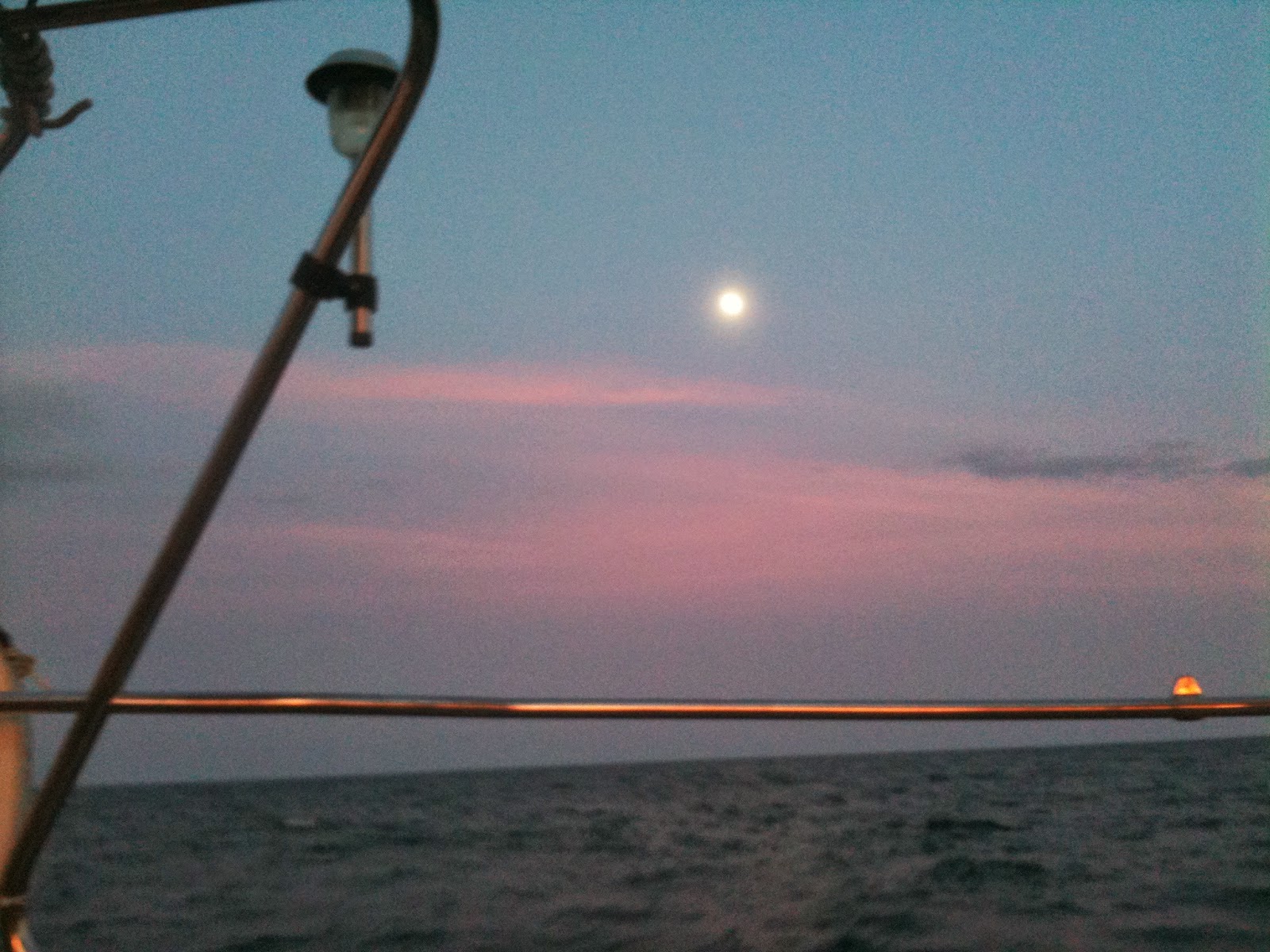 We reached the entry to Fernandina Beach about 2 AM.  We didn't like the idea of arriving in an unfamiliar harbor, even a well-lit one, in the dark, and there was no sense in just hanging out in the lumpy rolly ocean waiting for daylight,  If we were going to be uncomfortable anyway, we might just as well make further progress southward.  So we continued toward Jacksonville, slowing down our speed a bit so as to arrive near first light/  We had a bit of a balancing act: arrive too early, and we'd be waiting around to enter until it was no longer dark, but arrive too late and we'd miss the fair tidal current.  There were a few places along this stretch of the river where the current could be as much as 4 knots against us, and one bridge where the current was 6 knots.  Since we could only motor at 6 knots, if we missed the tide we would simply have to wait several hours for the next one.


Even the longest nights and roughest passages end eventually, and this one did just as we reached the sea buoy marking the entrance to the St John's River at Jacksonville.  The day dawned grey and gloomy, but the seas quickly calmed once we were inside the protective jetties.  It was tempting to just stop and anchor and sleep, but fair currents were giving us a 2-knot boost and whisking us forward. With only 30-odd miles to go, these currents would have us to St Augustine by lunchtime, so we decided to press on.  There was perhaps a bit of triumph in my voice as I hailed the Bridge of Lions and the municipal marina shortly after noon.  Home!