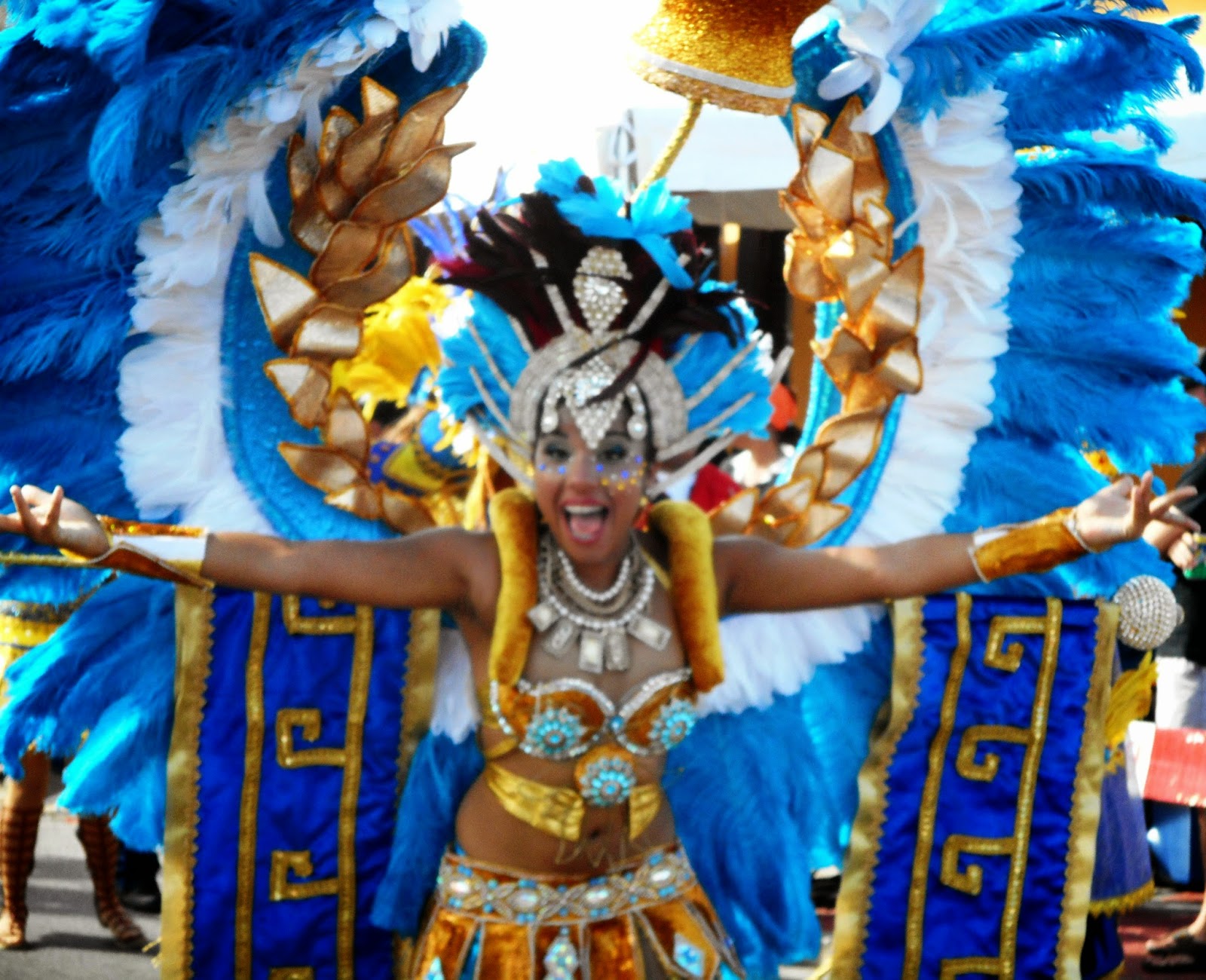 My dad used to say that he liked living in the Northeast because he liked having four seasons, and couldn't quite identify with us heading for the tropics.  "But we have seasons, Dad!" I told him, "Hurricane season, tourist season, Carnaval season ..."

Carnaval.  Biggest island-wide party ever.  The origin is in that last self-indulgent fling in the pleasures of the flesh before Lent.  On Aruba it is a season that lasts for weeks of beauty pageants and music competitions and parades and costumes and we love it.  No half-way measures here -- if this was to be people's last fling then by gosh they were going to make it a good one!

I can't fully convey the atmosphere of the Grand Parade.  It's not just watching a parade pass.  For one thing, it takes hours and includes thousands of people.  It's an all-day party, and we were ready to join.  We packed our rental car with snacks, water bottles, cameras, and sunscreen and drove east.  Road closures and congestion started while we were still a good ways away, so we parked in the shade of a tree and continued on foot.

The luckier spectators were in tents and awnings along the sides of the route.  Others had claimed spots with the ubiquitous cheap white plastic chairs.  Whole extended families were there in groups, although the crowd slightly favored the very old and the very young; a sizeable proportion of the able-bodied were absent because they were in the parade.  First came what we called the parade-before-the-parade, as people strolled the shut-down street catching up with friends who were standing along the parade route waiting for the main event to begin.  A "target-rich environment" for peoplewatchers like us.  Vendors pushed their carts as well, selling ice cream and pizza and silly string for the kids and giant straw sombreros for folks who had forgotten their sun umbrellas.

We walked down the closed-off street with the crowd, looking for a spot we remembered from a past year, a partly-shaded curb at the parking lot of a bank building with a nice breeze from behind.  We had no sooner settled there than a stranger came over to us.  She and her family had the tent across the street, there was plenty of extra space, would we like to join them?

Well, um, yes! Every word we had heard about the openness and generosity of the Arubian people was proved true. She sent one of the men to get some extra white plastic chairs for us and settled us in.  We shared the juice and nuts we had brought, they shared chips and soda from their cooler.  Except for two women named Lilian and Sylvia, their names were unfamiliar and hard for us to understand over the loud music.  But we were able to exchange stories -- they were as fascinated by the rootlessness of our life on a sailboat as we were of their living their entire lives on a 19-mile-long island.

The parade was a series of groups.  Each group had a particular local band and theme.  Semi trucks pulled custom platforms designed as mobile band stages.  An array of huge speakers was attached to the front and back of each truck.  The music was loud -- you could hear it from blocks away, and when each truck got close, I could feel the bass notes vibrating my lungs.  Foam earplugs were a must.   Before and behind the truck were floats, and people elaborately costumed in feathers and sequins that glittered in the sunlight, in very fanciful interpretations of the theme.  The more adventurous -- and sturdier -- participants carried shoulder pieces (costume embellishments like wings or other fantasies, meant to be carried on the shoulders) or head pieces, or pushed road pieces.  After the last costumed group went past, there was one last band truck and spectators were invited to fall in behind this one and join the parade.

I loved that people of all shapes and ages were represented, not just the buffed and beautiful.  And everyone was having fun with this, and so willing to share that joy with all of the spectators.  When they saw our cameras, people would step out of their loose parade ranks to pose for us.  They seemed delighted by our delight in their costumes.

We marveled at the energy that went into the event.  The parade route was several miles long, it was a bright hot sunny day, and these people weren't just walking, they were dancing.  For hours on end.  In many cases with heavy costume pieces on their heads.  I even saw many women in sparkly stiletto heels, that I would find a challenge just to walk in.  I can't imagine dancing, in two parades, in two days back-to-back.  No wonder the day after Carnaval is a national holiday nicknamed "Burn-out Monday!" 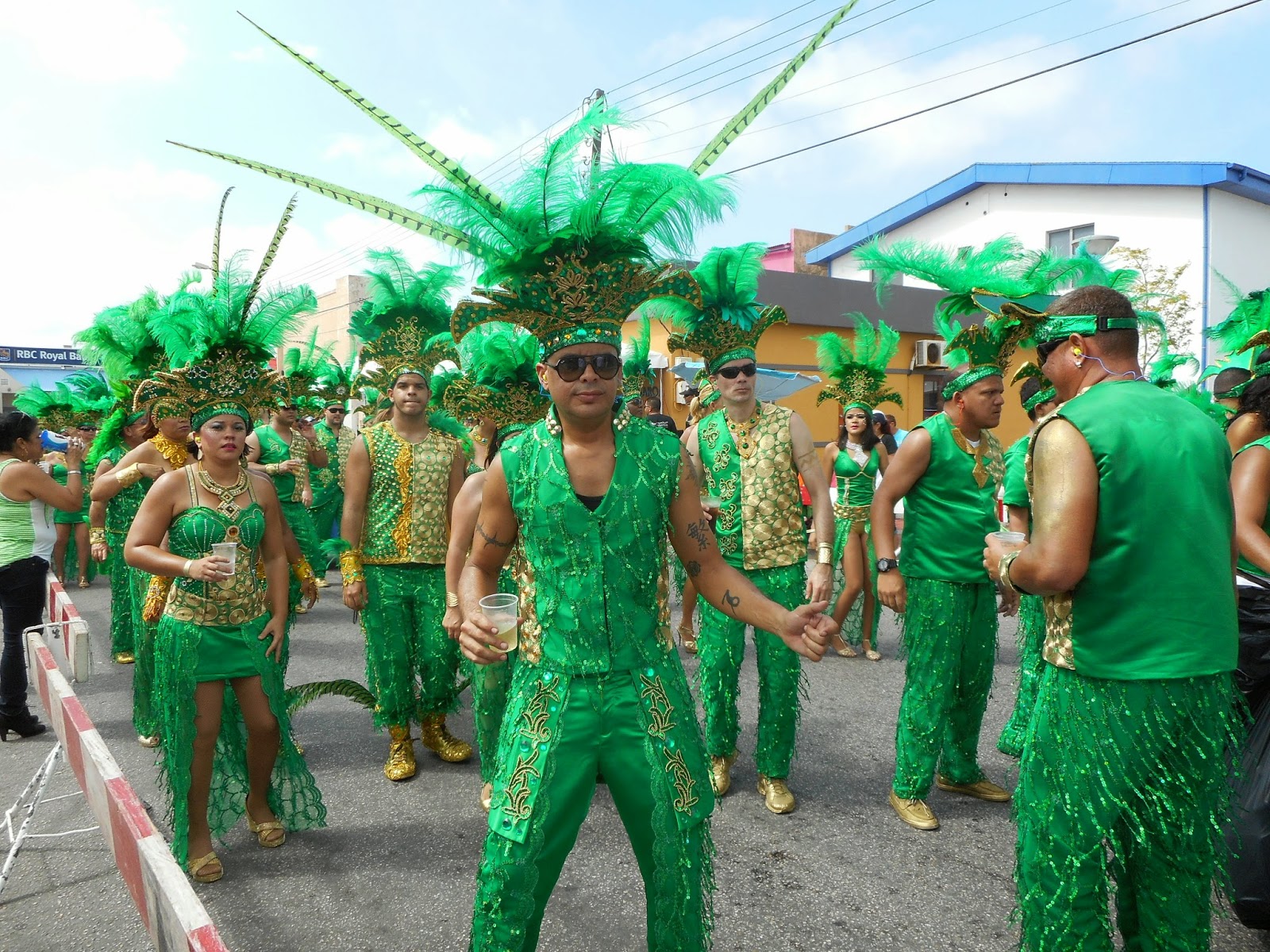 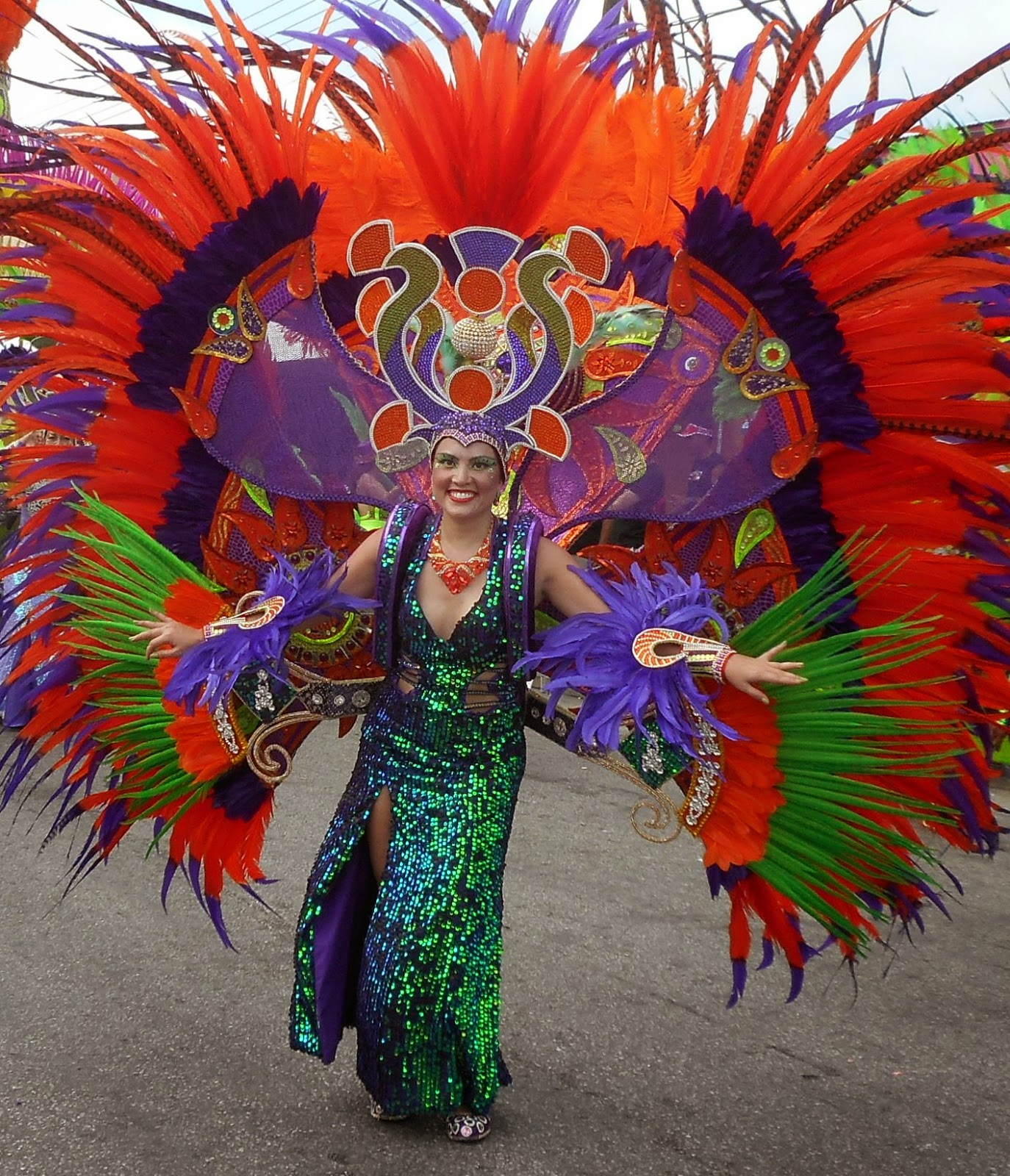 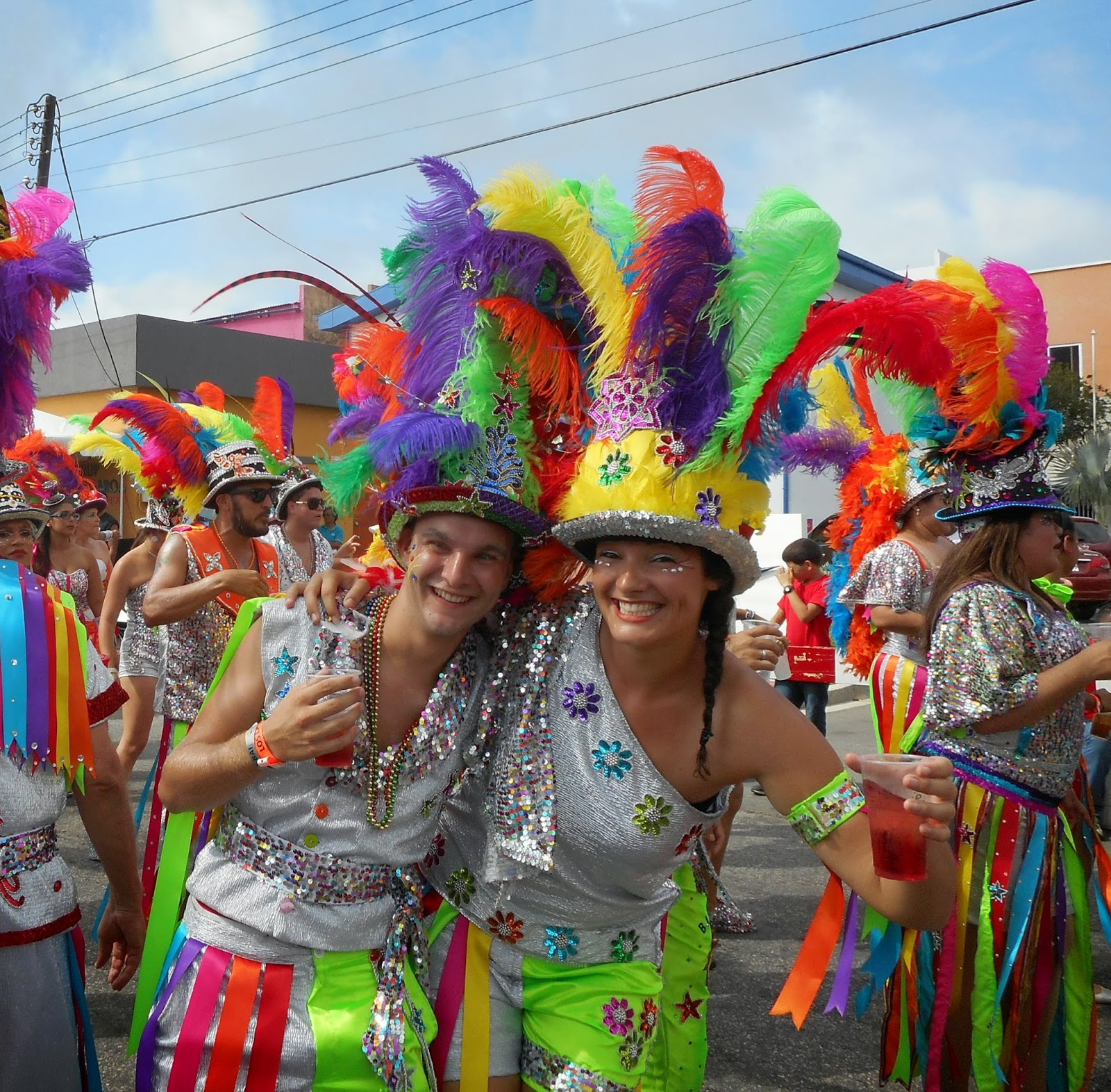 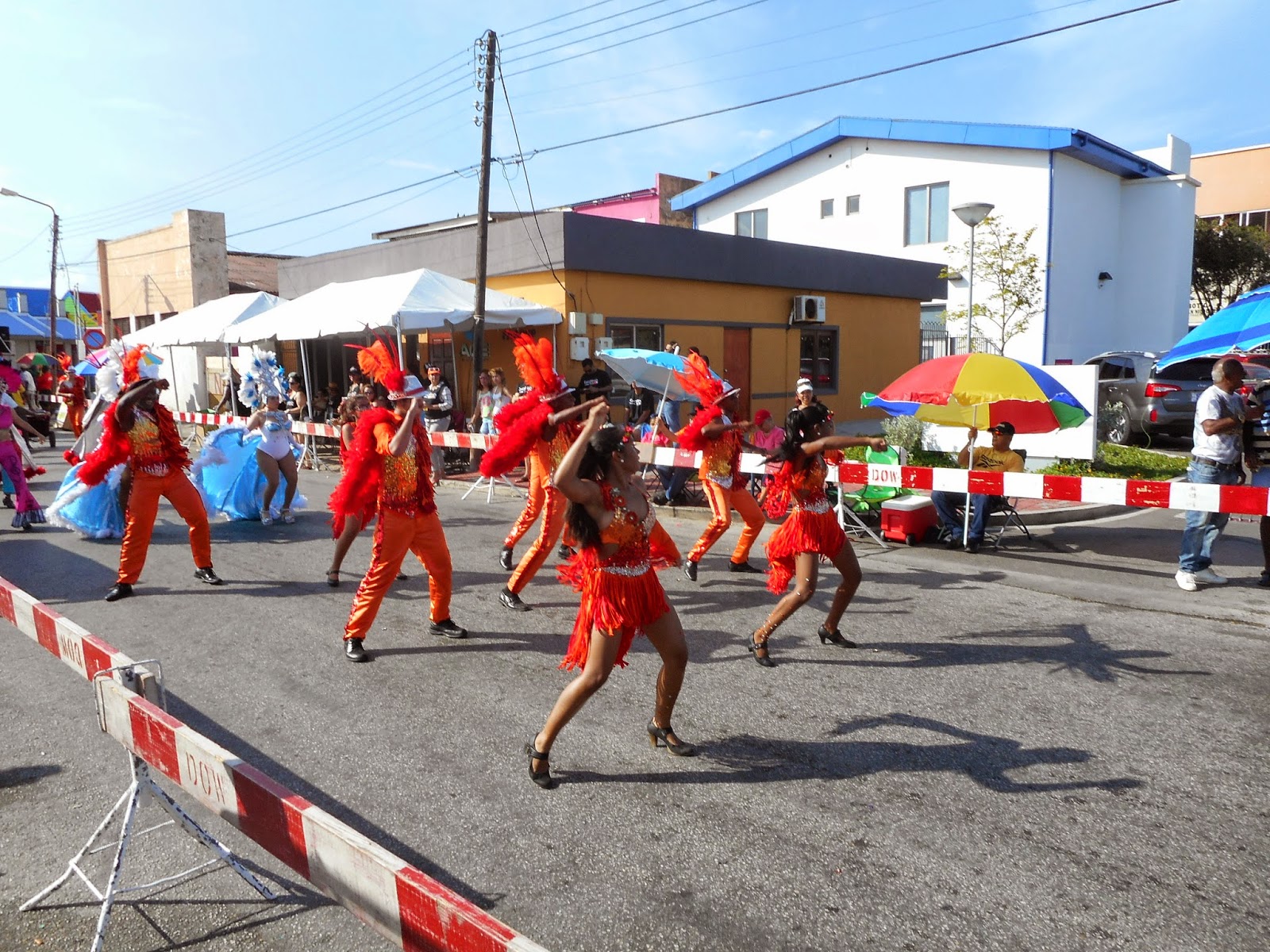 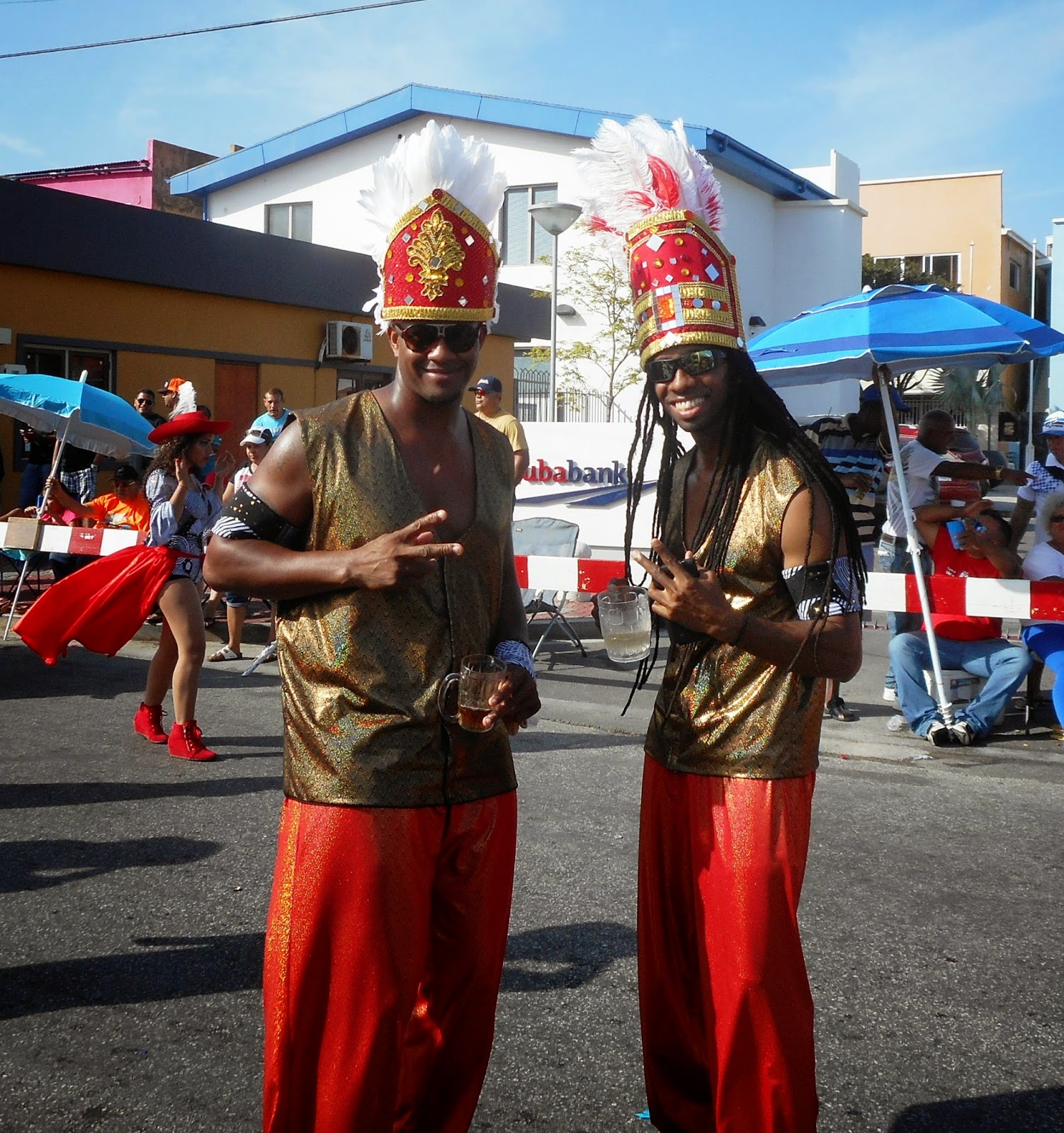 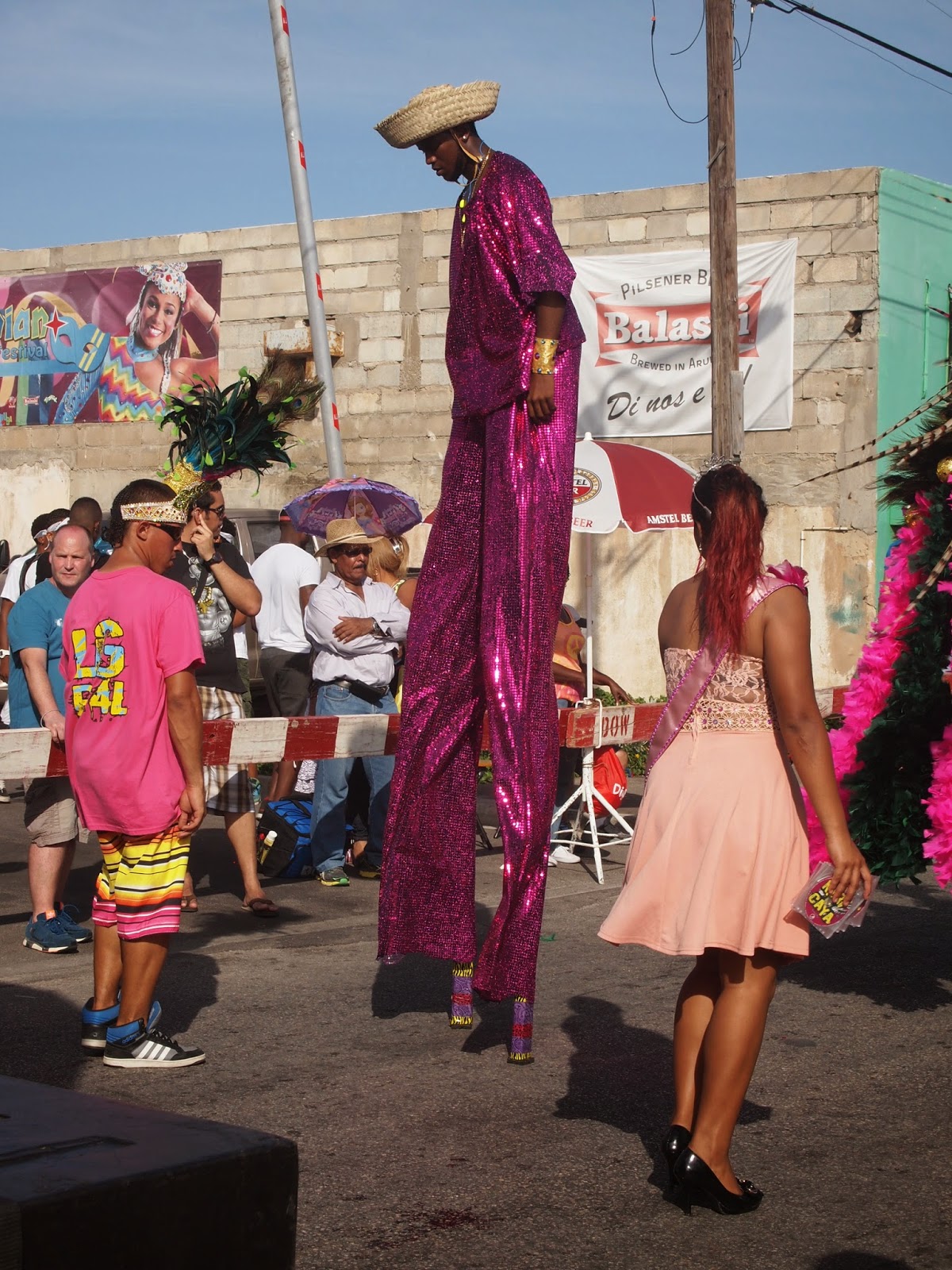 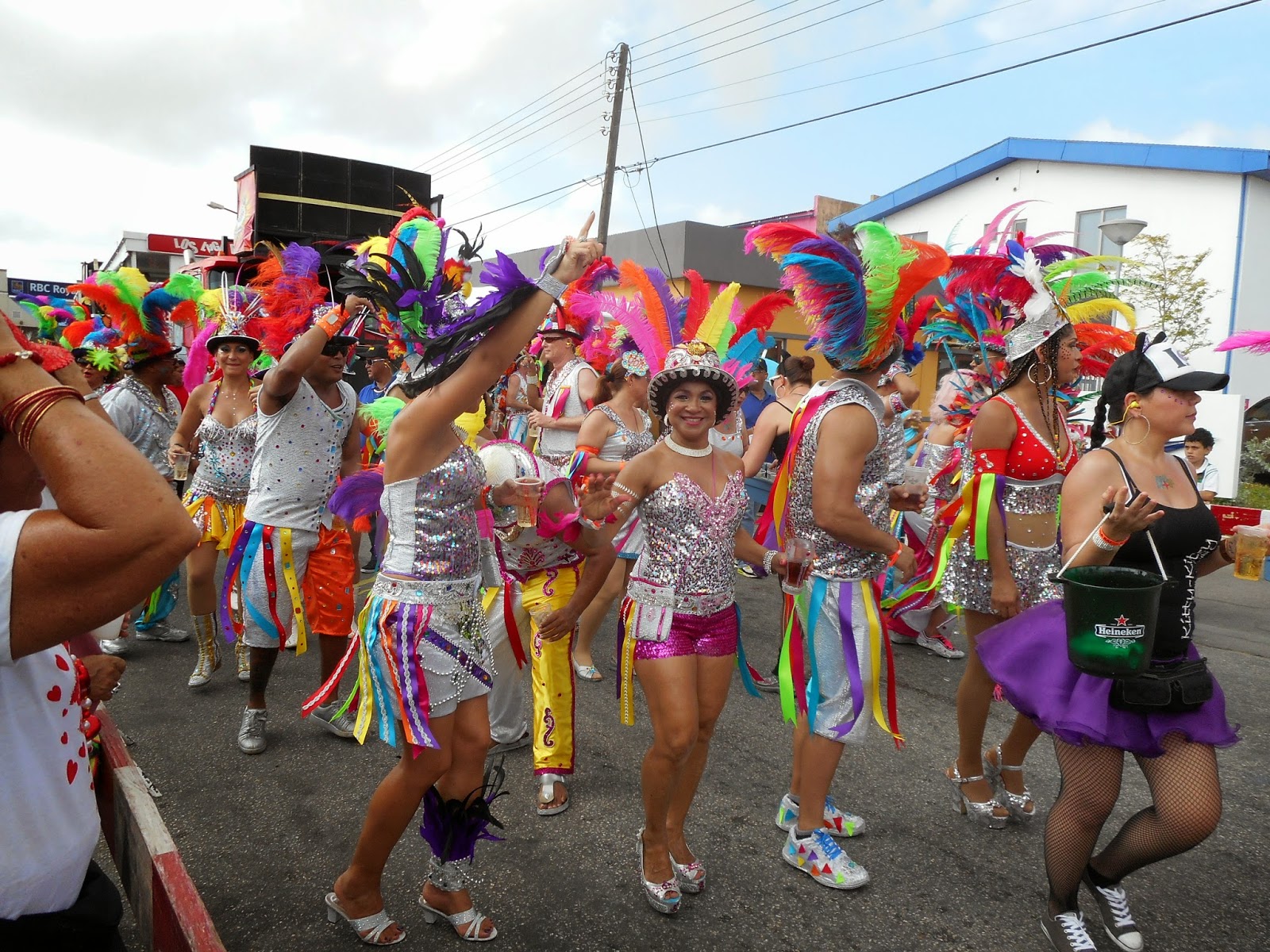