Layers -- Two Ships in One

We've spent most of the spring working as tourguides on the historic Spanish tallship docked here in St Augustine (and now, increasingly, Dan doing carpentry and Jaye doing a bit of cooking). One evening when the clouds were just right and the sky promised to light up with a wonderful array of colors and textures, we invited our friend Karen, the El Galeon photographer, for a dinghy ride to make some photos of the ship from the water with the sunset behind.  On some of my pictures, I exposed for the flaming orange sky.  When I did that, you couldn't really see the ship, it was just a featureless black outline.  (But the extraordinary colors gave me a lot of "likes" when I posted the picture on Facebook.)


On other pictures, I exposed for the detail of the ship, and while still pretty, the sky became a washed-out caricature of the reason we were out there.  That's the nature, and limitation, of photography.  You can capture one or the other, but not both at the same time.  How could I communicate the wonderful sunset I saw to you?  The beautiful juxtaposition would remain only in my mind. Or, since I'm trying to learn some colored pencil art, maybe I could draw it. 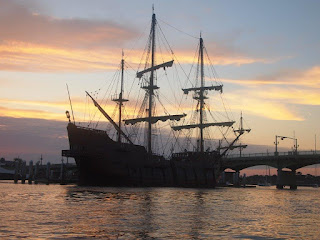 Then a few days later I saw Karen's photo -- wow!  She was able to show both, the sky and the ship, in one photo.   Karen explained to me that there are actually two photos, two layers here, one exposed for the sky, and one for the ship, that are superimposed

I have been thinking and thinking about this photo.  To me, it is an allegory for the replica ship itself, there are two ships in one -- two layers representing the two times, historic and modern, superimposed.

The historic galleon is one layer, with Dan and me dressed in our historic costumes of the time of the ship, telling the stories of the old settlers and sailors, the uncomfortable conditions they endured in their determination to make a new colony across the ocean.

The modern ship and crew is the second layer. The modern crew, works on ship made of fiberglass clad with wood, with sextants and astrolabes on display and GPS and autopilot tucked away behind the door to the bridge. They have their own stories shared with visitors during the day, and in quiet conversations among ourselves on the cutwater deck after hours.  They talk of families and friends back in Spain and of earning sea time for future careers in the merchant marine and of the problems finding good jobs at home, and when they leave the historic tall ship after their six months they return to the 21st century and go on to serve on modern high speed ferries or container ships.

In order to make the best photograph, two exposures, one for the light and one for the dark, must be combined and overlaid into one.  The special magic of El Galeon, or presumably any replica, is in the overlap and interplay of the stories of the ship and crew both historic and modern.

The ship leaves next week for a two-month multi-city US East Coast tour, and we're going along, so as my brain flickers back and forth between the 17th and 21st centuries, we'll have plenty of opportunities for learning.  Stay tuned!