Starting to Feel Real (Four Catch-Up Posts in One)

Over the last few weeks we've been getting more and more involved, often spending as much as 6 days a week at the Galeon doing carpentry, cooking, and standing in the sun talking with visitors. We've been spending more and more time behind the scenes, and feeling more and more like crew instead of city volunteers or members of the extended Galeon "family."  Photo highlights, because not all our friends and family are on Facebook some of these are repeats.

Joining the Crew: One day Fernando (the ranking person on board in the captain and first officer's absence) came over to Dan and was chatting away oddly about nothing in particular.  This actually went on for a while until Dan finally had one of those disorienting moments; Fernando's bright shiny name tag read "Dan Lunsford."  It had the logo on the left, and the flag on the right, and, yup, right there under the name it said crew.  Crew!  I had about the same experience.  He was as delighted to give us the news as we were to receive it. We were official.


No Limits:  During the A to Z blog challenge in April I posted that as soon as my back stopped giving me reminders of its existence I was going to try to climb the rigging to the crows nest on the main mast.  May 29th was "no limits" day when with the help of a friend in the crew who sometimes had to give my uncooperative right leg a little boost, and another friend who preceded us, I went up, becoming, I believe, the oldest woman to have done it.

I thought they were indulging me, since I really wasn't going up to perform any task of value to the ship and in fact it took some time away from other things, but it was a very slow afternoon and the few visitors who were there seemed to appreciate the demo.  I came down to a round of applause. There were lots of high-fives, more as though I'd passed some kind of initiation test joining the crew that everyone had been wondering when I'd get around to, than the sense that I'd wasted anyone's time to accompany me. This is a generous culture.

Ummmm... what are we getting ourselves into?

"It's starting to feel real." I posted on my Life Afloat page on Facebook. "Saturday we brought our passports and sailing c.v. to be scanned and emailed to Spain; they particularly liked the certificates showing we'd completed Coast Guard coastal navigation courses. This morning we each stowed two small duffles of clothing and other items on the required equipment list (foul-weather gear, headlamp/flashlight, knife, ...) on what will become our bunks next week. Then a very thorough bilingual tour throughout the ship, briefing on the "fire plan." My homework for this week is to memorize a rather ominous list of words that I hope never to use, because in an emergency there may not be time to translate: fuego (fire), hombre al agua (man overboard), and abandono del buque (abandon ship). Oh, and BTW, the photo is an aro salvavidas, I now know."

The tour also included explanation of some of the mysterious stylized pictographs located strategically throughout the ship.  A red semi-circle with legs that looks a bit like it might be warning of a cockroach-infested area is in fact the location of an alarm button, and a hieroglyph that could show the route to make a left turn through a roundabout is a firefighting water hose.  Sheesh!

And just 'cuz I know you want to know how we're going to live, here's Dan sitting on his bunk.  In the photo book about the Galeon that we offer for sale to visitors, this area looks bright and cheerful and completely orderly.  It's kind of like looking at model home pictures on the internet; everything is perfect and rather sterile.  But the reality has a little more ... um, call it ... personality:

And the inside of mine, the only private space I'll have for the next two months: 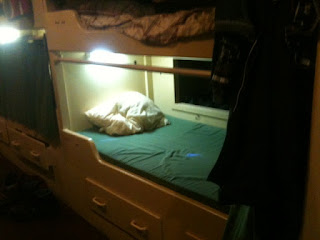 I think I'm ready for this.  A lot of things about group living will take some time to get used to; others are common sense.  For example, one shipboard rule is that you do not use an alarm clock, since that would wake up everyone in the area.  Instead, you post your name and the time you want to be awakened on a chalkboard in the galley, and the person on night watch will wake you at the time you requested.  Your name is posted outside your bunk in masking tape so they can tell who's who even with the curtains closed.

The first leg of our journey:

Was a "ride" from the slip to the fuel dock.  On Cinderella, this is kind of a necessary evil and I time it for slack tide whenever possible. Then, we came and went unassisted in our own slip, or with a single dockhand coming into a new place and then leaving on our own.  But on the Galeon, oh, my, the sense of scale is totally different.  For one thing, every single crew member who wasn't in the engine room had a designated place to be, and a specific job to do.  Dan's and mine was to stand on the main deck and position the "defensas" (fenders) to protect the ribs at the side of the boat from touching the dock.  Of course on our boat the fenders are the size of a small pillow, but on the Galeon they were probably 3 feet in diameter and heavy.  Turns out, our help with the "defensas" wasn't needed; we touched down as gently as a leaf falling in autumn and began the job of tying up.

Monkey's Fist!
And speaking of sense of scale, some of the docklines are almost as big around as my wrist.  So, here you are standing on the dock trying to toss one end of a big thick line to someone twenty feet away -- or twenty feet up.  How's that going to happen?  Answer: use a messenger line and an old-style helper knot called a monkey fist that would have been very appropriate to the Galeon's period.  The messenger line is a thin, easy-to-handle line with a weight at the end to make it easier to throw and to catch.  The weight is the monkey fist -- a heavy, round knot the size of a tennis ball.  The other end of the messenger line is attached to the big heavy dock line.  So you only have to throw the monkey fist, and when the sailor catches it, s/he pulls in the light line, which then pulls in the big heavy dock line.  Simple and elegant solution, and for all our docklines only one throw fell short, one time.  Here there is nothing to give you a sense of scale for these messenger lines with monkey fists lying on the dock.  But the one on the top, the messenger line is about as big as Cinderella's dock lines! 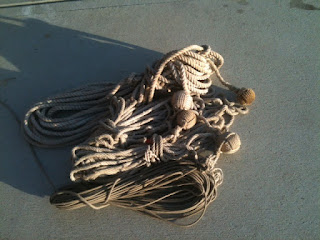 Departure Day:
The weather was perfect and the crew was excited; departure was planned for high tide this morning (11:00).  Here's a photo from the dock, getting ready to leave for Philadelphia.  Again the sense of scale overwhelms me; I can't fit the whole ship in, from this close it towers above us, and every single crew member is standing at the position they were assigned at the briefing, getting ready to take a line.  This leg of the trip, disappointingly, we could not join them.

Back when the US was a new country, Congress passed a law to help protect our then-fledgling transportation industry from foreign competition, that morphed into the "Jones Act." The short explanation is that only US-built, US-flagged vessels can carry goods and passengers between US cities.  Nowadays you see it more commonly in airplanes; only domestic airlines can operate between cities within the country.  But the law still exists and applies to the Spanish-built, Spanish-flagged Galeon.  But we're not passengers, right?  We're crew.  How to prove that, and the documentation required, is left to the discretion of each individual DHS office.  Florida is known to be very rigid in their requirements, so finally, reluctantly, we all gave up the idea of sailing and plan instead to drive to Philadelphia to meet the ship at the tallship festival.  We've been told that at New York and north, we can sail.  And more to the point, outside of the US -- like on the trip back across the Atlantic to Spain -- the law doesn't apply and we're welcome to join.  Ha!  I've sailed up and down the US coast before; it's the ocean passage I'm interested in! And that one has no restrictions!

Even though we weren't sailing, (yet!!) we had another job on this departure.  About 3 weeks prior, the Galeon had been hit by lightning and that had damaged many of the ship's electronics.  Everything had been repaired, but the autopilot needed to be recalibrated ... and that's a story for another post.