Blogging from A to Z: J is for the Joneses

During the month of April last year, I participated in the A to Z Blogging Challenge - one alphabet-themed post per day (except Sundays).  I had such a good time with it that I'm doing it again this year.  I'm loosely organized on the theme of downsizing, minimalism, and small-home living that I've learned in 14 years of living on a small boat.  I'm starting with A is for Anchoring Out, Anger-ing Out, and ending with Z is for Zout and Zwarte Peper (Dutch for salt and black pepper). Click on the A to Z logo on the lower left sidebar for links to many other bloggers participating in the challenge. 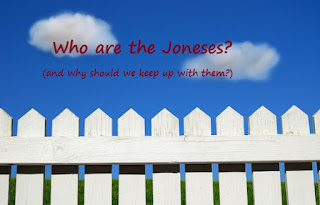 Who are the Joneses, and why are we trying so hard to keep up with them? The phrase "keeping up with the Joneses" refers to comparison with your neighbor as a benchmark for social status.  And the way it leads to a materialistic arms race of conspicuous consumption -- big house, shiny car, designer clothing, exotic vacations, on and on and on -- as people confuse cause and effect.  It's a great advertising scam -- if I buy the fancy things, that will give me the higher status.  As Will Rogers put it back in the 1960s, "Too many people spend money they haven't earned to buy things they don't want to impress people they don't like."  There's a corollary, too, that you don't know if the Joneses' life, that looks so glamorous from the outside, is actually happy on the inside. They could be broke.  But when we lived in suburbia, it was definitely a thing, that nearly inescapable competition.

When we first moved onto the boat, we hoped we were done with that.  But we found that "keeping up with the Joneses," or at least, making assumptions about peoples' status based on outward appearances must be a human nature, because the maritime variation of that theme is all around us.  Its neither better nor worse than the suburban version, just ... different.  To a certain extent, people group themselves by boat type -- although we all are doing this because we love the sea, people in small fishing boats meant for day use or maybe a weekender are not going to have that much in common with the goals of people who are in the process of traveling around the world by sailboat, and someone in a 100-foot shiny megayacht is probably not going to talk to the likes of us. Unlike the hypothetical Jones family in suburbia, where outward appearances don't necessarily give a true picture of the real condition of their quality of life, the different boat types in the marina give a pretty good indication of the owners' priorities and plans -- and the size and age of the boat is a good proxy for finances.

In some ways, in a marina the Joneses comparison is even more in-your-face than it is in suburbia.  Neighborhoods tend to be at least somewhat homogeneous and houses within them are similar in cost; it's rare to find an old cottage or bungalow next to a McMansion. In a marina, the boat docked in the slip next to you may be new and glossy or one step away from sinking, fast or slow, power or sail ... and may be sailing away again tomorrow.

Where we finally did escape the keeping up with the Joneses, was when we started cruising, actually traveling around by boat. In an anchorage, no one ever asks you what do (or did) for a living.  Many of our boat friends, we don't even know their last names, they are just first name, boat name: "Joe and Sandy on Windswept." There is almost a reverse status thing going on: the only "keeping up with the Joneses" we encounter is how far you've traveled, and often the older, sea weary boats earn more prestige than the new shiny ones with wealthy but inexperienced owners.