Blogging from A to Z: X is for eXpressions


During the month of April last year, I participated in the A to Z Blogging Challenge - one alphabet-themed post per day (except Sundays).  I had such a good time with it that I'm doing it again this year.  I'm loosely organized on the theme of downsizing, minimalism, and small-home living that I've learned in 14 years of living on a small boat.  I'm starting with A is for Anchoring Out, Anger-ing Out, and ending with Z is for Zout and Zwarte Peper (Dutch for salt and black pepper). Click on the A to Z logo on the lower left sidebar for links to many other bloggers participating in the challenge.

For "X" I really wanted to do "X marks the spot" on pirate treasure maps. But I get so tired of explaining that galleons weren't pirate ships.  In fact, they were pirate targets, for their contents. But pirates wouldn't really want the ship; it's too slow, not maneuverable enough to be a great fighter, and needs too many crew.  Of course, the captured galleon may be in better condition than their own ship; you know, they're pirates, they may not have done the regular maintenance on their own ship because they're not anticipating a long life span!

Anyway... on to expressions.

Intriguing to hear that many of our common expressions originated in the work world of several hundred years ago.  Fellow A to Z blogger Counterweight Press explained how the phrases "all out of sorts" and why we call letters "upper case" and "lower case" (go to the comments in the previous linked blog post) came from his world.  A couple of weekends ago four curious visitors to El Galeon asked me what phrases came from our ship.  They were a great audience, every time I walked them through one their eyes got big and they smiled and nodded appreciatively. Here are a few of the phrases I told them: 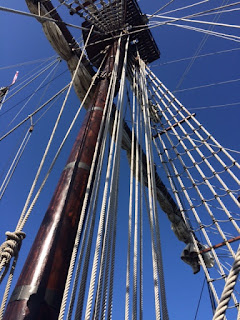 Learning the ropes: Our ship has 6 miles of rope rigging. The first thing a new recruit must do is understand which does what, to raise or lower or otherwise adjust the sails.  So today when you start a new job, it takes a few months to "learn the ropes." 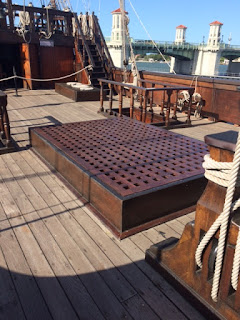 Down the hatch: This is the cargo hatch on the main deck.  They would remove the grill and use ropes and pulleys to lower items two levels down into the cargo hold. At the end of the day, when you chug your beer and say "glug, glug, down the hatch," this is the "hatch" where that expression comes from. 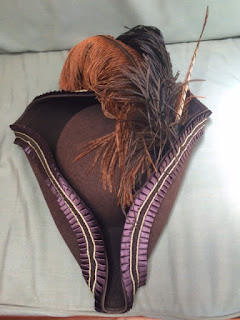 Feather in your cap: The plumes in my tricorn (depending on where and when you are) signify that I've acquitted myself honorably in battle, or that I'm an officer. So now when you complete a project that looks great on your resume and enhances your reputation, it's a "feather in your cap." 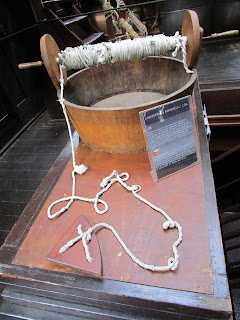 Knots: To measure boat speed, they throw the wooden end off the stern of the ship and as they sail away the line unreels. There is a knot tied in the line every 50 feet, and they’d count how many knots slip between their fingers in 30 seconds. 50 feet in 30 seconds is 100 feet in a minute. 60 minutes in an hour, 6000 feet = 1 nautical mile per hour, and that’s why we measure boat speed in “knots” even today.

Lock, stock, and barrel: This is my replica 18th century flintlock pistol (a bit late for the galleon period, but it's the only one I could find that was Spanish-made).  It has 3 parts: the flint-and-steel spark-producing mechanism is the "lock;" the handle is the "stock;" and the gold-colored "barrel." So when we describe "lock, stock, and barrel," we mean you have the entire thing.

Flash in the pan: A small amount of gunpowder is placed in the outer part of the flintlock firing mechanism, called the pan. The spark ignites this, and it in turn ignites the larger amount of powder that is placed in the barrel to propel the musket ball.  But sometimes there is a misfire and the powder in the pan ignites but fails to set off the remaining powder, resulting in a "flash in the pan" meaning something showy but that fails to have lasting or significant effect.

(Note there are many more nautical phrases that have made their way into common English, though some of them come from a later period than our galleon.)