Part of what seems to intrigue people about our life afloat is how we can squeeze a 21-st century life into the tiny space of a boat. After writing a couple of stories about how liveaboards cope with extreme space constraints, I thought it only fair to present the other side of the coin, a liveaboard who didn’t let square footage constrain her at all.
For many liveaboards whose passion is boats and the sea, no space-related compromises are necessary. Many other liveaboards tailor their lifestyles to the space by giving up some land-based luxuries or hobbies. (To pose an extreme example, I don’t know of anyone who has a billiard table or model railroad on their boat.) But local liveaboard silversmith and fiber artist Brenda Rajkovich and husband Matt, a Marine Lt Colonel did the opposite, -- they adjusted their expectations of life aboard, and even their choice of boat, to have a place for the art which is her passion. When something really matters to you, you make space in your life to make it work. “My art is part of who I *am,* not just something I *do*,” she explains. 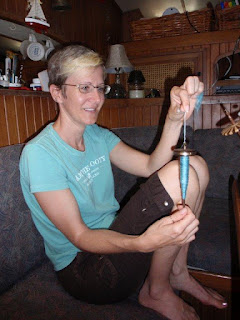 [photo: Brenda demonstarting a "drop spindle" for making silk yarn in the main salon of their boat]
Moving aboard and cruising was something Matt and Brenda thought they’d be doing after retirement. But life afloat doesn’t always coincide with long-range plans. Three and a half years ago, Matt was stationed in Iraq when he learned that his next assignment was going to be at the Pentagon. They started researching the DC area in preparation for the move and learned that for the price of a small condo inside the Beltway they could buy a boat – and have about the same amount of living space (!) – so they decided to accelerate their liveaboard plans. Back in the States, Brenda researched boats with the help of friends and a yacht broker who she said “treated her like a daughter (or maybe a granddaughter?)” and communicated with Matt -- still in Iraq -- by email. One of the more unusual constraints that she presented to their broker, the late Bill Marrow of Adventure Yachts, was the need for a dedicated space to serve as a studio, and storage to accommodate jewelry making supplies, glass kiln, and even a spinning wheel. They settled on the traditional lines of a 43-foot PanOceanic pilothouse cutter built in 1982 that they named “Surly Mermaid” and share with their yellow Labrador retriever Leo. The deal was closed while Matt was still overseas. “I’d seen pictures that Brenda emailed me,” he said, but they owned the boat before he ever set foot on deck. They estimated that as much as 40-50% of their total storage is devoted to supporting her creative endeavors. Brenda admitted ruefully, “If reading was my hobby, we could have gotten a much smaller boat.”
Living on the water has influenced her art. “I was setting up a collection of jewelry for a show,” she said, “and when I saw it set up it was like, OMG, it’s all blues and pearls.” I also saw a lot of silvery swirls, echoing ocean waves, in the current work spread out on her work table the day I visited, as well as the pieces displayed on her website. Living aboard has also influenced the kinds of art she is doing. When they lived on land, she had a separate building for a studio and she did more variety of arts – basketweaving, painting, quilting – that all require lots of supplies and space. The biggest change in her way of life, she said, was deciding how to limit herself to just a few of these arts as part of the move aboard. She kept jewelry making because it was her number one priority, and she retained knitting because it was both relaxing and not so space intensive. That practicality went somewhat by the wayside as she is constantly discovering new ways of expression; she recently discovered fused glass. 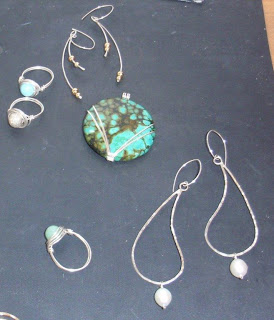 [photo: the ocean-influenced jewelry on Brenda's work table the day I visited - blues and greens and pearls and swirls]
These days, a watch berth in the sunlit pilothouse is her main studio. The creativity in this couple isn’t limited to artist Brenda. Husband Matt’s creativity is seen in the storage ideas here. It is evident in the work table he designed and built that swivels and stows. A wall organizer for nautical signal flags has been repurposed, now beads and wires and other supplies are neatly pigeonholed in it. In a real-life swords-into-plowshares analogue, jewelry-making tools are organized in a case originally designed for an M-16 rifle. 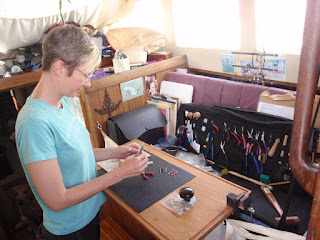 [photo: Brenda at her work station in the pilothouse]
Brenda gives Matt credit for not stopping her from bringing things aboard – a recent acquisition is a metal-rolling mill, both heavy and large – although he applies the efficient thought processes of his military career to help prioritize purchases, with a decision matrix that considers both how often something is used and how important it is to creating her vision. Although Surly Mermaid was purchased with an eye toward creative opportunities and space is large, it is still finite.
What’s next? They are currently in the process of designing a custom bluewater 61-foot aluminum schooner. Integral to the design is a “trade space” – a large open area that could be an art studio, a space for teaching spinning, or a cabin for charter guests. Their dream is to take the boat across the Atlantic to cruise the Mediterranean, but, says Brenda, that’s flexible. “If we never leave the Chesapeake Bay, I’m okay with that, too.” What’s not flexible is that they will always make room for her artistic endeavors. 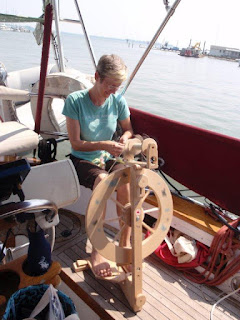 [photo: the cockpit on a sunny day is a relaxing place to spend time with the spinning wheel]